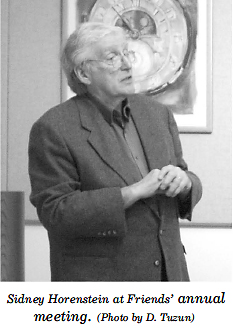 The “other lives” of David Bates Douglass (1790-1849), first chief engineer of the Croton Aqueduct, and his successor, John Bloomfield Jervis (1795-1885), apart from their Aqueduct service, were the subject of Sidney Horenstein’s wide-ranging talk at the Friends’ annual meeting on March 30 at the Irvington Public Library. Mr. Horenstein is Geologist and Environmental Educator Emeritus at the American Museum of Natural History and a popular tour leader and speaker on New York’s history and physical environment.

Douglass was born in Pompton, New Jersey. After attending Yale, he received his initial engineering training as a second lieutenant in the Army engineers in the War of 1812. In 1815 he joined the mathematics and engineering faculty at West Point, which had the country’s only academic engineering program at the time. He was a busy consulting engineer as well. In 1820 he accompanied the Lewis Cass Expedition to find the headwaters of the Mississippi River, later publishing his surveys and important geology and botany findings, and in 1825 he became construction supervisor of the western section of Point in 1831 to work on New Jersey’s Morris Canal, built to bring coal to New York across the rugged topography of Pennsylvania. To achieve this he devised a mechanism using an inclined plane that greatly reduced the number of locks required and thus the cost and difficulty of the project.

Douglass’ reputation grew as he worked on a variety of subsequent projects. As professor of civil architecture at New York University, he designed its first building, the University Building, using Sing Sing marble. Probably his best-known project, following his service on the Croton Aqueduct (1833-36), is the artfully landscaped design of Brooklyn’s famed Green-Wood Cemetery (excepting its monumental gates), which influenced cemetery design for decades. From 1841 to 1844 Douglass served as president of Kenyon College “in the wilderness” of Ohio.

A highlight of the talk were stories of some of the 19th-century figures associated with Douglass and Jervis. Andrew Ellicott, a leading American surveyor and Douglass’ father-in-law, preceded Douglass in the latter’s faculty position at West Point. Ellicott made the first topographic survey of the Niagara River and Falls, and revised and completed the plan for the District of Columbia after George Washington fired Pierre L’Enfant from the job. Douglass’ uncle, David Stanhope Bates, had been an assistant engineer on the Erie Canal, and Benjamin Wright, chief engineer of the Erie Canal, was a close friend of the Jervis family.

John Jervis was born in Rome, New York. Like many engineers of the time he received his training under Wright in what some called the “Erie School of Engineering,” rising through the ranks to become a resident engineer on the canal while building an estimable reputation for his careful and practical approach to the work. He made his mark in canal and railroad engineering and innovative locomotive design on such projects as the Delaware and Hudson Canal, Mohawk and Hudson Railroad, and Chenango Canal. His use of a swivel mechanism instead of fixed front wheels on locomotives, to permit easier turning, had a profound effect on future locomotive design – as his later, innovative design of the Croton Dam influenced dam design throughout the U.S.

While still chief engineer of the Croton Aqueduct, Jervis helped design Boston’s Cochituate Aqueduct and from 1847 to 1850 was chief engineer and then consulting engineer for the Hudson River Railroad. He was later consulted on the construction of the Panama Canal and invited to review plans for the New Croton Aqueduct. The town of Port Jervis in Orange County, New York, is named in Jervis’ honor for his service as chief engineer on the Delaware and Hudson Canal.