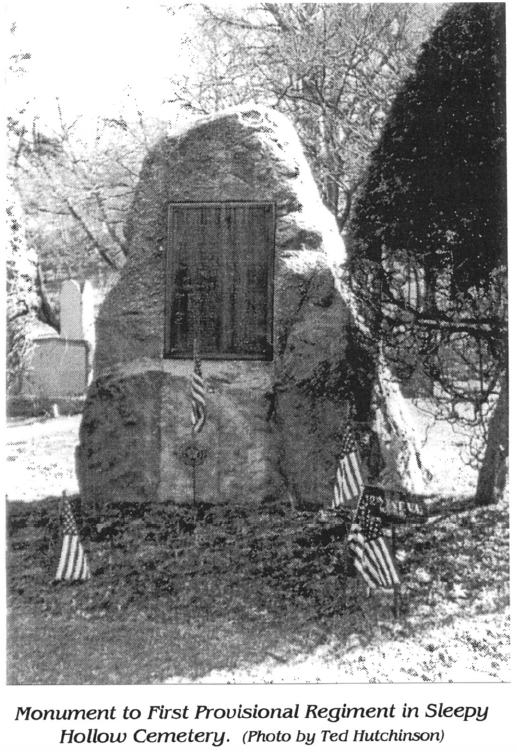 In light of strengthened security for the New York City-Westchester water supply system following the September 11th attacks, we reprint here from our December 1998 issue the text and photograph of a great stone monument in Sleepy Hollow Cemetery (feature 17 on the Friends' map) to those who guarded the water supply during World War I. Thanks to Louise and Ted Hutchinson of Sleepy Hollow for originally providing this material.

Walk north a bit shortly after entering the main gates of the cemetery on Route 9 to visit the monument. The plaque reads:

as a memorial to those who made the supreme sacrifice in the service with the
First Provisional Regiment guarding the 100 miles of the water supply system of
the City of New York from Ashokan to Hillview during the Great War.

Additional information has been gleaned from a 1962 news clipping. According to this source, Private Frank DeCosta died in a field hospital in Ossining of influenza, and the 40 names inscribed on the monument are the casualties of the First Provisional Regiment. Listed on the other side of the monument are the military units that participated in the Regiment.

The same article states that 8,000 enlisted men and 150 commissioned officers guarded the water supply; that the Reverend Charles Baldwin, for 37 years rector of St. Mary's Episcopal Church of Scarborough, was a chaplain of the regiment; and that the monument was unveiled on March 23, 1919 on a plot donated by William Rockefeller (whose estate, Rockwood Hall, was nearby).