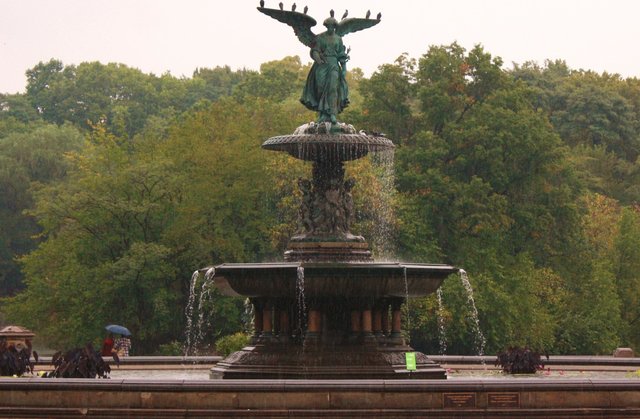 While every New Yorker is familiar with the magnificent fountain at the center of Bethesda Terrace in Manhattan's Central Park, few are aware of the fascinating story behind its creation.

Over the past century and a half, Central Park has accumulated 29 sculptures commemorating various historical and fictional characters, from Balto the Sled Dog to Alice in Wonderland and Poland's 15th century King Jagiello. But when Frederick Law Olmstead and Calvert Vaux originally submitted their 1858 master plan, they only called for one monument. The subject of this important sculpture was not, as one might expect it to be, a Founding Father or New York political figure. Rather, they chose what they considered the most significant moment in New York history: the 1842 opening of the Old Croton Aqueduct.

Today we may take our water for granted, but late 19th century Manhattanites understood that without the Old Croton Aqueduct, New York would never become the great city it hoped to be. The Water Terrace Fountain, as the Bethesda monument was originally known, would celebrate the birth of a great Metropolis. To Olmstead and Vaux, memorializing the Old Croton Aqueduct, which brought fresh, clean water to the city, was of a piece with their vision for Central Park as a place where ordinary people could free themselves from the miasma of crowded slum conditions and breathe good, clean air.

The Central Park Commission chose an unlikely sculptor to complete the fountain project: Emma Stebbins, born in 1815 to a wealthy New York City family, was a relatively unknown artist and the first woman to receive a commisison for a major work of art in New York City (That Emma's brother Henry Stebbins was president of the Central Park Board of Commissioners may have helped her to secure the coveted job.)

Emma Stebbins was an open lesbian whose intimate cicle included many of the colorful bohemian celebraities of the day including actress Mailda Hays and African American/Native American sculptor Edmonia Lewis.

Rather than memorialize the engineers or workers who constructed the Croton Aqueduct, Stebbins chose to go with an allegorical image: Her 1872 design for the fountain called for an eight-foot-tall bronze neoclassical angel. This physically imposing figure holds a lily, representing purity. The four cherubim below the angel represent health, purity, temperance and peace. At the time of the sculpture's dedication in 1873, this particular imagery would have been understood to reference the temperance movement. The installation of public water fountains. in fact, was a major goal of the National Woman's Temperance Union's organizing convention of 1874. So while today we might see the Bethesda Fountain as an example of staid civic peity, viewers of Stebbins' era would likely have identified this monument specifically with a political movement led by powerful women. (Leaders of the temperance movement would later form the militant core of women's suffrage organizations.)

Yet behind the larger themes, there is a much more personal and emotional story.

At the dedication of the Angel of the Waters in 1873, Emma Stebbins quoted a passage from the Bible:

"Now there is at Jeruslaem by the sheep market a poool, which is called... Bethesda... whoever then first after the troubling of the waters stepped in was made whole of whatsoever disease he had." John 5:2-4

Her audience might have seen this as a reference to the ravages of cholera before clean Croton Water arrived in the city. But the sculptor herself might have wanted to convey other, more personal concerns. The angel's face bears a strong resemblance to Stebbins' lover, the famous stage actress Charlotte Sanders Cushman. At the time, Cushman was dying of breast cancer. Perhaps Stebbins put her own passionate hope for healing and rebirth into her best-known work. Cushman died in 1876, three years after the statue's dedication.

So the next time you visit Central Park, take another look at this fascinating monument, one of the lesser-known tales of the Old Croton Aqueuct.