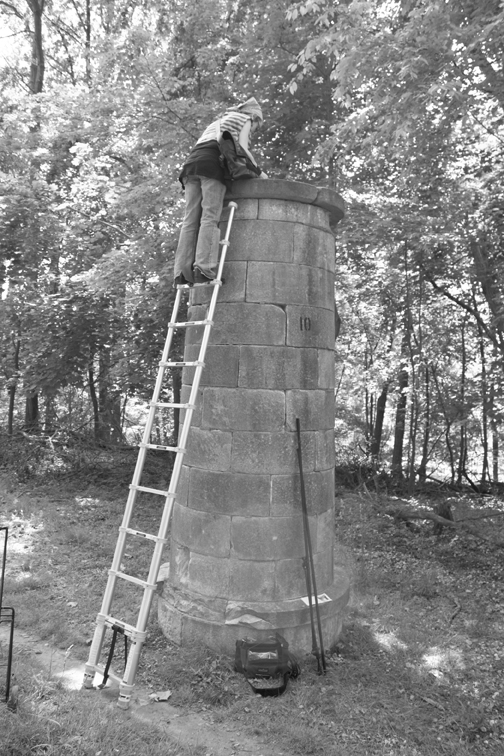 Ever since the days of the Hudson River School, the landscape of the Rivertowns has inspired artists’ attempts to capture on canvas our unique golden Hudson River light or the classical drama of the Palisades cliffs. Walking the Old Croton Aqueduct trail today, you might still encounter latter-day plein-air painters working in that age-old visual arts tradition.

But if on a recent weekend you saw a small woman atop a telescoping ladder dropping a microphone into one of the ventilators on the trail, you witnessed an entirely different form of artistic process in action.

“When I received a phone call last December from a young woman telling me she wanted to record the sounds inside the Aqueduct, I asked myself ‘What sounds?’ ” recalls Friends President Mavis Cain. “The whirr of bat’s wings? The ghosts of past workers on the aqueduct? A message from John Jervis!?”

Nevertheless always ready for anything Aqueduct-related, Mavis and Elisa Zazzera agreed to open the weir chamber in Ossining to electronic music composer Paula Matthusen. “After an hour of ‘silence’ – except for our occasional whispers –with Paula crouched on the floor with her sound equipment, and computer and with Elisa taking photos, the project was not much clearer to us… but we were hooked on what might happen!” says Mavis.

“I’ve been recording sounds related to various historical architectural spaces in New York and using them to create soundscapes,” explains Matthusen by phone from Inwood. “A soundscape is the unique acoustical signature of a location. Each space has its own particular qualities or ‘colors’ determined by the materials of construction, the shapes of the spaces and their interactions with the outside world.”

Matthusen, Assistant Professor of Music at Wesleyan University and the recipient of numerous awards, including a Fulbright Scholarship, is a composer of what is sometimes called “electro-acoustic” music or “sound art”, which often uses “found” or recorded sounds instead of performers on instruments as the raw material of the work. The high-quality recordings of unique sounds become the “soundmarks” – the audio equivalent of brushstrokes – of a composition. Her compositions have been described by The New Yorker’s Alex Ross as “entrancing,” and Steve Smith of The New York Times highlighted her “vivid imagination” in a review of one of her concerts.

Matthusen began her sonic explorations of architecture and history last year at the Cloaca Maxima (the ancient sewer in Rome) and the Atlantic Avenue tunnel (the first subway in New York City). But it wasn’t until she began listening to the Old Croton Aqueduct tunnel that Matthusen realized she had found her greatest muse. “I was surprised how the different materials of the construction of the Aqueduct tunnel -- the granite, red brick masonry, cement -- each one yields a very different sound. The granite is a little more porous; when we were recording where the roof was granite we got sounds of water dripping through the granite into the aqueduct after rain.”

At one point during her tour of the Weir, Matthusen accidentally recorded a snippet of Mavis’ voice echoing in the tunnel. “Her voice sounded beautiful in the space,” says Matthusen, enthusiastically. She played back the recording of Mavis’ voice and then recorded the sound of that recording echoing in the space. She then played back this recording and documented that sound again. She repeated this process of recording copies over and over, in a technique developed in the 1960s by composer Alvin Lucier. “Eventually what happens is that the original material is obscured, but what you end up being left with is the resonant frequencies,” Matthusen explains. “The Friends are so passionate – using this recording was a way of acknowledging the commitment of people in this way… the interaction between past and present.”

A few weeks later, Friends Vice President Robert Kornfeld took Matthusen and her assistant Néstor Prieto on a day-long tour of the trail, from the Old Croton Dam to many of the most easily-accessible ventilators. Kornfeld loves exploring the Aqueduct, “especially with people that have particular interests,” he says. “I had never thought what the acoustical personality of the aqueduct would be like. The different ventilators have a very different character acoustically, depending on their location. The dam had an incredible sound, as if the water pouring down the spillway has a resonant frequency with the whole dam. The whole thing hums. It’s just a completely different way of experiencing the system that we had never thought of.” Part of the thrill comes from the discovery of a hidden world beneath our feet.

At the end of the long day, Matthusen sat down to listen to the results. “At one point, we were right by a school. There were children running around, busses going by, a typical day in the neighborhood,” she explains. They took a telescoping ladder and leaned it up against the ventilator. Then they mounted a microphone on a long boompole and held it over the ventilator and slowly lowered it into the tunnel. “At one moment, you’re surrounded by daily life and then you’re descending into this mysterious moment of discovery. There’s a whole other world underground. It was exhilarating.”

A few weeks ago, Matthusen played back all of the ventilator recordings she had so far into the acoustic space of the High Bridge Water Tower, thanks to the collaboration and support of the NYC Department of Parks and Recreation, in particular from Chief of Operations Namshik Yoon and Associate Urban Designer Ellen Macnow. “I wanted to bring the sonic terrain of the distance traveled by the aqueduct to an appropriate destination point.”

Paula’s work is about opening oneself up to listening in new ways. “I’m trying to think about the Aqueduct in a different way — to show that the spaces themselves are still active in a manner that extends beyond the original use or purpose of the structure, but nonetheless reveals an acoustical liveliness of the space.” These captured sounds will become the raw material of an electronic composition that may or may not be performed with live musicians. The working title of her current composition is “Eden's arch of promise bending,” after a lyric in the original Old Croton Aqueduct Ode that was performed in 1842 when the Aqueduct was first opened. “I liked that even on its opening the OCA had a song written for it! It was a transformative moment in the city's history, a backbone had been constructed.” Matthusen’s composition will have its premiere at Ear to the Earth Festival hosted by the Electronic Music Foundation in October 2012 in New York City. Original support for her project stems from a commission by the Electronic Music Foundation with support from the Jerome Foundation. You may learn more about Paula's work on her website at: http://www.paulamatthusen.com