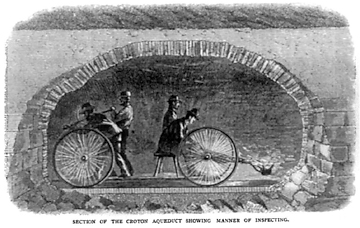 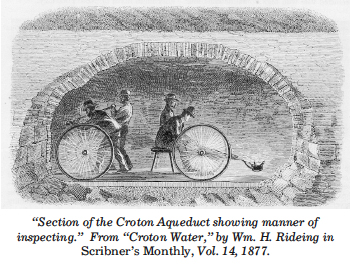 Note: The following excerpts from the chapter “The Extension of the Croton System” by Kevin Bone (pp. 60ff, in “Water-Works: The Architecture and Engineering of the New York City Water Supply,” Kevin Bone, ed., 2006, Irwin S. Chanin School of Architecture of The Cooper Union and The Monacelli Press, New York), convey a sense of the difficulties New York City faced when the original (“Old”) Croton Aqueduct was its sole water supply.

“ . . . The aqueduct itself, much of it located above grade on artificial berms, was exposed to erosion, differential settlement, and to the freeze/thaw cycles of the harsh New York winters. Soon after completion [1842] it became evident that the aqueduct would need constant upkeep. The collapse of retaining walls, the settlement of earth supports, and cracking in the brickwork because of thermal expansion and contraction all resulted in significant leakage. Large quantities of water were escaping from the aqueduct before reaching the thirsty city.

“Cottages were built at intervals along the line so that superintendents could closely monitor the structure. A yearly inspection of the conduit was considered essential; even a small tree root snaking through the brick walls of the enclosure could start a leak that might lead to catastrophic failure. The annual maintenance review took at least three days to perform. A lead engineer, followed by work crews, would walk the entire length of the dewatered aqueduct, from the Croton Dam to the York Hill Receiving Reservoir, noting problems and directing repairs. Each year, the inspection became a time of concern for the city. Because the aqueduct functioned without backup, within the short period of seventy-two hours – the minimum time it took to shut the aqueduct down, drain the structure, and make a few key repairs – the amount of water in the Manhattan reservoirs would rapidly decrease. ‘During the November inspection of 1846 the aqueduct was closed for thirteen days and water levels dropped dramatically in both Manhattan reservoirs, and this was at a time when there were only 12,000 water-takers.* It was clear by 1846 that the city needed additional water storage.”

Bone goes on to describe the planning and construction of an additional receiving reservoir, today’s Central Park reservoir (1862), and writes that “before the New Reservoir could be completed, New York City would be reminded of its vulnerability twice in one year.” Just hours before the aqueduct was to be drained for the 1860 inspection, the two pipes connecting the York Hill and Murray Hill reservoirs

“collapsed into unstable ground as the result of a project to level the grade of Fifth Ave. . . . Water gushed out of the mains and quickly drained both reservoirs. Nearly the entire supply spilled over the adjacent fields. . . . The accident was considered the most perilous moment in the history of the young Croton supply. The chief engineer telegraphed all police offices and ordered a fire watch. The next morning, orders were given to cease all manufacturing and all water supply to ships and ferries. . . .”

Repairs were made within 50 hours. A few days later, “water was found pouring out of the side of the conduit” on a high embankment about two miles south of the gatehouse at the dam. The main gates at the dam were shut, and “when the water had drained away, a crack one-quarter to one-inch wide and 425 feet in length was found on the invert arch at the bottom of the aqueduct.” Working in cold weather, the crew made emergency repairs in 38 hours. According to Bone, the incidents clarified the limitations of the system. These constraints, together with dramatic population growth and other factors, led to “improvements that marked the beginning of the Croton Waterworks Extension.”

The first two improvements to come on line were the second receiving reservoir and, also in 1862, addition of a 90.5-inch pipe to the High Bridge — the 1848 bridge that carried Croton water from the mainland to Manhattan, originally in two, relatively small 36-inch pipes. In the ensuing years a new aqueduct and some dozen dams and reservoirs enlarged the Croton system, today a National Historic Civil Engineering Landmark. *E. Wegmann, “The Water Supply of the City of New York,” 1896, Wiley, p. 48.