Poe readers who still own a copy of his Tales in the Great Illustrated Classics edition from 1952 may remember the dramatic image of a melancholy Poe walking in the snow in his billowing thick cloak, a long straight avenue receding behind him. The landscape on either side, with its barren trees, drops away to nothing in the distance. That is because Poe is crossing the High Bridge on this frosty walk, with the span over the river behind him.

High Bridge, of course, continued the route of the Old Croton Aqueduct from the Bronx across the Harlem River into Manhattan. Construction of the bridge began in 1837, and it was completed in 1848. Poe was then a Bronx resident, living in a tiny cottage on Kingsbridge Road, in rural Fordham Village, just east of the Aqueduct. The Bridge opened on the Fourth of July the year before Poe's death in Baltimore, at the age of forty, in mysterious circumstances.

The picture, which is also on view at Poe Cottage, in the Bronx, is titled, Poe Walking on the High Bridge. It appeared around 1900 as part of a series of illustrations by Bernard Jacob Rosenmeyer (b. 1870, New York City - d. 1943, Yonkers). The artist was well-known in his day as a book and magazine illustrator and a genre and portrait painter.

When I first saw this picture, and learned of its significance for Aqueduct walkers, I thought that Poe's story, "The Imp of the Perverse," must surely have been inspired in part by Poe's crossings of the High Bridge, which, at more than 100 feet above the water, deserves the name. In the story, Poe's narrator describes the perversity in human nature that drives one to commit horrifying acts:

We stand upon the brink of a precipice. We peer into the abyss—we grow sick and dizzy. Our first impulse is to shrink from the danger. Unaccountably we remain. By slow degrees our sickness and dizziness and horror become merged in a cloud of unnamable feeling... the idea of what would be our sensations during the sweeping precipitancy of a fall from such a height. And this fall -- this rushing annihilation -- for the very reason that it involves that one most ghastly and loathsome of all the most ghastly and loathsome images of death and suffering which have ever presented themselves to our imagination -- for this very cause do we now the most vividly desire it. And because our reason violently deters us from the brink, therefore do we the most impetuously approach it. There is no passion in nature so demoniacally impatient as that of him who, shuddering upon the edge of a precipice, thus meditates a plunge. If there be no friendly arm to check us, or if we fail in a sudden effort to prostrate ourselves backward from the abyss, we plunge, and are destroyed.

Poe might have thought of flinging himself off the High Bridge. He and his wife and mother-in-law had moved to the cottage around May of 1846, partly because of Poe's dire poverty, and partly in the hope that the country air would help his wife, Virginia, who was to die of tuberculosis in late January of 1847. Poe's exertions to regain his earlier prosperity as a writer and editor were meeting with failure because of constant bad luck, the rejection of others in the literary field, and his own self-defeating actions. 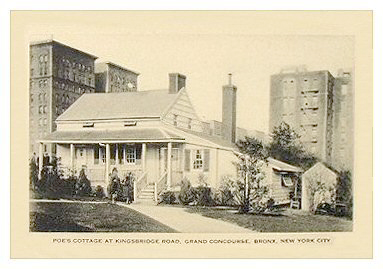 During Poe's residence at Fordham, a walk to High Bridge was one of his favorite and habitual recreations," wrote Sarah Helen Whitman, who, like Poe, was a leading literary critic of the time. In a memoir, she described Poe enjoying the views from the Aqueduct on lonely walks "at all times of day and night, often pacing the then solitary pathway for hours without meeting another human being." Back then, his perch in Fordham, which was becoming more settled as a result of the coming of the New York and Harlem River Railroad in 1841 (the Fordham station is nearby Poe's cottage) afforded a panorama of a bucolic Bronx; his home then stood in an area of fruit trees and pines, and on his walks to the High Bridge (by no means short, they were comparable, say, to a trek from Washington Square to Macy's), a view of Manhattan sprawled away to the south.

But I was wrong about the inspiration for Poe's story. In fact "Imp of the Perverse" dates to July of 1845, before the High Bridge was finished, so it could not have been the scene of that particular frightful inspiration. So much for my theory. Like most of us, Poe likely found the Aqueduct a superior place for escape and contemplation. Indeed, despite the spectacle of landscape and bridge-scape, he was contemplating the cosmos, which he described in his unique way to the world in his late and little-known "Eureka." On the Aqueduct, Poe was not peering down but rising upward in his mind.

The artist behind Poe Walking on the High Bridge may well have understood: B. J. Rosenmeyer lived, at the end of his own life, adjacent to Tibbetts Brook on Midland Ave., right by the Old Croton Aqueduct.