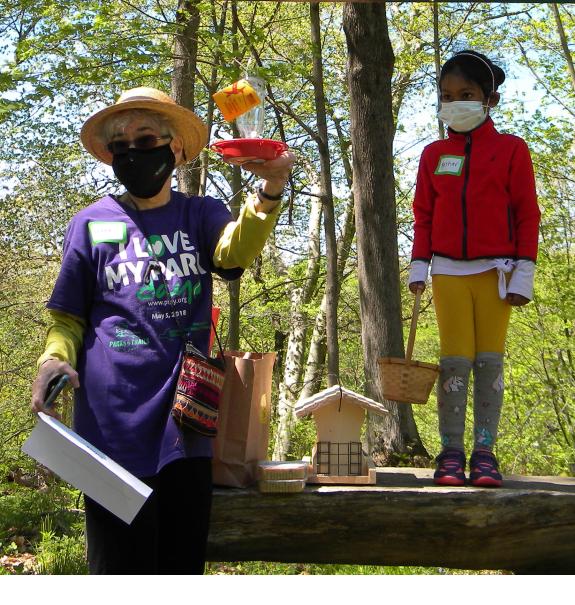 This is to express admiration for and thank you to the volunteers for their contributions to the success of the ninth annual I Love My Park Day on the Old Croton Aqueduct. Every year, there is some special magic that happens on I Love My Park Day. This year the magic was that our many separate but related projects were all done by very local community members, many of whom volunteered after having seen flyers and lawn signs on the trail. New friendships were made by neighbors who met each other for the first time removing invasive plants, the Aqueduct Trail was much improved, and many volunteers reported that, upon returning home, they have made a renewed commitment to remove invasive plants from their properties and then to plant native species to replace them. Here are some of the members of the Quaker Bridge Road sites in Croton on Hudson posing for the traditional group picture.

Since we were spread out with deference to social distancing, here is a comprehensive report about everything that was accomplished on May 1st by the volunteers.

The Croton Dam crew of 6 volunteers and led by Linda Rohleder, PhD, Ryan Goolic, and Kassidy Robinson of the NY NJ Trail Conference’s Invasives Strike Force did an amazing amount of work. They searched 15,681 square feet in the woods above the Aqueduct Trail near the Croton Dam and found 10,408 of them infested with Black jetbead shrubs, managed 126 of them by cutting them down and treating the stumps with a targeted herbicide. 14,810 square feet were infested with Siebold’s viburnum; 136 of which received the cut stump treatment. Quite a feat for a group of nine! Energetic enthusiasm best describes their work as can be seen on the smiling face of volunteer Jaime. 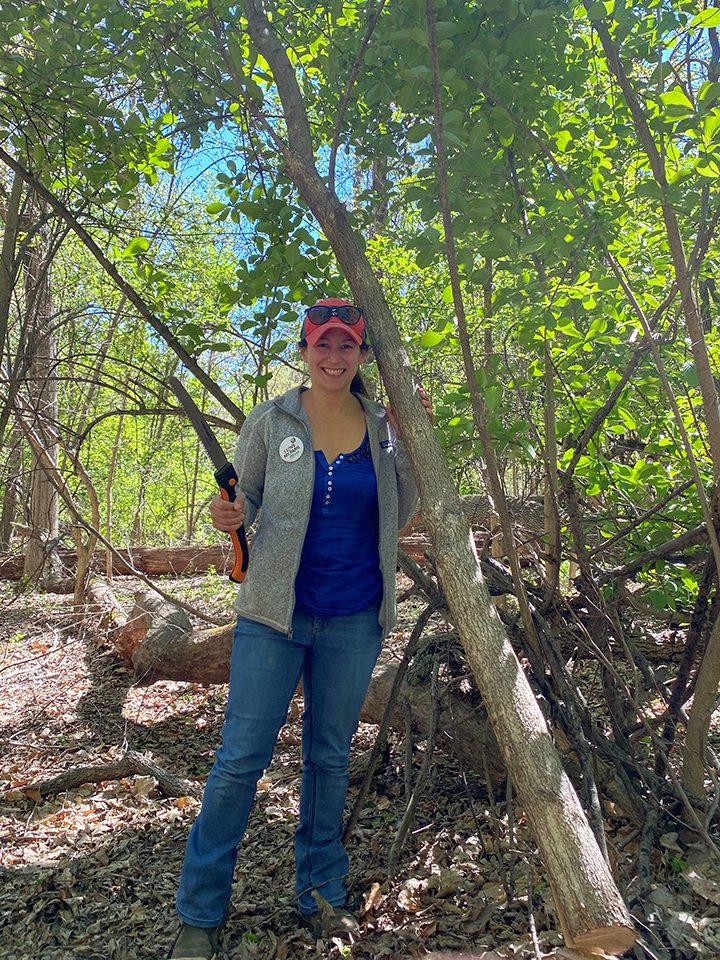 Finding large swarths of native Virginia bluebells nestled in the woods demonstrated to the volunteers the value of doing this work, preserving this wonderful native species endemic to this area. 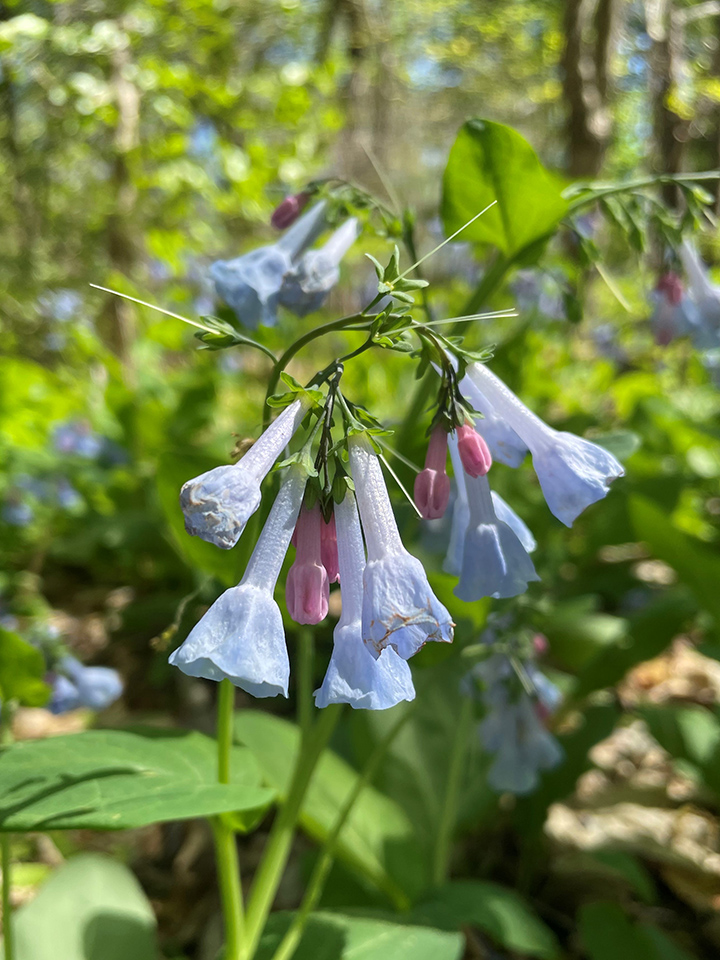 The Ossining group, led by Friend’s member Daria Gregg, who has adopted a section of the trail in Ossining above Gerlach Park, included eight volunteers. They continued Daria’s work of removing invasive plants and restoring with native species. They focused on bushes including privet, multiflora rose, bush honeysuckle, and burning bush, diligently digging up 64 of those invasive bushes. In addition, they filled 20 large garbage bags with garlic mustard, preventing them from taking over the woods and damaging the ecosystem by exuding chemicals that suppress the growth of native fungi, grasses, and herbaceous plants. The culmination of the day: they planted and fenced 10 winged sumac shrubs and 10 grey dogwoods. Dana Levenberg came to encourage the Ossining group. 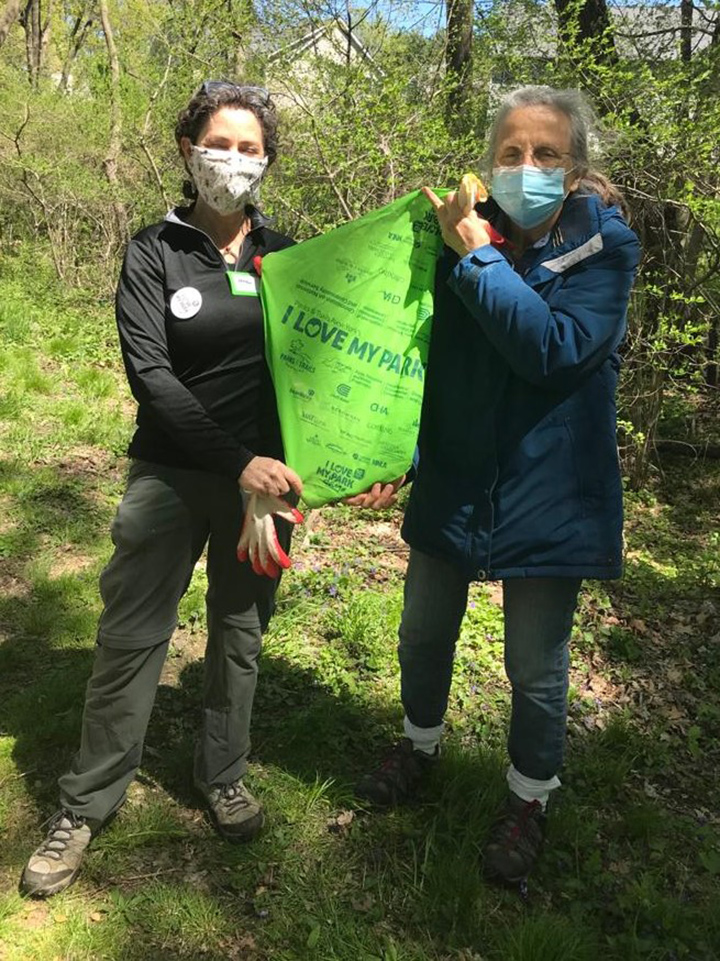 The Quaker Bridge Road East crew, led by Michael Young, a long time ILMPD leader and professional arborist, included 9 volunteers. They targeted vines, bushes, and herbaceous plants, removing a total of 1,022 invasive species. Amazing. Over half of the plants removed were burning bush, including large bushes destined to produce giant seed banks, as well as many small seedlings which had sprouted from the seeds from the large bushes we had removed in previous years. Alice enjoyed posing triumphantly with the truck-load of invasive plants removed, destined not to regrow. 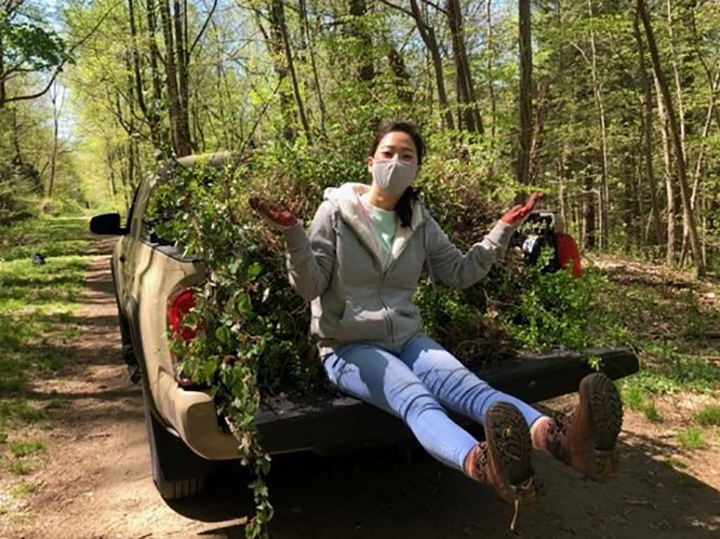 The Quaker Bridge Road group, led by our long time ILMPD crew leader Mary Florin McBride, seen in the photo below, Leigh Draper of Teatown Lake Reservation and Jeniffer Mora, along with Carl Grimm, Board member of the Friends of the Old Croton Aqueduct, included 22 volunteers, mostly families with children who eagerly pulled garlic mustard. 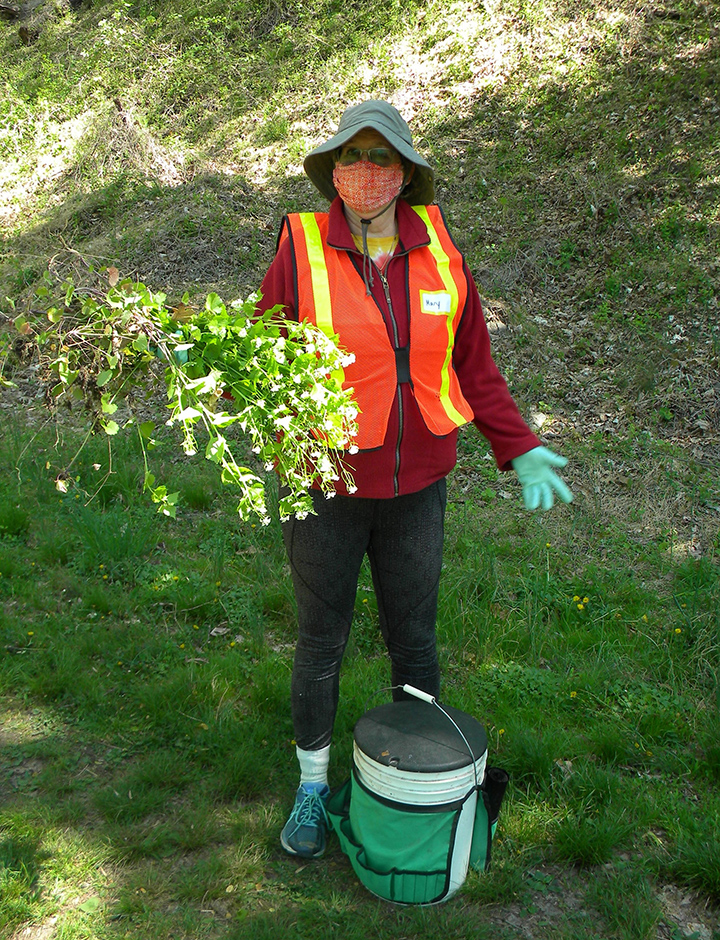 The bags were weighed: a total of 274.5 pounds! An additional 6.5 bags were discovered that were not weighed. Children had fun pulling the easy-to-remove garlic mustard and enjoyed finding native plants growing along the trail including our very special Jack-in-the-pulpit. And then taking a most well-deserved celebratory rest. 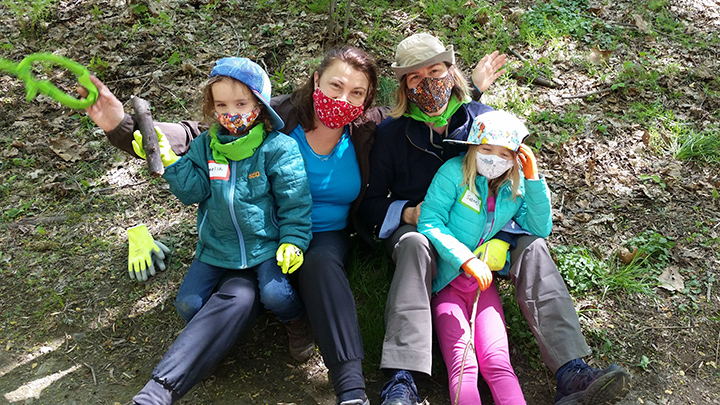 We had our usual lunchtime prize drawing, sponsored by our longtime supporter, Feed the Birds, and our youngest volunteer, Keshar, did the honors as her older brother Yadnesh had done in previous years. The prizes were generous and appreciated by the winners. 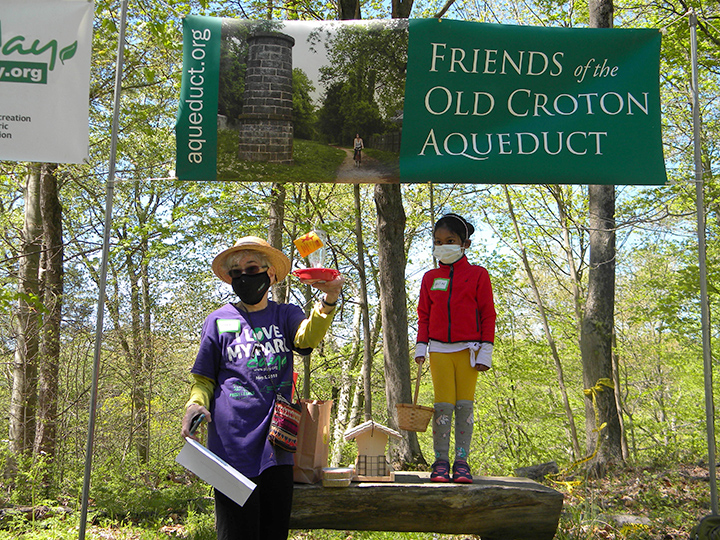 A hard-working planting crew, led by Mathew McDowell, our expert horticulturist, created a small garden right by the parking area, installing 96 native plants in an area where we had removed invasive plants in previous years. 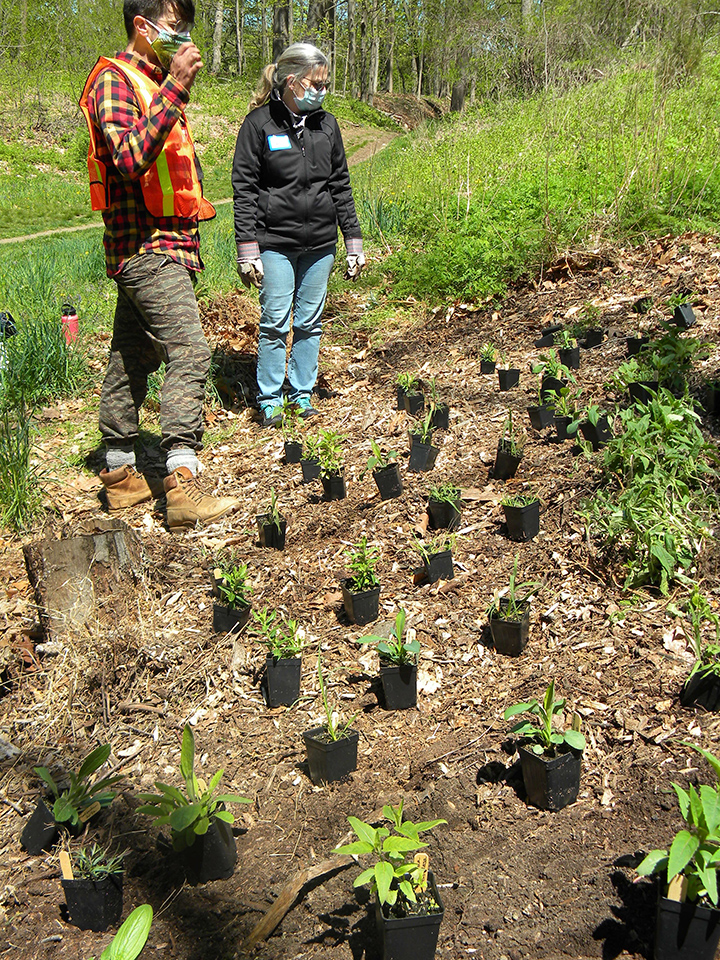 One thing leads to another. Weeding and watering are needed to maintain this special installation; I have been recruiting trail walkers to help. 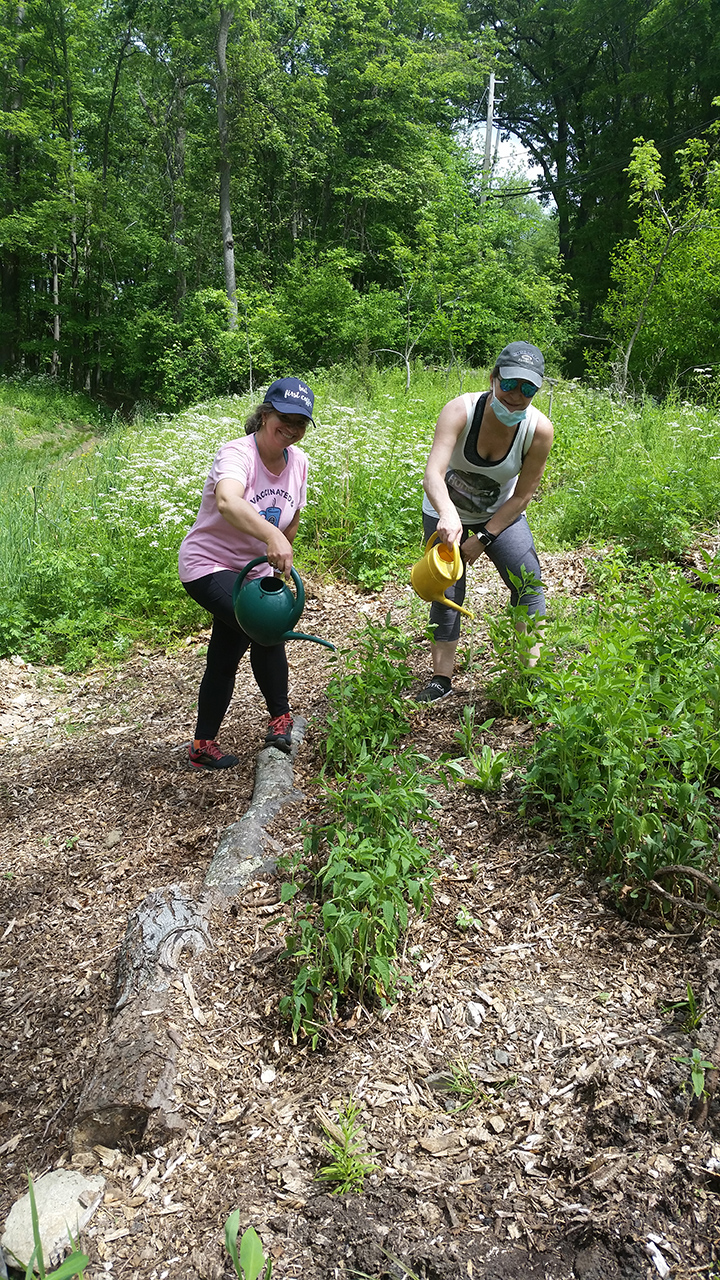 A stalwart group, including our own Guy Pardee, of Suburban Native LLC and other professional arborists, trekked down to the riverside under the leadership of George Profous, the DEC Forester responsible for the Croton Gorge Unique Area. They showed up with garbage bags prepared to remove trash; I traded them for weed wrenches and challenged them to bring back even one bottlecap from the pristine riverside. They removed many prickly, dangerous invasive barberry bushes threatening to take over the Area and potentially providing a safe harbor for ticks. And were then rewarded by a presentation by Croton on Hudson’s Historian, Marc Cheshire, who described the deep and rich history of what once took place at the riverside at the Unique Area; it was the second time that Marc has participated in ILMPD, helping us learn about our fascinating surroundings. When they returned from the riverside, I was presented with one pull tab substituting for the bottle cap I had requested. 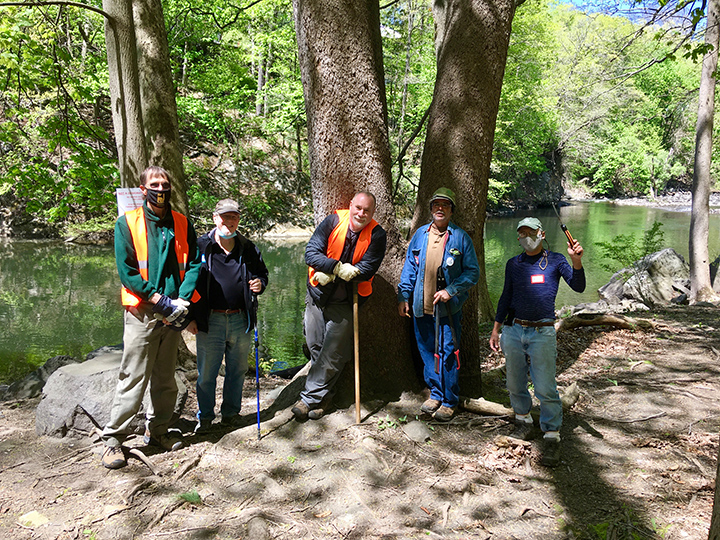 We were very pleased to welcome back our long-time photographer, Tom Tarnowsky, who stationed himself at Quaker Bridge Road and took pictures of families with their children and the prize drawing. John and Lynn Salmon, our other expert I Love My Park Day photographers, took our group photo and then traveled to the river to photograph the work being done there. They also photographed the planting crew and many of the other activities on the Quaker Bridge Road site.

This year, the State Parks Crew, led by Steven Oakes, the Historic Site Manager, eagerly integrated with the volunteers and worked on garlic mustard removal with the families and also participated at the riverside. And then diligently scooped up all of the garlic mustard bags for disposal. Steve worked at both of the Quaker Bridge sites, walking from one end to the other. 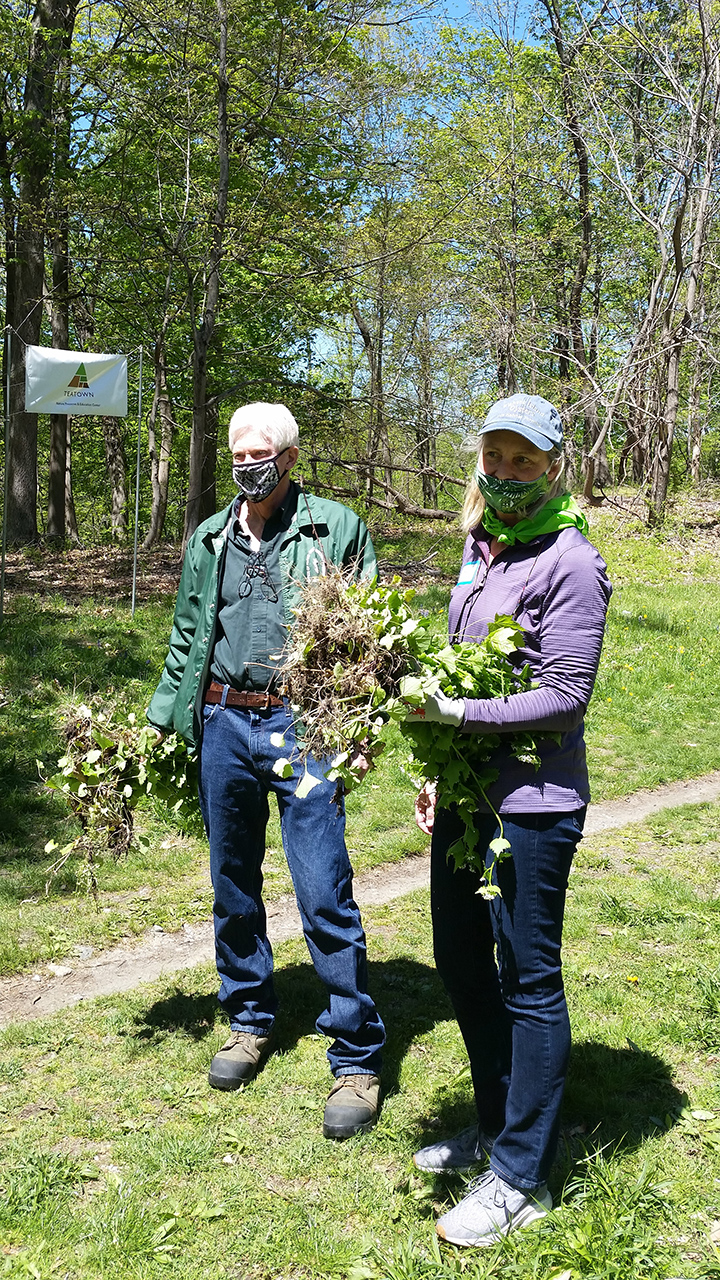 We were honored by the presence of Dana Levenberg, Town Supervisor of Ossining, who came to cheer us on, and James Creighton, Councilman, Town of Cortlandt, both of whom have volunteered at I Love My Park Day in previous years.

We are very grateful to our sponsors including Avalon, Brenda Timm, Realtor, Croton Energy Group, and Hudson View Auto; they helped pay for the supplies and equipment, Baked by Susan provided the delicious breakfast treats, and Green’s Natural Market, provided healthy fruit and snacks to keep us going during the day. Robbins Pharmacy provided professional and extensive first aid kits for each one of our sites, thus guaranteeing the safety of our volunteers. The UPS Store in Croton printed the flyers, gratis, that we posted on the trail and around town and then posted one in its store.

We acknowledge the support we received this year from both Parks & Trails NY which sponsors I Love My Park Day throughout the state and Riverkeeper Sweep which made our numerous sites official Riverkeeper Sweep sites, thus helping with registration and recruitment of volunteers.

We are pleased to announce that for the first time the Friends of the Old Croton Aqueduct also hosted two I Love My Park Day events in Yonkers, one led by Norma Guzman in collaboration with Westchester Parks Foundation in the section of the OCA which runs through Tibbett’s Brook Park. 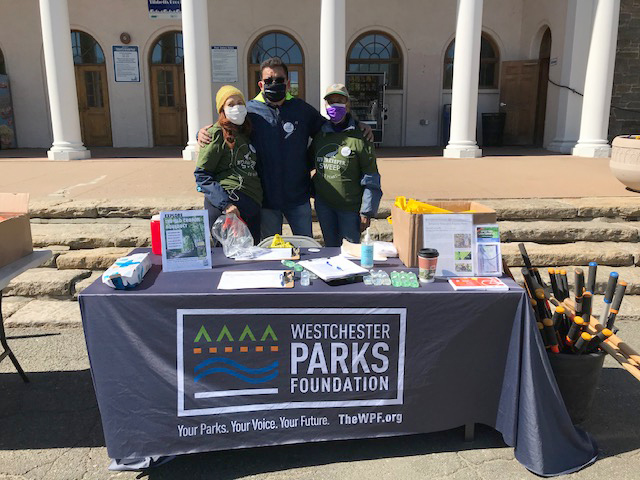 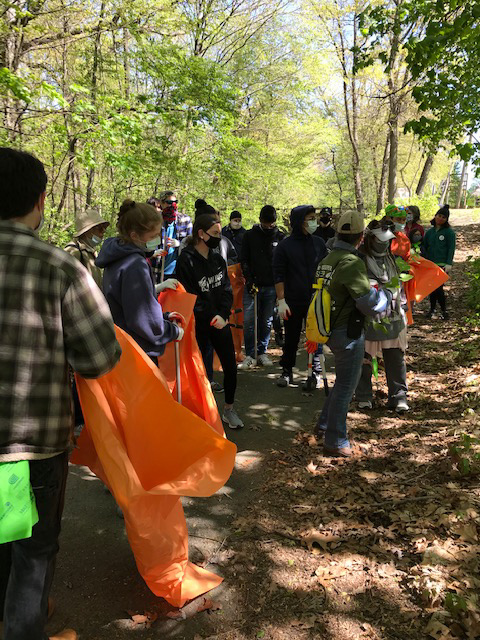 And one on the OCA near the intersection with Wicker Street hosted by the Friends of the OCA board member Lesley Walter. You can see her in the photo below in her pink jacket. Read her creative blog about the event here. 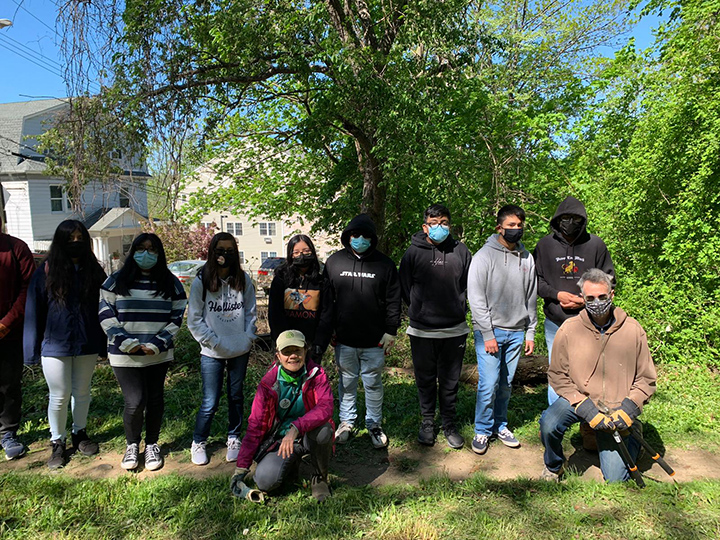 This event was marked by creativity and enthusiasm, with long time Friends’ members Shaun Gorman and Ilona Fabian leading the trash removal contingent, documenting 48 bags of trash removed at 3 pickup points along the trail along with many items too large to be bagged. Wild chervil was a target for removal in this section of the trail: 90 pounds were removed along with 30 pounds of garlic mustard and another 30 pounds of mixed invasive species. 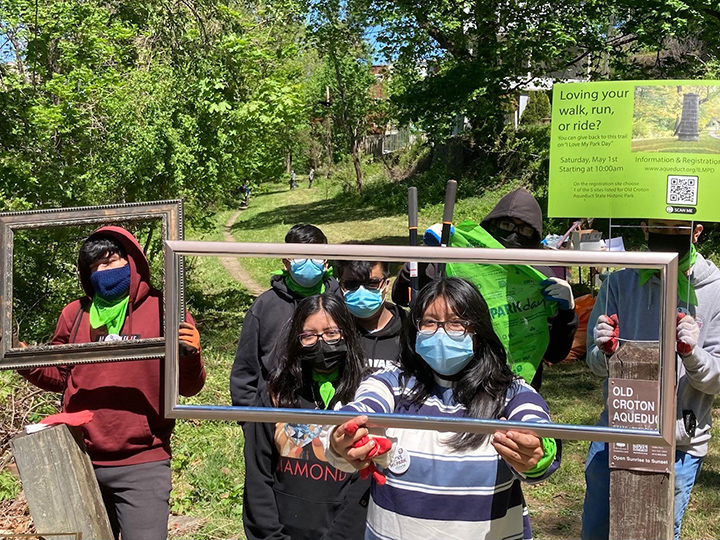 We also facilitated a pop up I Love My Park Day in Dobbs Ferry hosted by the Rotaract Club of Mercy College. 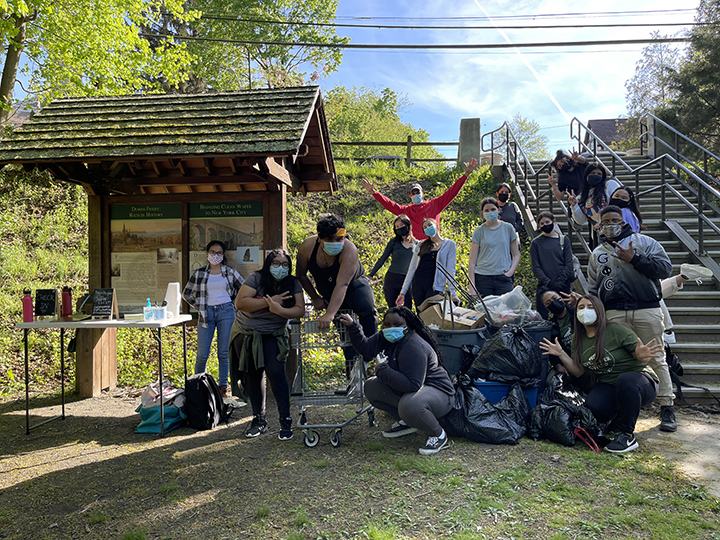 Yes, we are expanding! In the meantime, keep your eyes out for the native plants thriving along the sections of the trail we have been tending and put May 7, 2022 in your calendars for the tenth annual I Love My Park Day. You might even consider adopting a small section of the trail in 2021 and creating your own pop-up events.