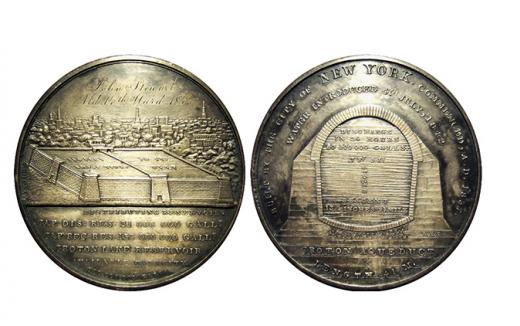 With the completion of the Croton Reservoir and Aqueduct in 1842 the City of New York held what had been called the largest celebration in its history. Part of that celebration included the presentation of silver medals, engraved and struck by New York City medalist Robert Lovett Sr., to individuals involved in the project and the celebration. Exactly how many were awarded is not known but they were awarded to the 17 Alderman as well as other dignitaries. And how many still exist is unknown as they appear very rarely in the numismatic marketplace. But this March I was able to obtain a silver, engraved example that had been unknown to collectors.

A gentleman in Florida contacted me when he found a silver medal among his late father’s belongings. An online search yielded my website and he was looking for more information. His first email did not contain an image so I did not know for sure whether he had a silver piece. Subsequent emails did verify it was an engraved piece, presented to John Stewart, Alderman of the 14th Ward. In our conversations he said his father was not a collector and this was the only medal among the belongings, and John Stewart was not a family member as far as he knew. But he did tell me that his father was a life-long resident of New York City. He had no idea when or how his father became the owner of the medal but here it was.

After a few emails back and forth he did ask what I thought the value was and was I interested in it. Of course I was! After settling on a price I made arrangements for a dealer who was going to be in Orlando to pick it up and was surprised to learn that it came in the original case of issue which the seller had said nothing about. With the addition of this piece to my collection I now know of the existence of six examples of this very scarce medal by Robert Lovett Sr. The New York Historical Society has the piece awarded to “Stephen Allen, 1st Prest. Comrs.”, the example awarded to “R.F. Carmane, Ald. 12th Ward” is in a private numismatic collection, the one engraved to “H.W. Bonnell, Ald. 13th Ward” is still in the possession of a great, great granddaughter, and I own the silver pieces awarded to “George P. Morris, author of the Croton Ode” and “General Hopkins, Grand Marshall”.

Seen on the Trail Dept: Chicken of the Woods