One of our members, Carlos Gee, has walked the entire length of the Westchester trail (thereby earning a PATCH!). His excellent blog, Scenes from the Trail, recounts his multi-day journey, with helpful tips and photos of what he saw along the way. He was kind enough to allow us to reproduce his blog entries on our site. Thank you Carlos!

This is the second leg of my quest to hike the 26 mile Westchester County portion of the Old Croton Aqueduct Trail. You can check out the first leg of my hike here. It was a beautiful day for hiking on this September morning. Temperatures were in the mid to high 70’s and no rain. We parked one vehicle at Gory Brook Road in Sleepy Hollow, which would be our ending point and continued up to Ossining where our hike would begin. Since this section includes several roadwalks and places where the trail veers away from the actual location of the aqueduct, it was imperative to have an OCA map. Our hike started underground with a tour of the Ossining Weir.

editor note: The Friends of the Old Croton Aqueduct offer tours inside the weir, please check out our calendar to see if you can time your walk to one of our tours. 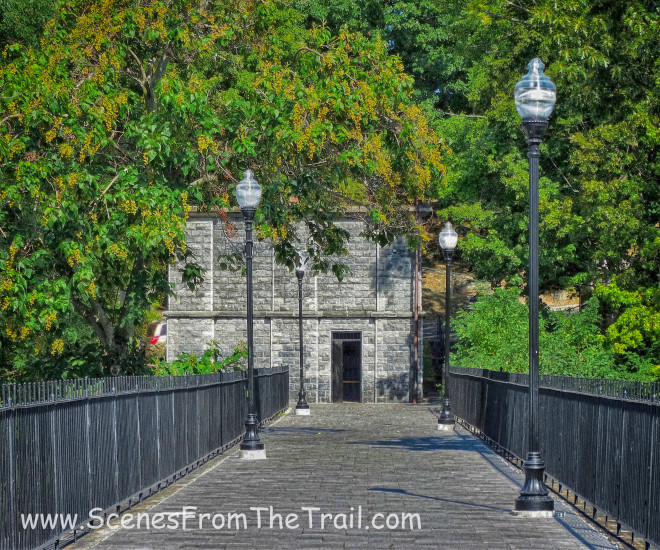 It was cool to see what the aqueduct looked like beneath our feet since we were hiking the trail. 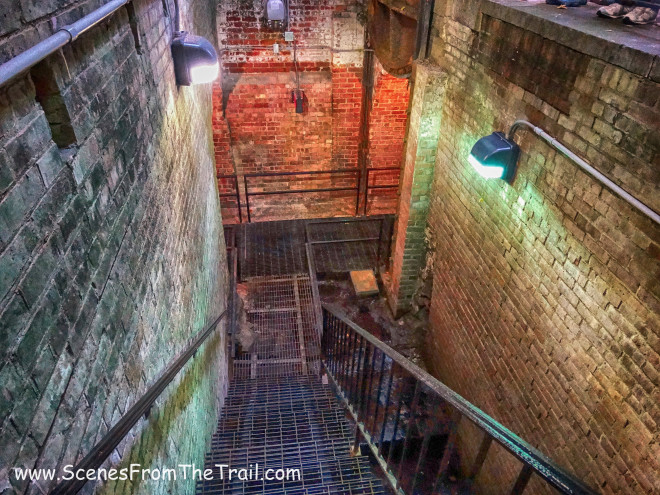 At 5am on June 22, 1842, Croton water first entered the aqueduct. John B. Jervis who was the chief engineer on this project, along with a couple of assistants, took a rowboat dubbed the “Croton Maid” into the newly completed aqueduct to inspect the work with a small amount of water flowing through it. Twenty two hours later they emerged on the Bronx shore of the Harlem River. They could not cross the High Bridge (originally the Aqueduct Bridge) which was still under construction. 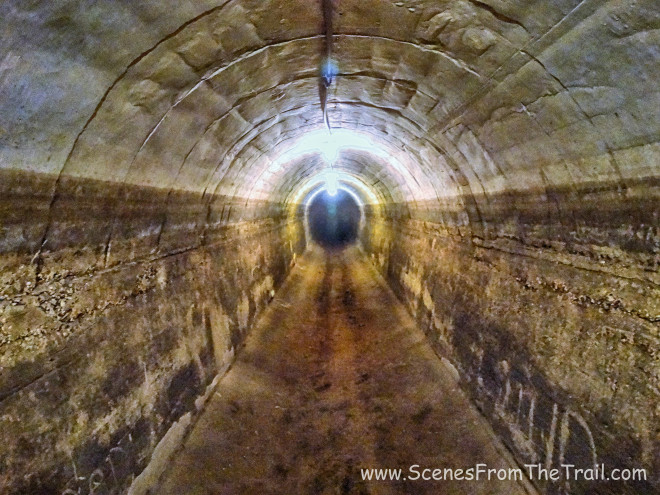 This massive steel door was lowered to cut off or divert the flow of water. 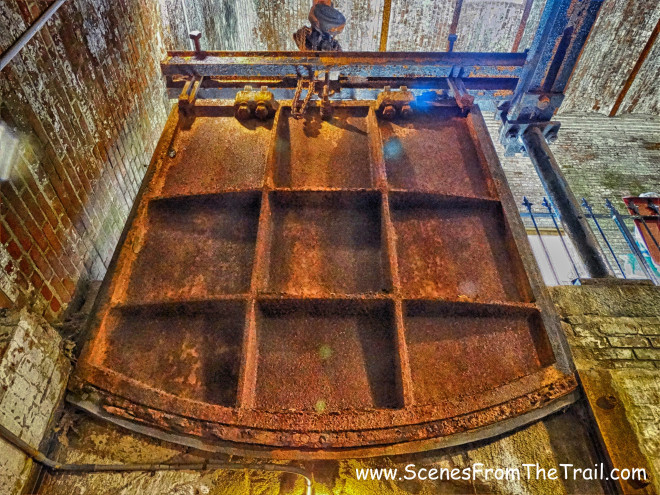 It was pretty cool to see the underbelly of the aqueduct. I was tempted to walk deep into the tunnel, but I prefer to do my hiking above ground. 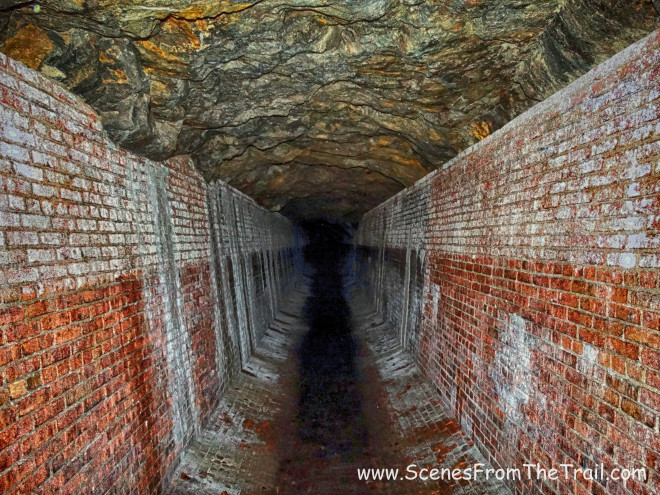 Once satisfied with the images captured underground, we hit the trail. We began by heading south over the Double Arch Bridge which spans the Sing Sing Kill. 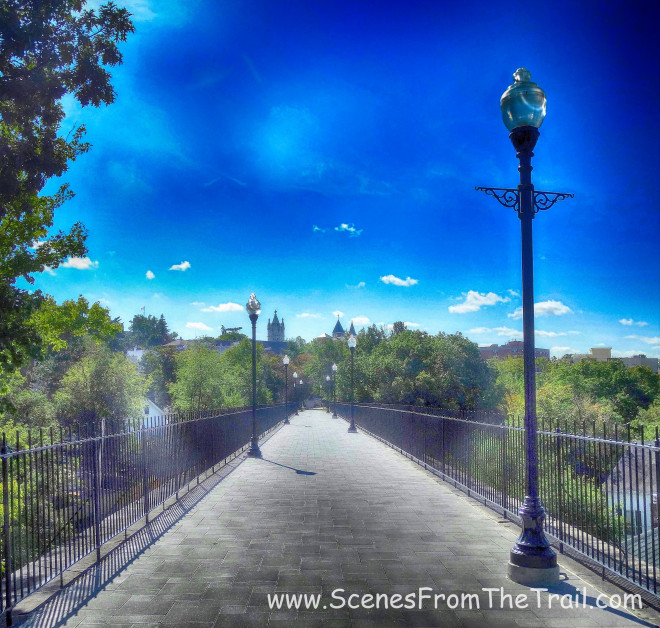 After crossing the bridge, we walked on a paved path bordered by homes and businesses on either side. 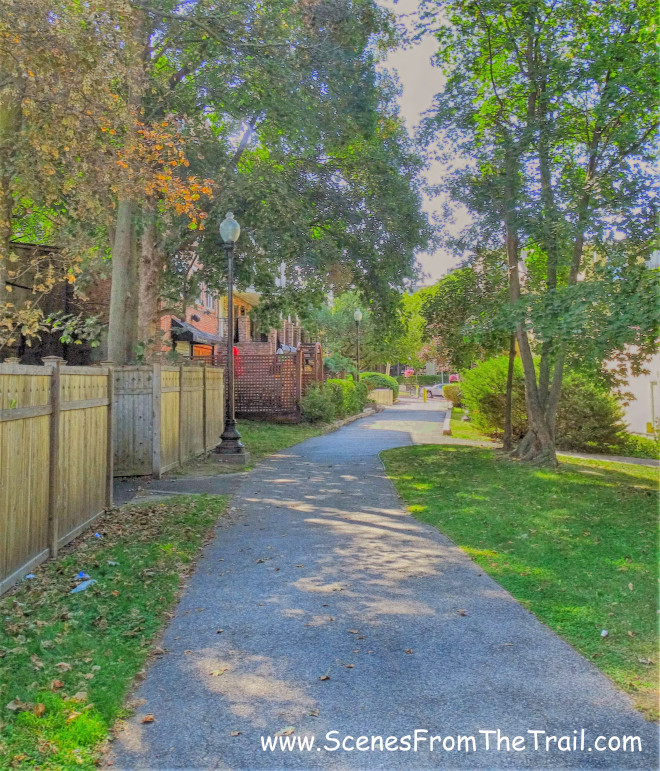 Then we came to Main Street and we crossed over. 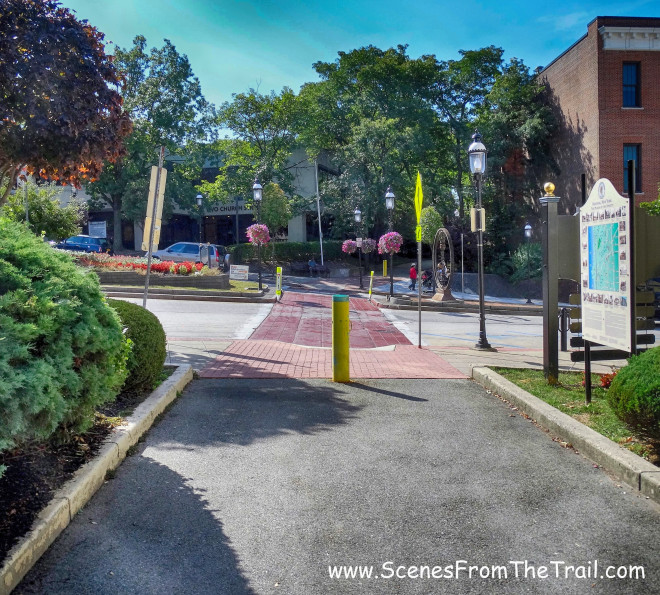 We continued to follow the paved trail that was bordered by buildings……. 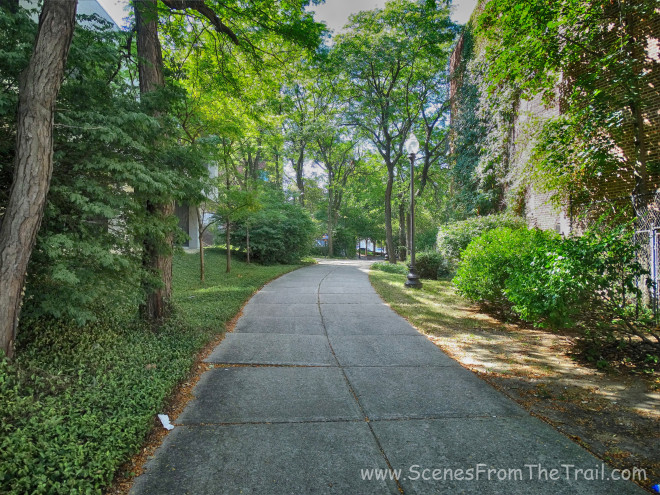 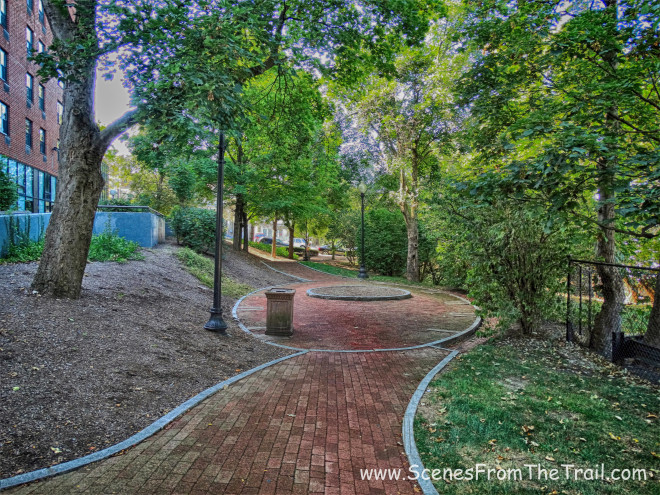 We came out on Maple Place and turned right towards Spring Street, then continued south on Spring Street until we reached Everett Ave. There we saw ventilator shaft number 8. 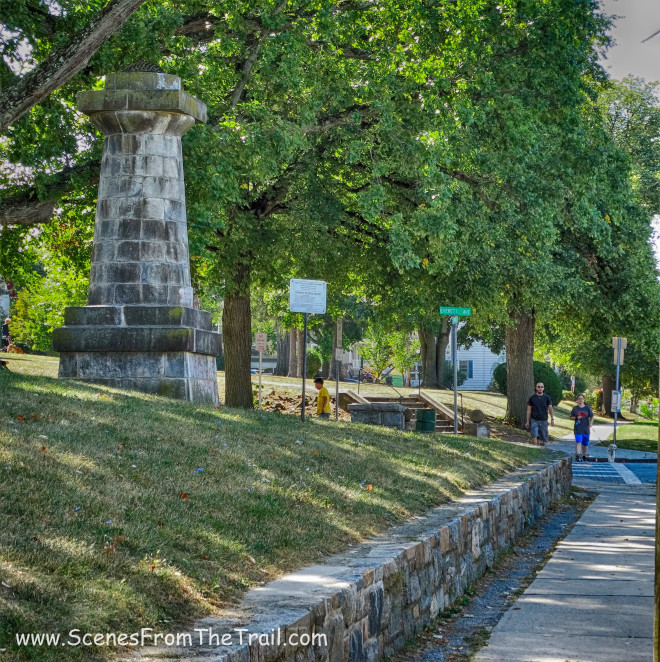 From this point all the ventilator shafts are numbered. I do not know why they didn’t bother to number the ones north of here. This one is also slightly different than the others. 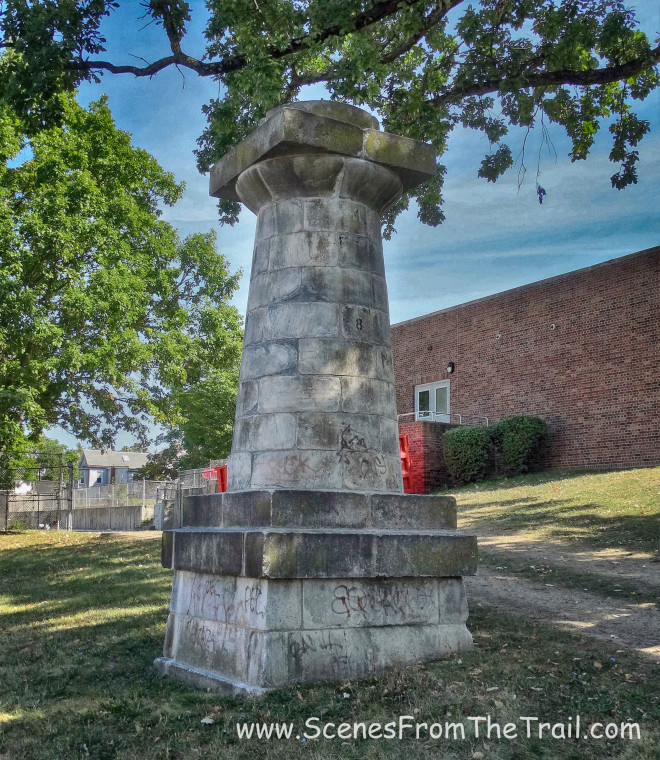 It is more ornate than the others I have seen along the trail and apparently the builder was very proud of his work. He engraved his name into the stone. 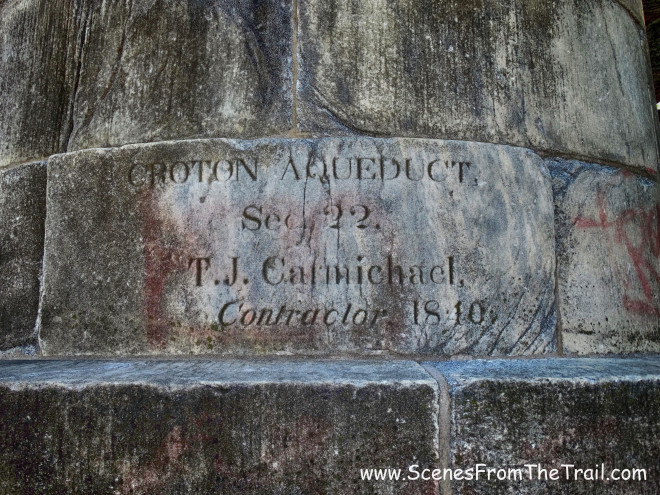 We crossed the street and walked up the stone steps into a park. 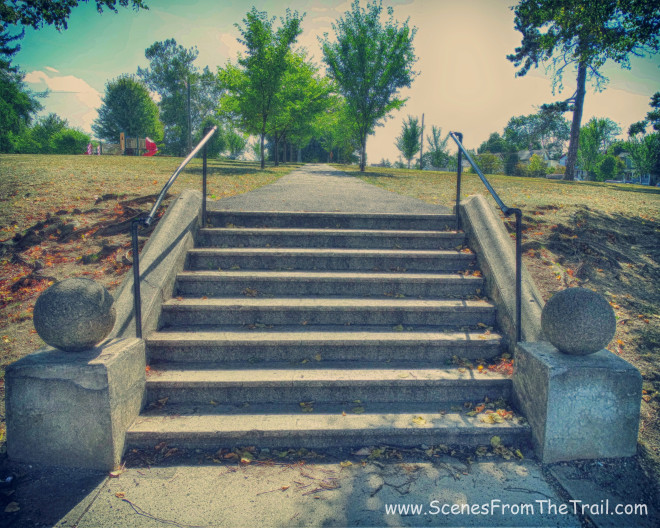 We walked diagonally through the park on a paved path. 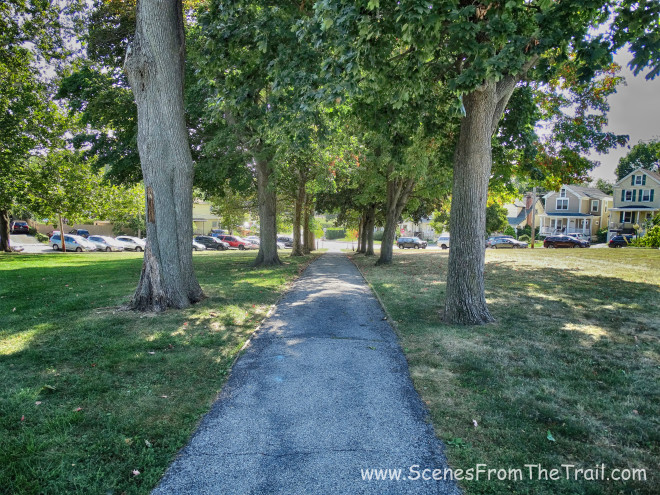 We crossed the street to Nelson Park and walked on the paved path along the northern part of the park. The path veered to the right near Highland Avenue (Route 9) and we walked towards the southern boundary of Nelson Park, where we then crossed Route 9. We followed a footpath into the parking lot of the apartment complex and in the rear of the lot we thrust into the woods. Once again on the aqueduct and off the street. 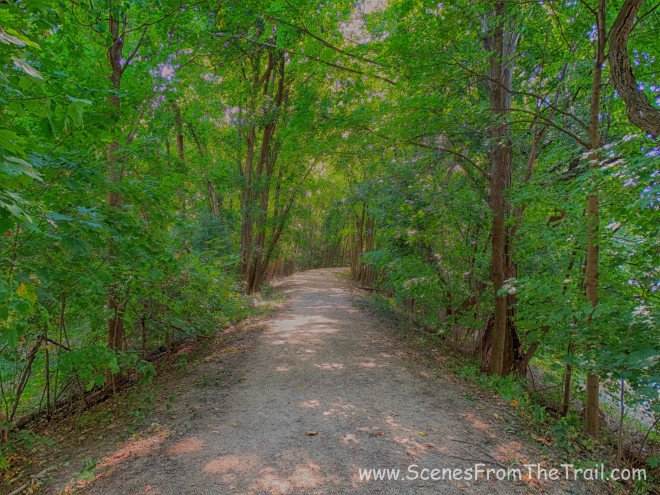 It was a pleasant woods walk with only the sound of a distant lawnmower permeating the landscape. After a short while we came upon ventilator shaft number 9. 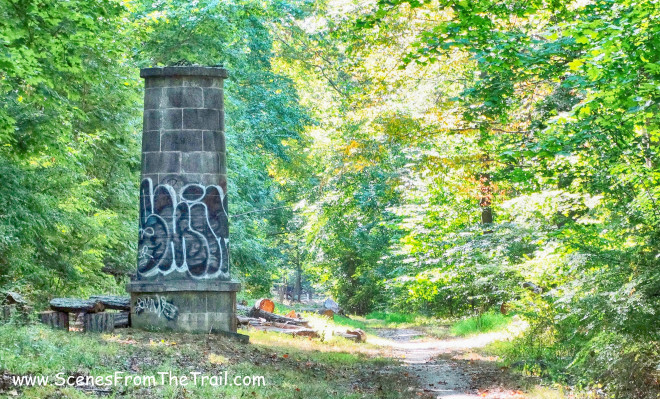 We continued walking along the aqueduct, crossing Scarborough Road and then came out on Long Hill West where we turned right and walked towards Route 9. The trail here diverts away from the aqueduct due to it being on private property. The aqueduct continues on the west side of Route 9, just past the Clear View School (formerly the Scarborough School). The map avoids walking along Route 9 due to the heavy traffic. The suggested route is substantially longer so I took my chances along Route 9. 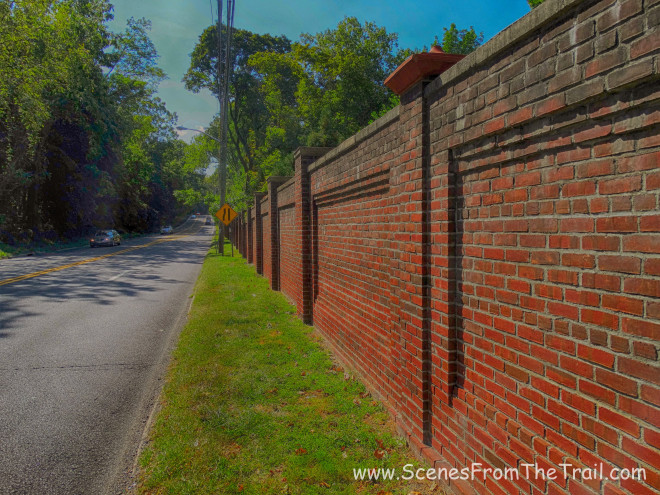 The shoulder is narrow, but it was mowed, so that made it easier to avoid getting hit by a car. I also wanted to capture an image of the gate near the main entrance to the Scarborough School, which I have passed many times by car. It is the former entrance to the Beechwood Estate which was owned by Frank A. Vanderlip. He was president of the National City Bank of New York (now Citibank) from 1909 to 1919, and was Assistant Secretary of the Treasury from 1897 to 1901. Vanderlip is known for his part in founding the Federal Reserve System. 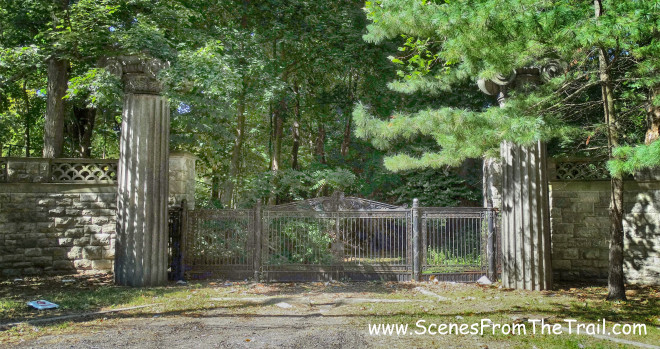 While Vanderlip was vice president of the First National City Bank, he had two columns from the headquarters at 55 Wall Street shipped to Beechwood. He had the columns placed two-thirds above ground in Beechwood’s entranceway. Among the guests the Vanderlips hosted at the house were Woodrow Wilson, Henry Ford, Sarah Bernhardt, Annie Oakley, Franklin D. Roosevelt, John D. Rockefeller, and Isadora Duncan. The Wright Brothers even landed a plane on the property. 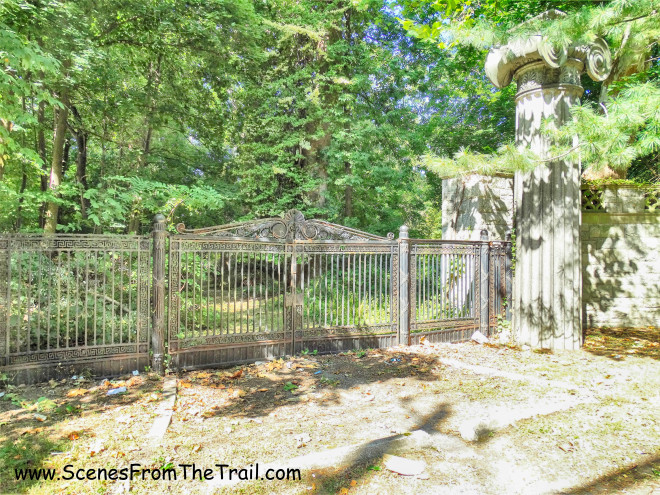 History lesson is over, let’s get back to hiking. Once past the Clear View School, we turned right onto River Road and we caught up with the aqueduct again. It wasn’t long until we reached ventilator shaft 10. 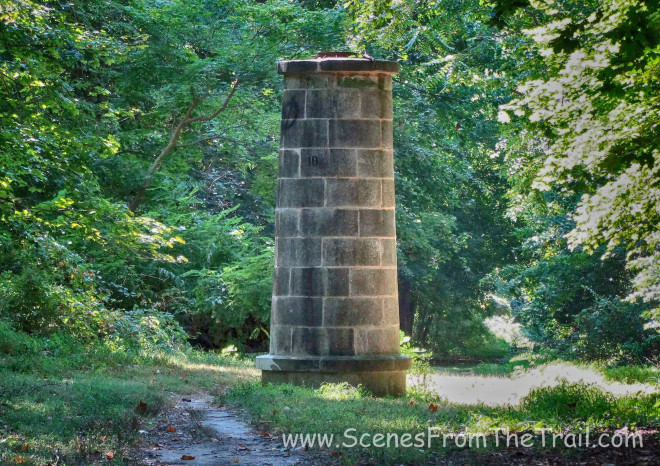 From here the trail was discernible, even with several road crossings. Signage was plentiful and since we were walking on the actual aqueduct, it was easy to follow. We came to a road crossing on Country Club Lane and proceeded past the gate. 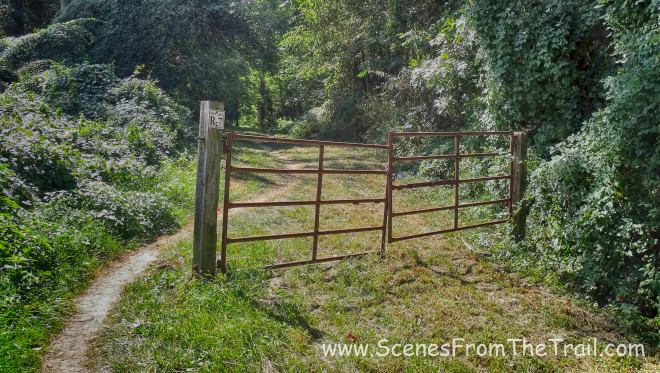 We walked along the aqueduct until we came to a monument on the left side of the trail, just before we crossed Archville Bridge. This monument was moved from its original spot on Route 9 to its present location and the informational plaques added. 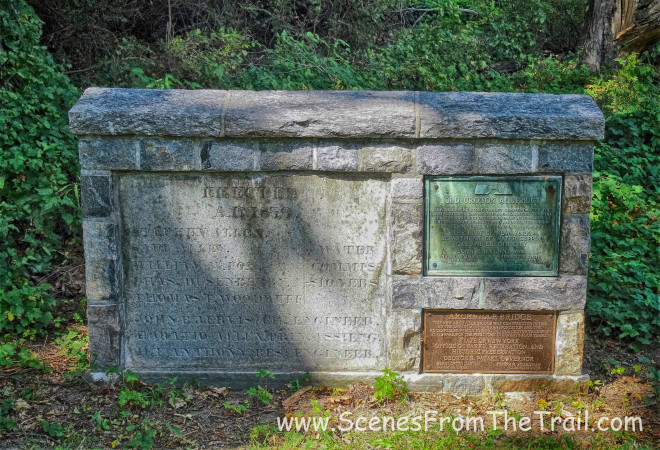 Then we crossed over Route 9 on the Archville Bridge.

This bridge has some interesting design features. Click here for more info. 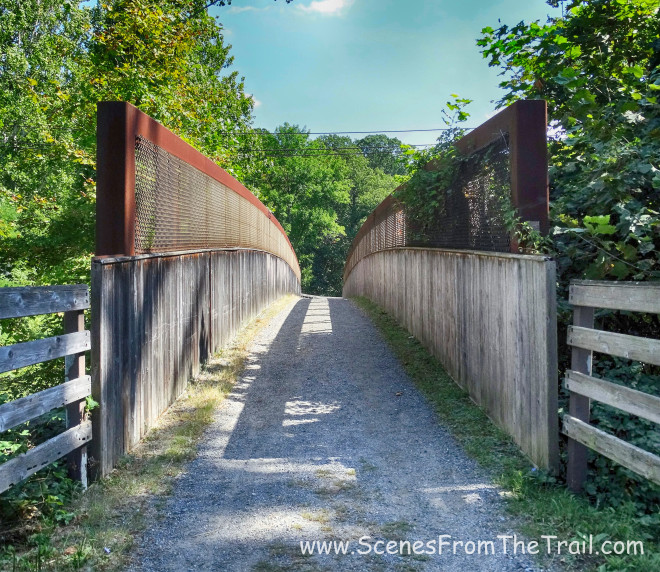 After crossing the bridge, we continued hiking until we reached ventilator shaft 11. 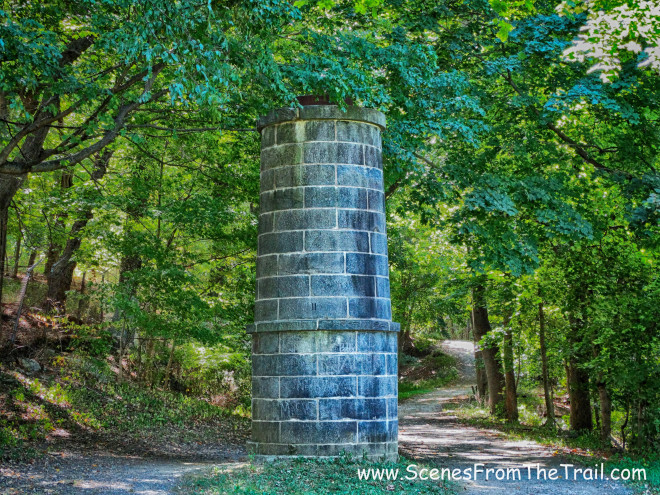 We wanted to take a break here, but there was nowhere to sit. I suggested that we continue until we reached the weir behind the Sleepy Hollow Cemetery because I knew there were some benches made from logs there. So on we trekked, crossing over Route 117. 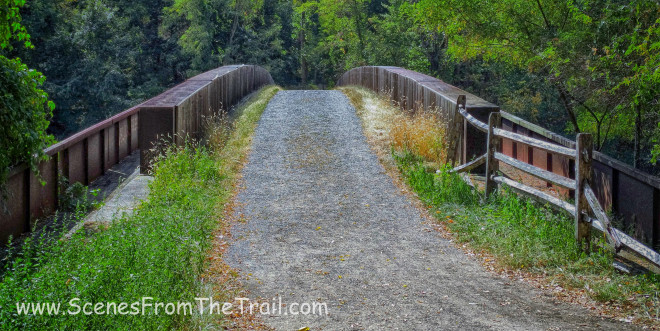 Soon we came to the weir that I mentioned earlier and it was time for lunch. 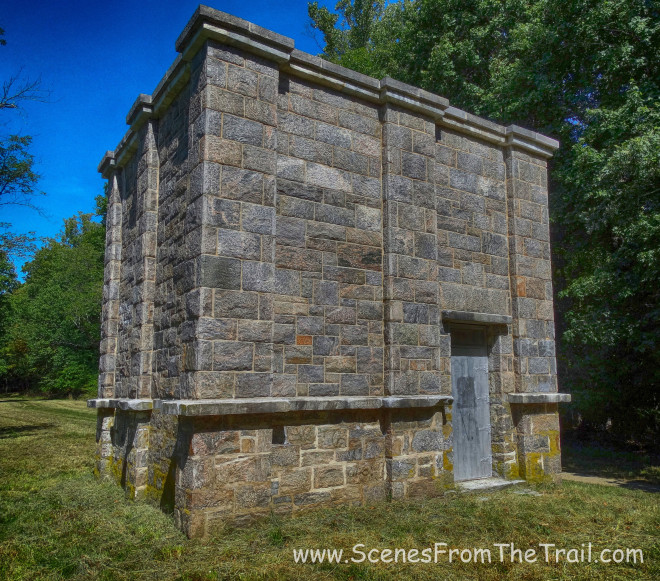 After taking a well deserved break along with having some lunch, we were on the move again. This part of the aqueduct is very familiar to me. I have walked this section since I was a kid. It is also a very picturesque section as well that rises up to 80 feet to span over the Pocantico River. 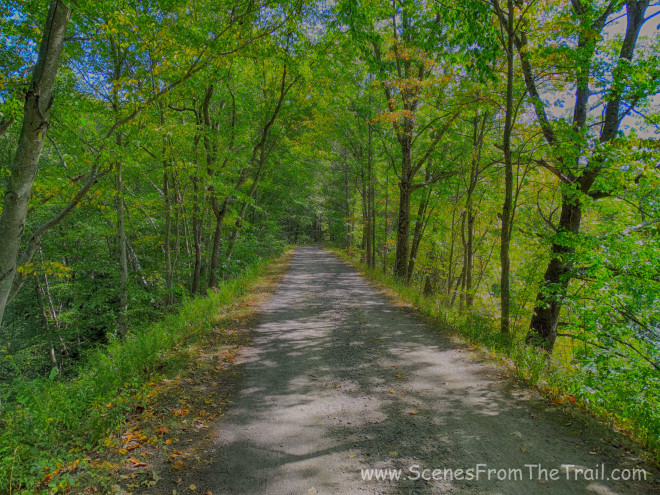 Separated by a stone wall, the aqueduct began to parallel Gory Brook Road, which is very familiar to those that grew up in this area.

When we got to the chain that runs across Gory Brook Road, we ended our hike there. That is where we had parked one of the vehicles earlier. We got in the car and drove back to Ossining where we began the hike, to pick up the other vehicle. I hope you enjoyed part 2 of my 26 mile Old Croton Aqueduct Trail section hike. Until next time folks, keep on trekking…… 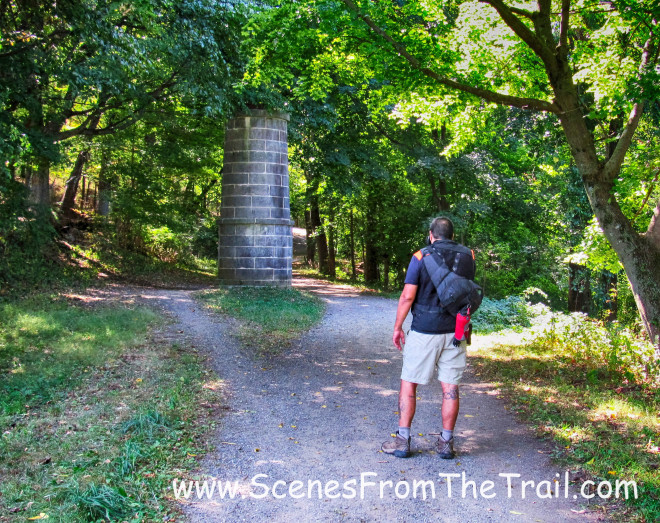 NEXT: Sleepy Hollow to Dobbs Ferry