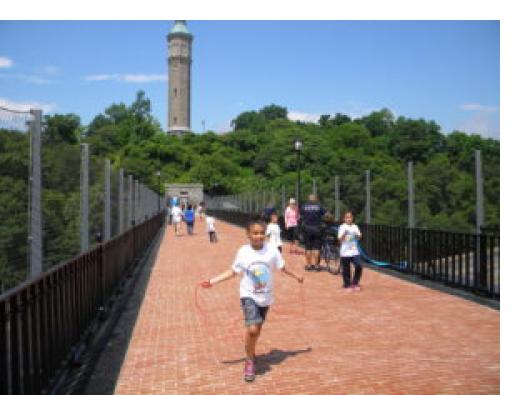 Fall offers us some of New York’s best weather. It is also a fine season to visit the High Bridge, the centerpiece of the original (“Old”) Croton Aqueduct, completed in 1848 and today the city’s oldest bridge. The High Bridge carried pure, plentiful Croton River water — the beginning of the city’s world-famed water supply — from the mainland, across the Harlem River, to Manhattan Island at a time when New York City existed only at the south tip of the island. The water pipes are still there, beneath the bridge’s deck where visitors stroll.

Connecting the Bronx’s Highbridge neighborhood and Washington Heights in Manhattan, the bridge’s spacious, quarter-mile-long walkway has never had traffic on it and never will. Long a popular destination for outings, the bridge was closed to the public in about 1970 and remained so for decades. A mainly city-financed restoration included making it fully accessible, cleaning its multi-hued stonework for the first time ever, and revealing its masterful engineering. On June 9, 2015, New York City Parks Commissioner Mitchell Silver presided over joyous re-opening ceremonies marking the bridge’s return to public access.

The High Bridge is not new to public attention. This evocative quote appeared in Scribner’s Monthly for 1877 (vol. 14):

“Every resident of the city knows where High Bridge is, no matter how dense his ignorance may be as to other points of the water-service.”

Indeed, the world flocked to the bridge. In its earliest days, Edgar Allan Poe, at the time living in the nearby village of Fordham, is said to have paced its deck. Later, artists and photographers made countless images both of it and from it. Throngs of tourists came by excursion boat to promenade on its walkway, while beer gardens and restaurants sprang up to fuel the visitors. The combination of its 15 imposing Roman-styled granite arches, combined with then state-of-the-art engineering, inspired near-universal admiration.

Few know that the Harlem River once had its own “dancing waters.” The Croton Aqueduct started bringing water to Manhattan in 1842; the High Bridge wasn’t completed for another six years. In the intervening years, Croton water crossed the Harlem River through a temporary 36-inch, low-level pipe. The water descended on the mainland side and then ascended on the Manhattan side through an inverted siphon 120 feet deep. The pressurized water, gravity-powered, could be released as a jet, or fountain, upstream from the bridge. The engineers occasionally “played” the waters of the jet, which sometimes reached 115 feet into the air, to the delight of High Bridge tourists.

And yet, in the 1920s, the bridge came close to being demolished by the city under pressure from the War Department, which considered it a navigational hazard. Strenuous opposition from the public, architects, and engineers led to what The New York Times in 1928 called “a triumphant compromise between art and utility. . .”: replacement of the five beautiful 80-foot-wide arches in the river by a single steel span.

What better way to escape pandemic-induced claustrophobia than to visit the High Bridge, learn its remarkable history from the beautifully designed bronze medallions set in the deck, and enjoy its airy views. The bridge, administered by the New York City Parks Department, is open daily; hours change seasonally. Call 311 or, from outside New York City, 212-NEW YORK. (For directions, see the Friends’ website at https://aqueduct.org/high-bridge.)