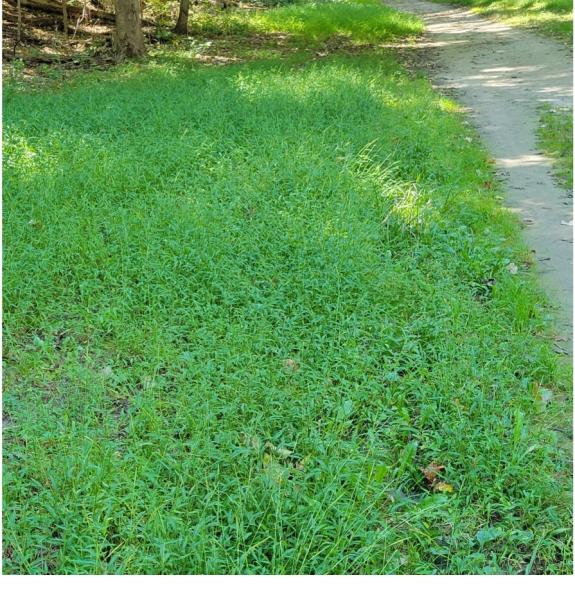 The problem: Stilt grass is ubiquitous on the Aqueduct trail and in mid-September is currently flowering and will shortly start to set the seeds which will widely disperse onto the trail.

Looks nice and green, but it is extremely detrimental to the ecology. It alters the natural soil chemistry and, as it increases, it crowds out native plants and severely reduces plant diversity. Hand pulling has been found to be the most effective for relatively small populations. It should not be pulled before July, but should be pulled before the seeds set in early fall. I organized an emergency pop-up removal of stilt grass in a section of the Aqueduct Trail we have been tending since 2012. Two enthusiastic previous I Love My Park Day participants responded to the emergency call; they worked with me for an entire productive morning on September 12, 2021 and were very satisfied with the results. Here is Leigh surveying a section on which she had just started to work trailside: 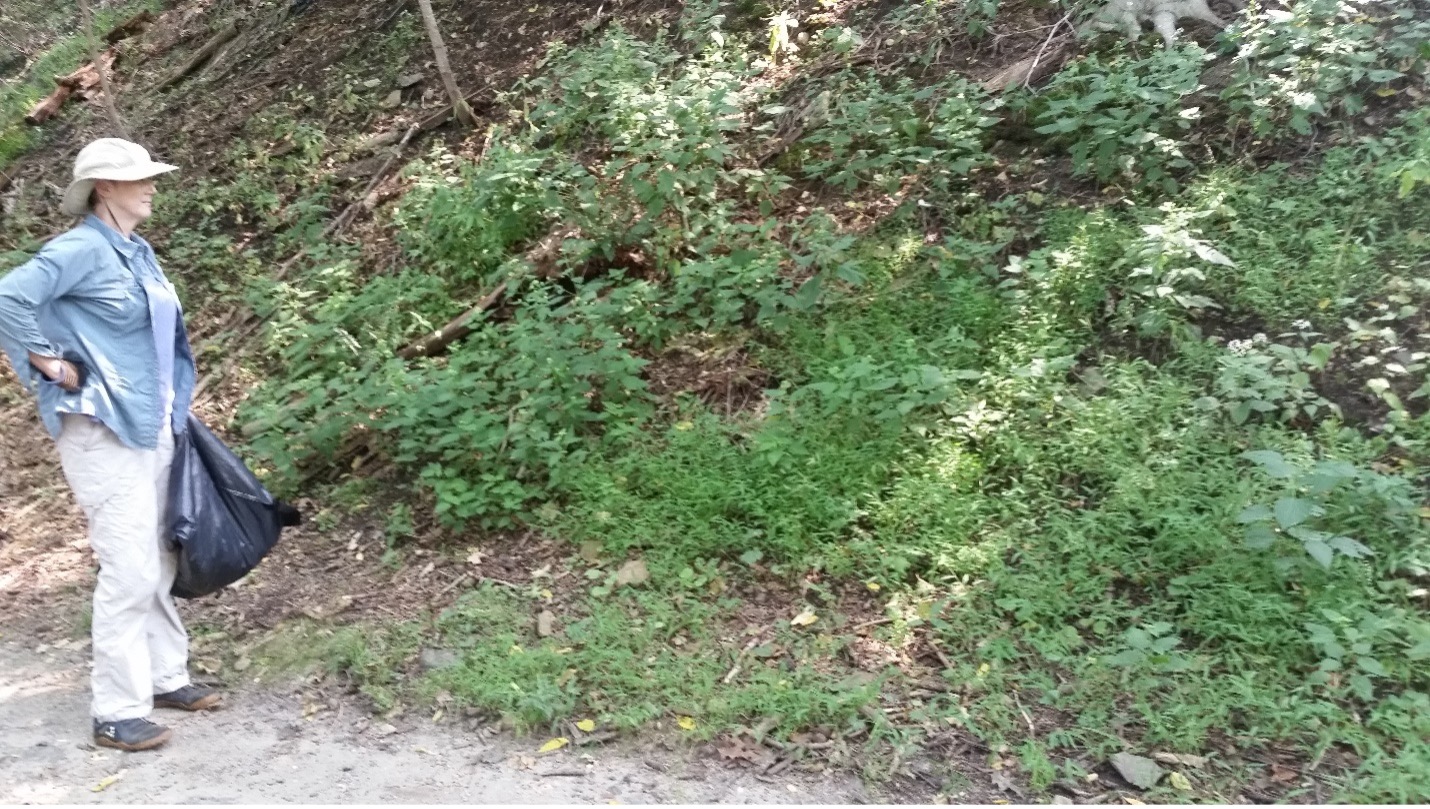 Here is Alice, pleased with the results of her work. She advised that it would be important to clear the top of the hillside so that the grass would not spread down the hill, and then followed her own advice. 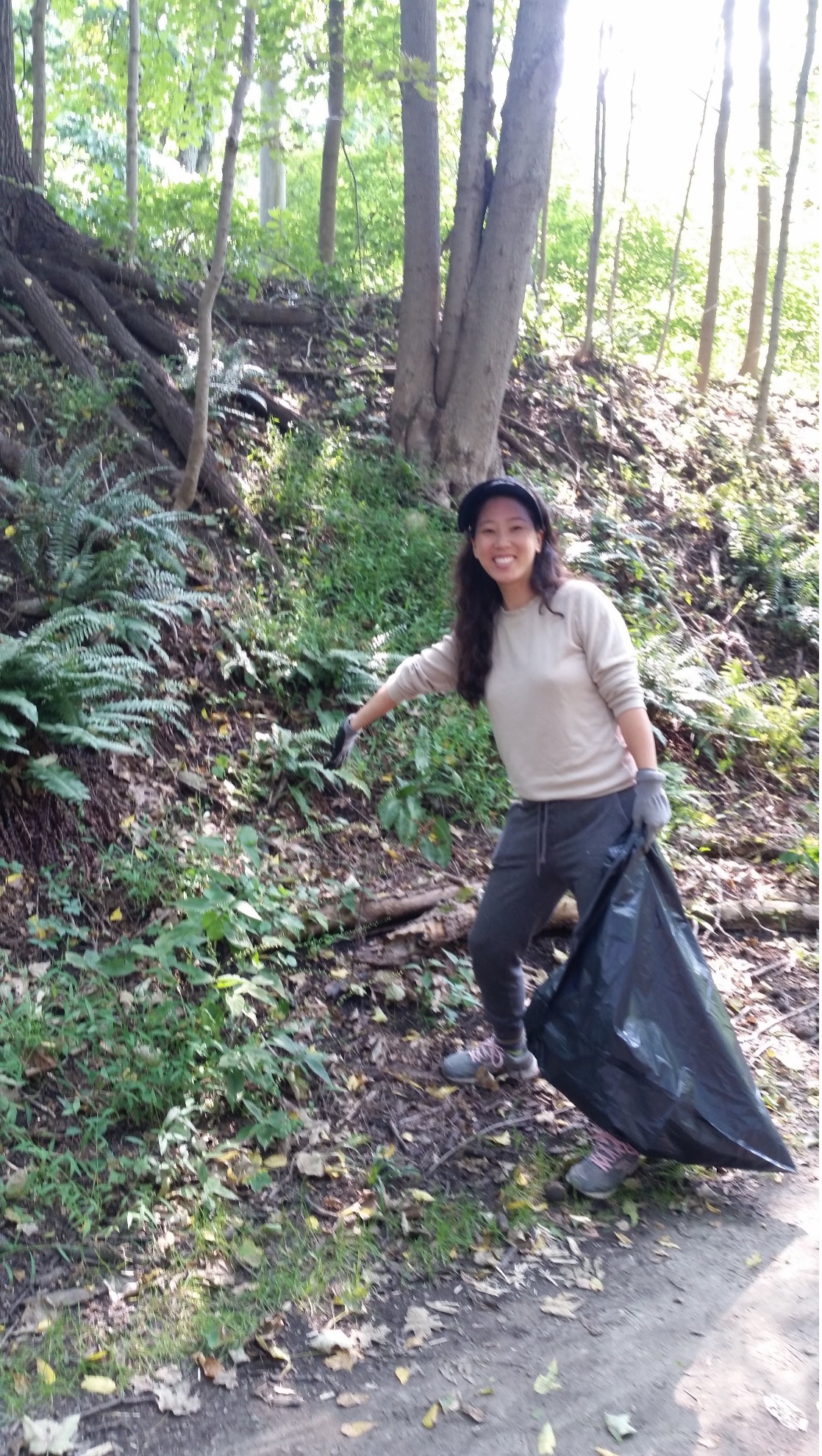 Alice worked both trailside and above the trail where she found this unusual caterpillar. It was rolled up in a leaf of Hog-peanut (see below for a photograph). Hog-peanut, (Amphicarpaea bracteate) is a native plant that has started to flourish on the trail now that we have been removing invasive species. After photographing this caterpillar, she put it back where she found it. This is an example of the benefits of removing invasive species. We hope this caterpillar survives to emerge as a beautiful Silver spotted skipper butterfly, Epargyreus clarus. 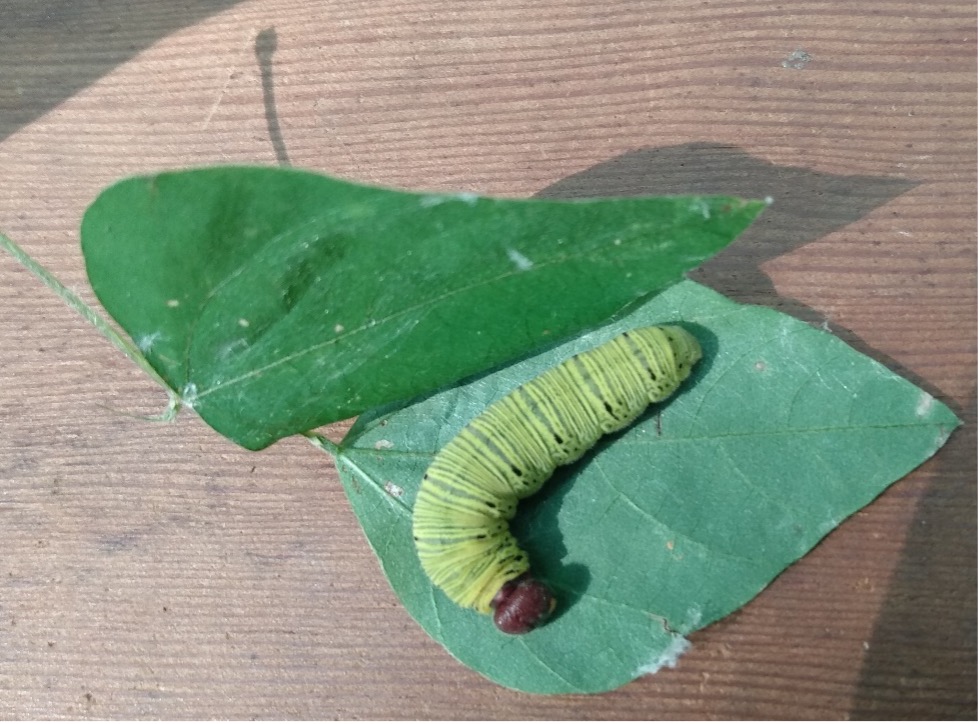 American Hog-peanut, Amphicarpaea bracteate. This plant is a member of the legume family; members of this family add nitrogen to the soil, thus improving it and helping to nourish other plants. The day Leigh, Alice, and yours-truly worked together, we weighed the bags and ascertained that we had removed 29.4 lbs. We put the bags in the wheelbarrow and along came a local trail walker and offered to take on the job of transporting the bags for disposal. I call that trail magic! 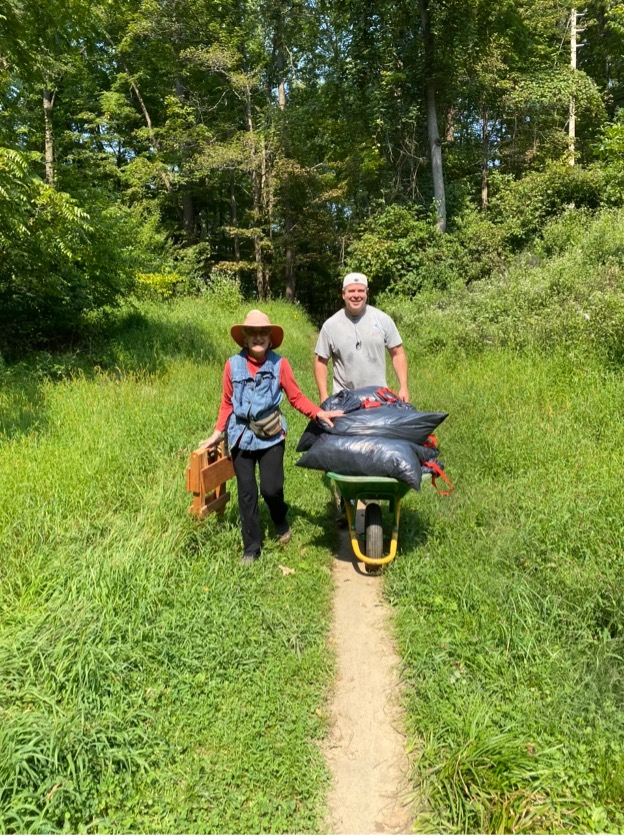 I wanted to keep going with this project and Lily offered to return and I recruited Mary, who walks many miles every day on the trail with her dog. She is camera-shy so I cannot show you a photo of her. She, with her dog tethered to her belt, Lily and I worked together for several hours on September 13. Here is Lily weighing the bags we filled with a total of 54.2 pounds. 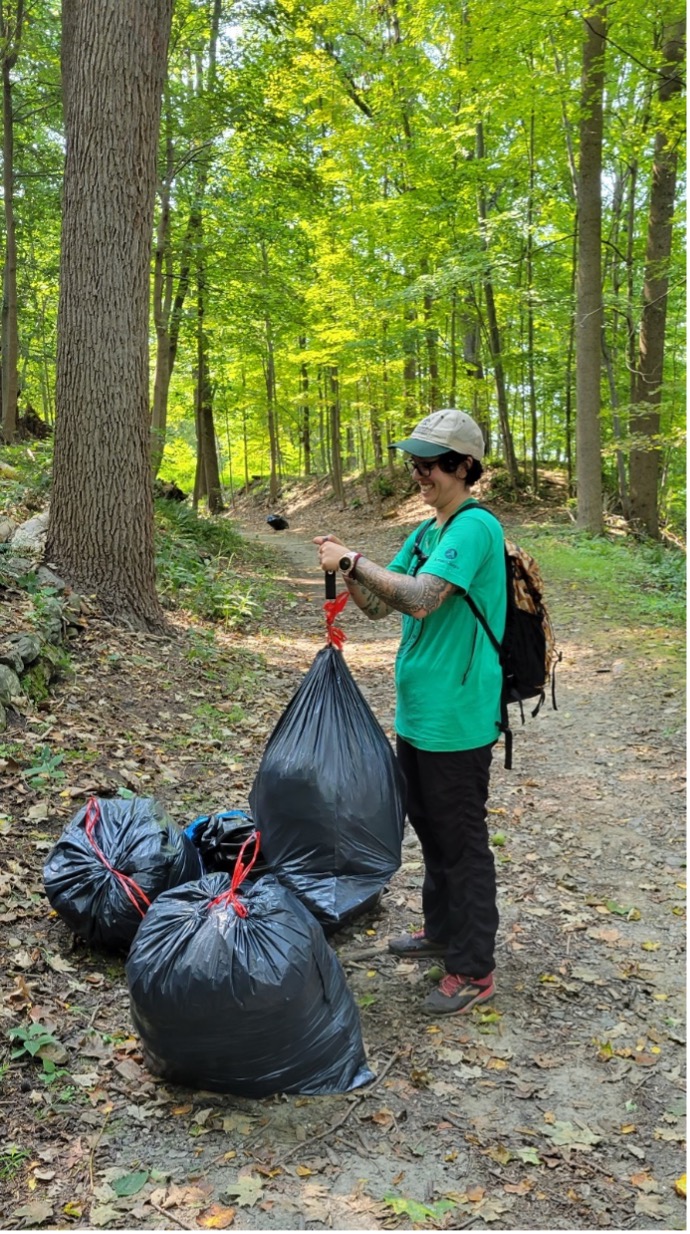 Lily is an Ameri-corps New York New Jersey Trail Steward who works with other stewards along the OCA and the DEC Unique Area, providing education and information to the visitors on weekends and holidays. I recruited Lily and then she inspired her fellow stewards to continue the stilt grass removal effort. 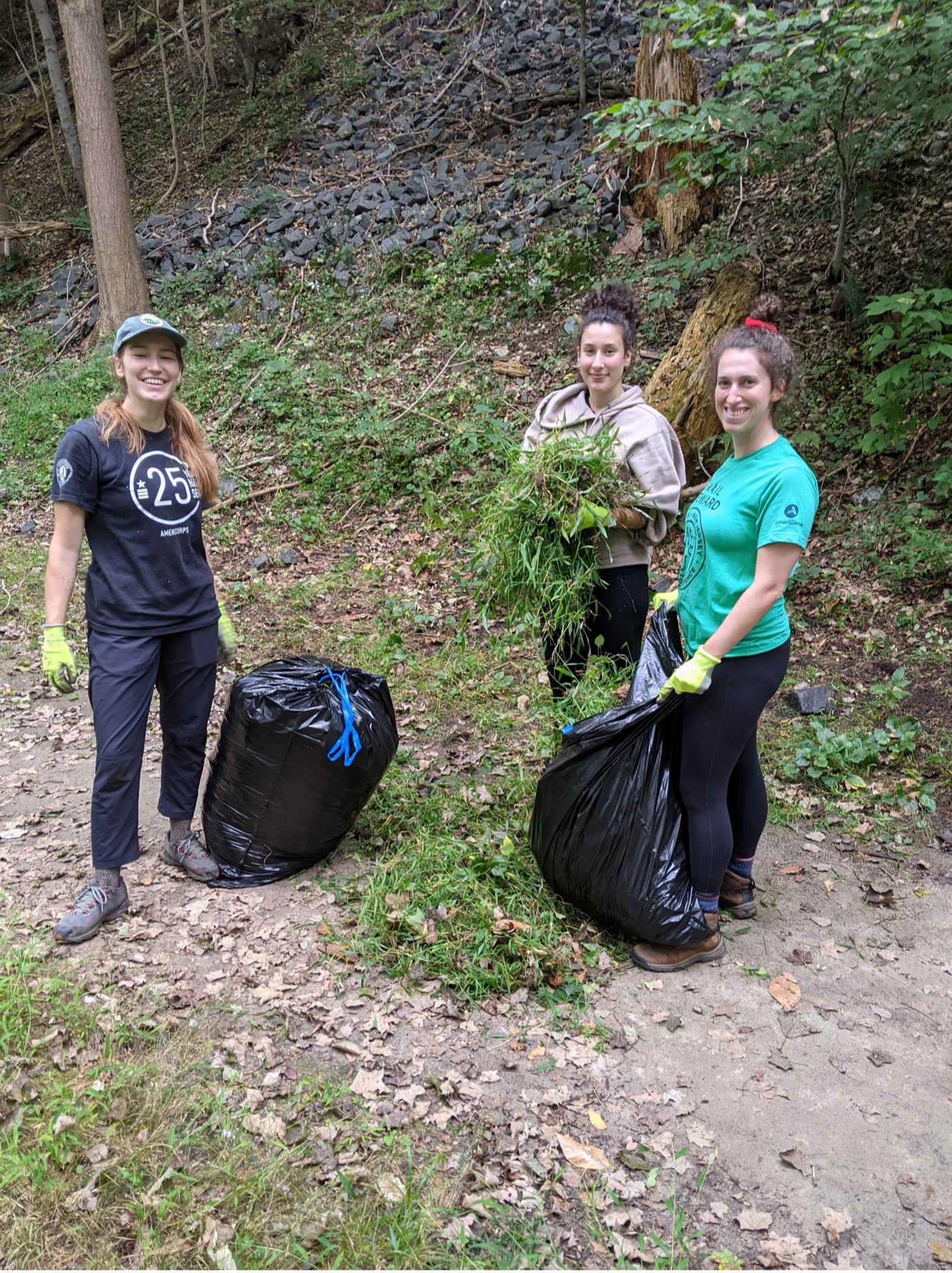 The four Stewards worked from 9 am to 3pm on September 17 and removed 247.07 pounds. They volunteered to remove stilt grass on the OCA instead of doing trail maintenance in another park. A huge thank you to Lani, Rosa and Jen, pictured here in a photo taken by the leader of this group, Lily!

They had fun making a time lapse video to demonstrate their work: https://drive.google.com/file/d/1J191KpLuIdop_ScJlJbTLQZeY9UIP1Oi/view 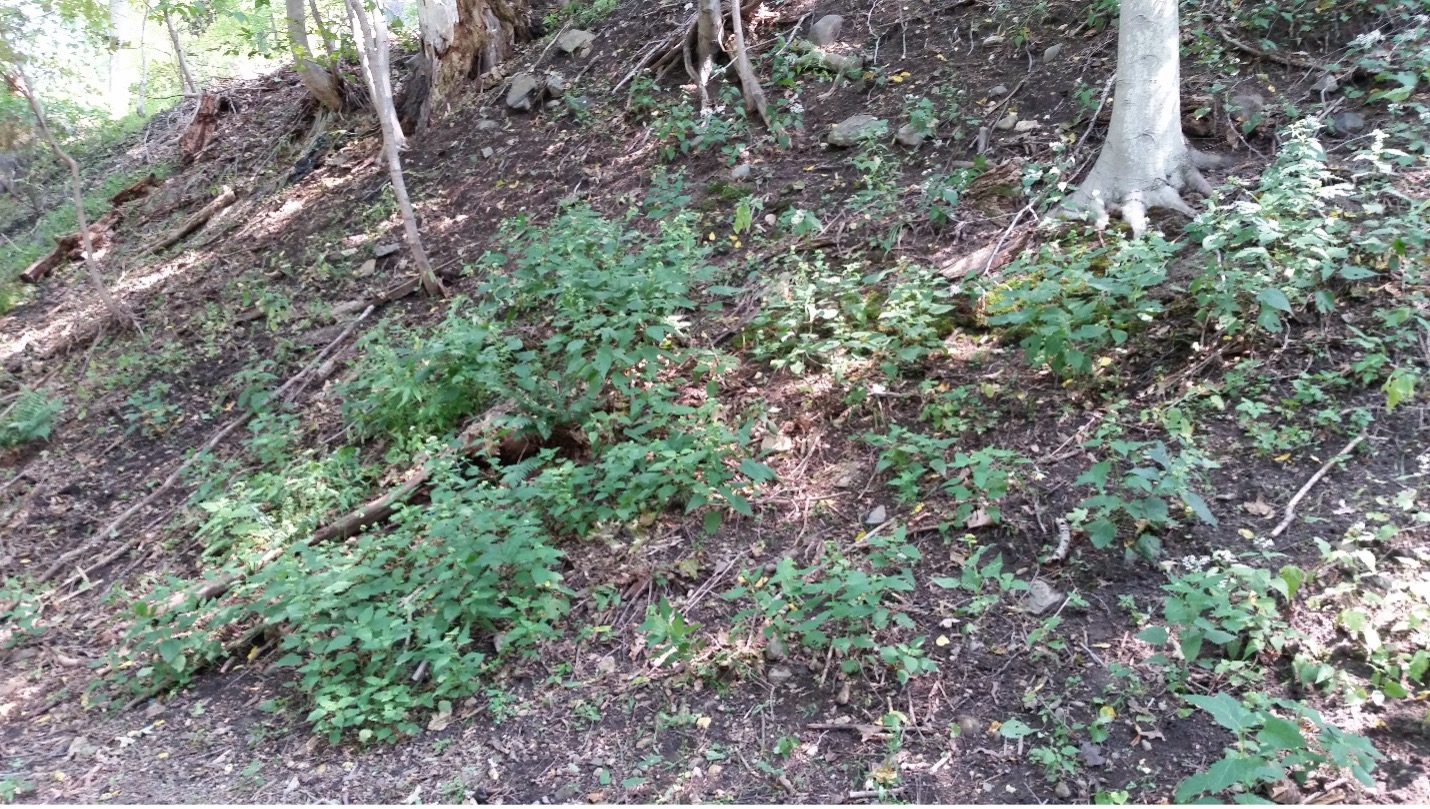 Here is a photo of one section of the hillside, free of stilt grass, with native plants that now have the room to thrive.

Lily also made a video on the last day of this endeavor to show the results of their work. https://drive.google.com/file/d/1Iv7mX5e0tZW-5rG_AMiPiZKi-P3go6DU/view

I may recruit others to work on the trail edges and hillside in the coming days of the section in Cortlandt that I have adopted, since the grasses have not yet set their seeds. I would encourage other ambitious trail lovers, if they have the time and energy, to select a small section of the trail right now and remove the stilt grass and then watch next year to see what native plants may emerge.

Stilt grass removal is an especially enjoyable activity for children! 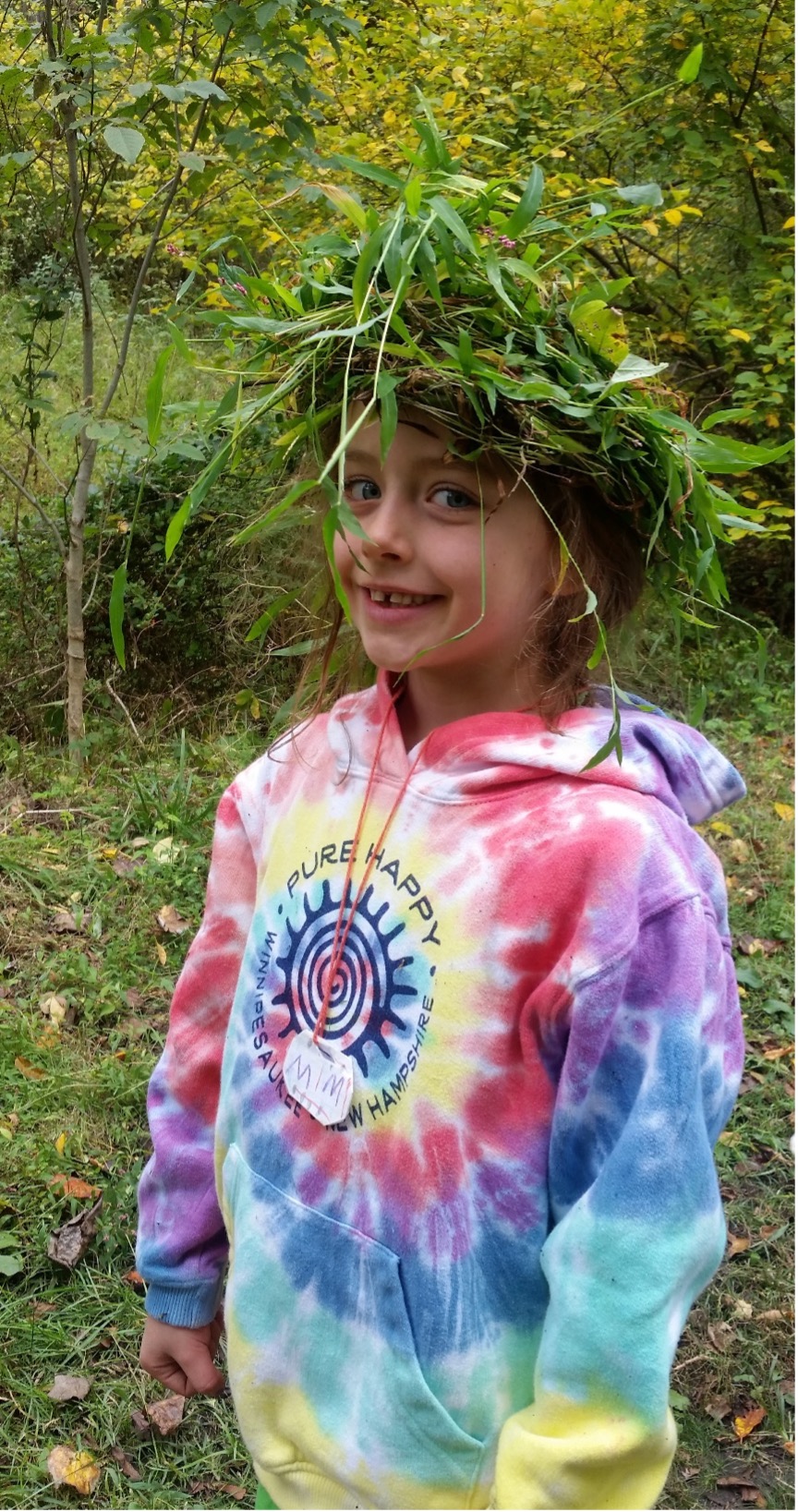 Local property owners may want to do some stilt grass removal on their own properties. See here for more information about stilt grass: https://www.lhprism.org/species/microstegium-vimineum

In the meantime, the Parks crew members are in the process of mowing the trail edges, perfect timing, since doing so now will set the plants back considerably and help keep them in check.