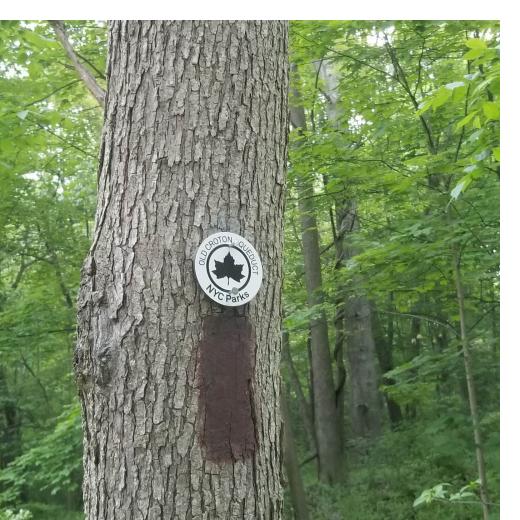 For years the Old Croton Aqueduct Trail has been on my list of long runs that eventually I wanted to complete while living in New York. The first step, the desire to run the trail, was there, however it took a little while for the planning to catch up.

At first I started by running in Van Cortlandt following the signs up to 233rd St and Jerome Ave. Little did I know that while I was running the the John Muir Trail, exploring the East section of the park, I would pass over a dirt trail that cuts back to the paved section of the Old Croton Aqueduct Trail. Either the white "NYC Parks, Old Croton Aqueduct" trail markers hadn't been put up on the trees yet or I did not notice them at the time. I would always stay on the north and south paved branches (thankfully not brushing through any Poison Ivy or Oak during the summer months in between the Parks Dept. Trail maintenance) in the park until I saw some routes of other runners that I follow on Strava running through Yonkers and other parts of Westchester County on the OCA. I decided I had to dig deeper, map it out and run it.

Digging deeper led me to the Friends of the Old Croton Aqueduct website and blog. Reading a lot more about it really motivated and pushed me to experience running the trail myself. I started looking into other maps and understanding where it mostly ran.

Running the trail took me a total of 5 tries, each starting more north than the previous run. Starting points were Van Cortlandt Park twice, Hastings-on-Hudson, Sleepy Hollow, and Ossining. After all of these tries, I ended up deciding to run the entire trail on one go, the New Croton Dam back to Van Cortlandt Park.

A little back story, I registered for my first Ultramarathon back in February of this year, the Cayuga Trails 50K in Ithaca, NY. It's original date was May 30, but as the COVID pandemic swept in it was ultimately postponed until July 18.

At the beginning of July the race was still scheduled to go on, because Ithaca's Finger Lakes Region, along with the rest of the state outside of NYC, Long Island and Mid-Hudson (Westchester, Putnam, Dutchess, Rockland Counties etc.) Regions had a sharply declining amount of COVID infections and have already progressed into reopening phases. The race director provided all of the Pandemic procedures and precautions for the race, such as no spectators, all volunteers and runners having temperature checks when showing up to the course, what runners must carry with them (a mask, hand sanitizer, personal water and food, etc.). Being that I live and work in NYC, I didn't want to risk being an asymptomatic COVID carrier and risk infecting other runners/volunteers or vice versa, so I deferred my registration to 2021. I had been training for this race so I was focused on finding a route to run my own 50K and what better place to do that than the OCA Trail. The Westchester portion would cover 26 of the 31.1 miles I had to run so I mapped out a course to cover the length of that race distance.

I went out the morning of July 29, taking the first Metro North train to Croton Harmon and starting my first ever, self-supported 50K from there (the longest runs I have ever done previous to this has been the marathon, 26.2 miles) . I roughly followed the Croton-on-Hudson Trail Link to the OCA and ran up to the New Croton Dam, turned around and started the OCA segment there. 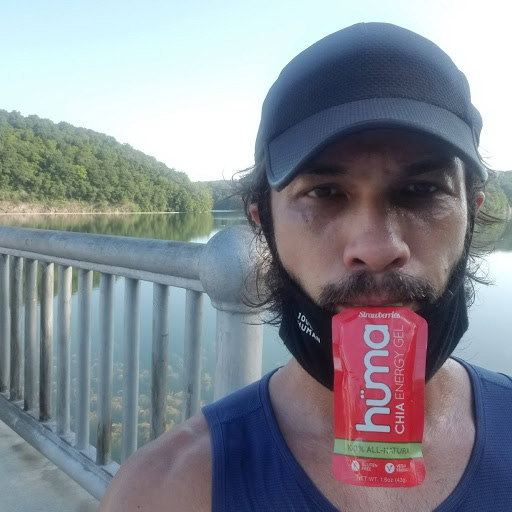 The great thing about most of the trail is that it is covered in this tree canopy that mostly shields from the sun. This helped out a lot in the early stages, as I was running in mostly shade. That would eventually change the longer I was going and the further south I traveled as the sun rose higher in the sky.

The first 10 miles of this race I was feeling good. I focused on conserving my energy for the later stages, and I remained optimistic. I was able to get through the road detours in Crotonville & Ossining. Many thanks to the Friends of the OCA, for their signs and maps along the detours and at road crossings to help direct to where the trail continues! Without those, it would be a whole different adventure finding the next part, especially in Briarcliff Manor, Ossining, and Crotonville. 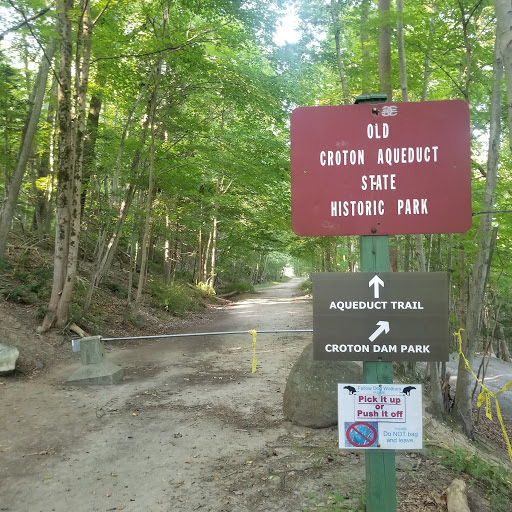 The second 10 miles were tougher, the heat and humidity were up, so I had to stay focused. I brought three 22oz bottles of ice water with me as well as 5-6 gels but by the time I reached Tarrytown (around mile 16 of the race), I was almost out of water. I made a pit stop at the CVS (my air conditioned aid station) in the shopping center where the detour over I-287 starts. I reupped my water supply, chugged a Gatorade and got back to it.

At mile 20 I was in Ardsley, making my way into Dobbs Ferry. I had begun taking a bunch of walk breaks that would end up being my method of finishing the 50K. Run, walk, run, walk; the summer weather made this run very difficult.

In the third 10 mile segment, I came across the section of the trail I had not run yet in Hastings, below Washington Ave. It was actually in this section where I tripped over a tree root and wrecked on the trail. Luckily it was a dirt segment, with no asphalt, stones or gravel. No blood, just a lot of dirt. I landed on my right side and laid there for a moment. A fellow runner heading north asked me if I was ok. I let him know I was and thanked him. I stood up and brushed myself off and got back to it. I wasn't in Yonkers yet and I wasn't going to get to 31.1 miles until I was in Van Cortlandt Park, so I started moving. Run, walk, run, walk. I had to keep it going.

One thing I knew already but was made abundantly clear during this run is that Yonkers is huge! Starting at the New Croton Dam, I was flying through towns and villages all the way south until I started run/walking. But even then, I would pass through towns and villages quickly. After entering Yonkers, you stay in Yonkers. I worked my way down the trail to the Broadway & Ashburton detour to the crosstown trail segment over to Yonkers Ave. I was mostly walking at this point, with the sun having it's way with me, being mostly out of the shade and in it's direct rays. It felt like I was in an oven. It was mid-summer, so I accepted it and kept moving. I made my way slowly to Tibbetts Brook Park, into some semi-shaded parts of the trail. I tried a little running here and there, but mostly walked. Throughout the Yonkers segment, the negative thoughts kept showing up. "You should quit", "Why can't you run?", "Why are you doing this?".  I have had similar thoughts during the Marathon, so I wasn't surprised. When you push yourself to go above and beyond, your mind will try to get you to stop. I let the thoughts show up and pass. This wasn't easy, as it never is. I weighed options and thought about what I would do if I quit. I would catch myself and give myself a mental slap in the face and do my best to refocus. This would be my thought cycle until I finished. Self-doubt, weighing options, mentally slapping myself, and refocusing. Do I have the mental strength and guts to attain my goal? Do I? Over and over again. This was a really good exercise in mental strength.

When I reached the final home stretch of the Yonkers section and I could see the wooden gate where Van Cortlandt Park starts, I ran. I ran back into NYC and then I slowed back to a walk. I was close to mile 30 at the time, so I still needed to push to the total 31.1 miles (50K). The Van Cortlandt Park section of the dirt trail is completely shaded, so that helped me out on the final leg of my Time Trial Race. I still mostly walked, with a few quick run sections . I had to take the dirt trail back to the paved section, along Mosholu Expwy and up the hill to the bridge along the Major Deegan Expwy (I-87) and down the ramp towards the golf course, where I finally crossed the 31.1 mile (50K) mark. I did it! I felt happy, yet tired, zapped by the sun and thirsty.

I walked to the benches at Van Cortlandt Park South/Gun Hill Rd and sat for a moment, to absorb the moment and take a look at my run after my Garmin synced. I ran my first Ultra! I learned a lot and I know what to do to make my next 50K go a lot smoother and efficient. I ended up walking all the way to Bedford Park Blvd and the Grand Concourse (after stopping at a corner store for more water, Gatorade, and a can of Coke. I don't drink soda, but I crave it in the summer months during my long runs. I always crave a soda and a burger, and then a beer lol) so I could catch the next D train home. 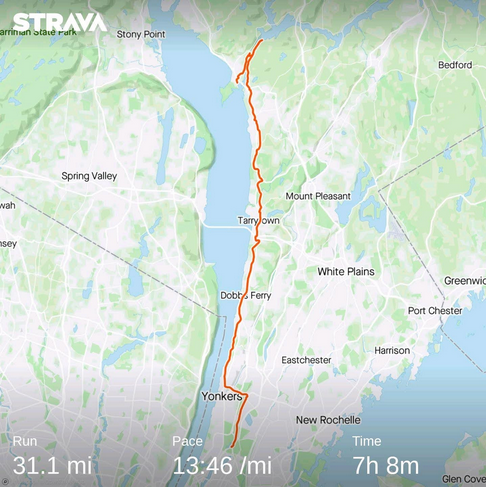