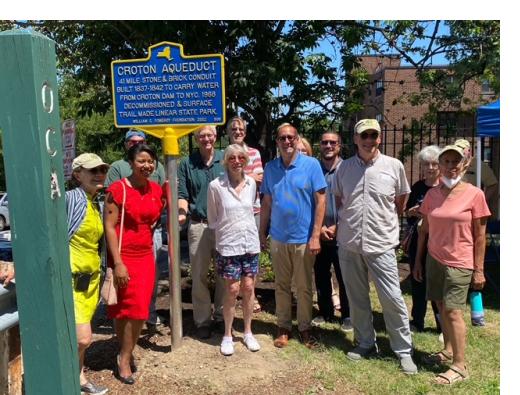 The Yonkers marker was officially dedicated on July 23, by City Councilwoman Corazon Pineda-Isaac, along with Yonkers Parks Commissioner Steve Sansone. It stands at the intersection of Walnut Street and the Old Croton Trailway State Park, at a well-used section of trail. The marker notes the underground 1842 Croton Aqueduct waterway that first brought fresh water to NYC.

The markers are funded by a grant from the William G. Pomeroy Foundation to The Friends of The Old Croton Aqueduct. Similar blue and yellow cast iron markers are well known throughout NY State for educating the public, lifting local economies and as points of community pride. The markers also attract historic tourism, and the trail is generally within walking distance of a train station along its 26 miles.

Other signs will soon go up, with different information, in Ossining and Dobbs Ferry. The second marker will be installed at the Keeper’s House in Dobbs Ferry, while the third marker will be located at the site of the Double Arch in Ossining, a unique bridge-within-a-bridge where the 1842 Old Croton Aqueduct bridge and the 1862 Broadway Bridge span the Sing Sing Kill. Make plans to see them all!

Docent Lloyd Trufelman from Chappaqua first pointed out something was missing along the trail! In fact, his research on aqueduct history convinced The Pomeroy Foundation to fund markers for three different sites! The Friends extends great thanks to Lloyd for his foresight and hard work.