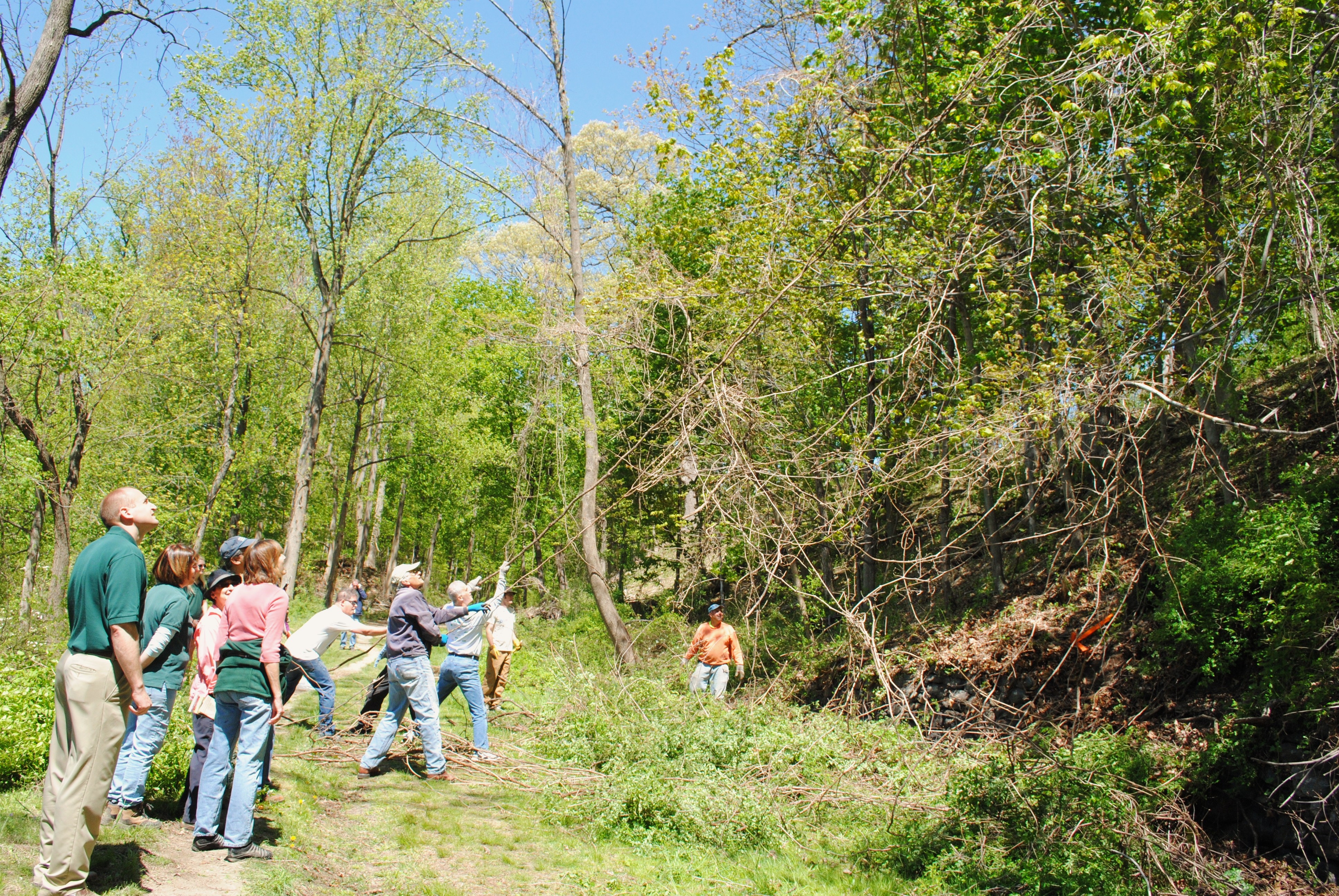 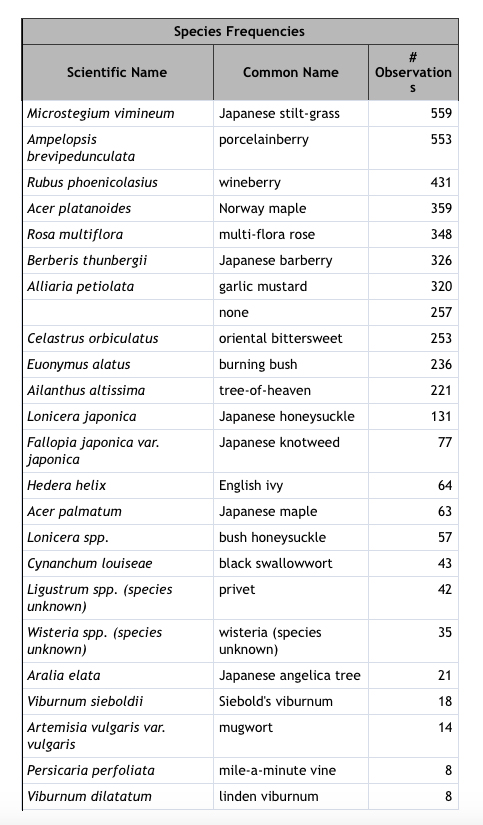 The NY-NJ Trail Conference staff and volunteers are producing section by section maps, documenting the location of each species listed above as well as their abundance. Since 10 sections and 24 species were documented, there will be a total of 240 maps. We plan to make the maps available on the Friends’ website so that users will be able to search by section to see which plants were found in that part of the trail and how abundant they were. The sample maps shown below document the extent of the porcelainberry vine and mile-a-minute vine in selected sections of the trail. (The numbering of the maps goes from north to south.) The porcelainberry vine, shown below, was the second most frequent species found.

The Phase 2 part of the study included the mile-a-minute vine, shown below. Interestingly enough, the mile-a-minute vine was one of the least frequent species documented; it was found in just a few sections during the Phase 2 survey period in 2015. It is considered an emerging species and, if left to its own devices, can take over entire hillsides. Since it was found in only a few sites, this plant would be an excellent species to target for eradication since there is a good chance we could keep it from spreading. 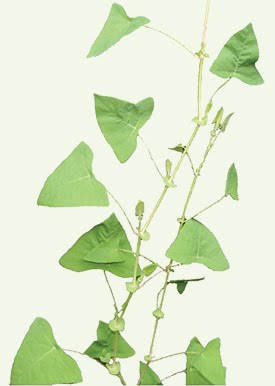 The photo below demonstrates what can happen when the mile-a-minute vine runs rampant. Fortunately, this photo was NOT taken on the Aqueduct Trail. 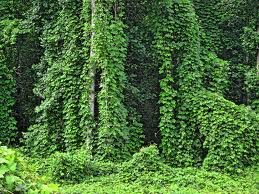 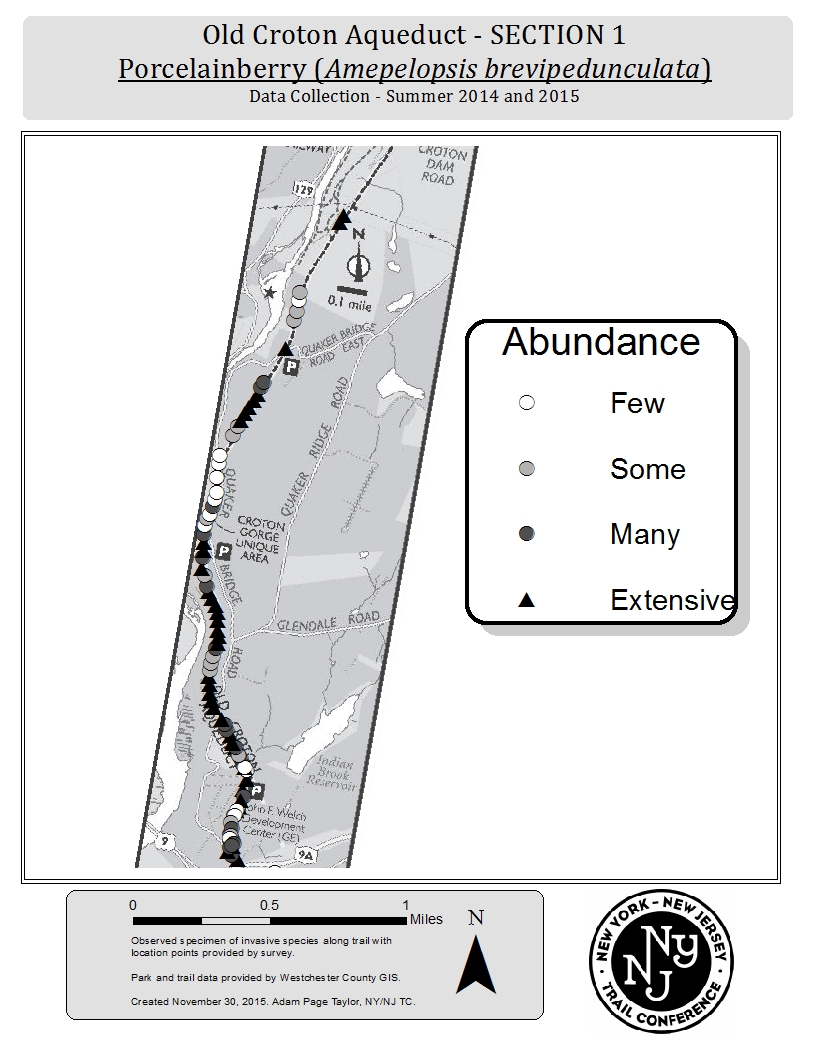 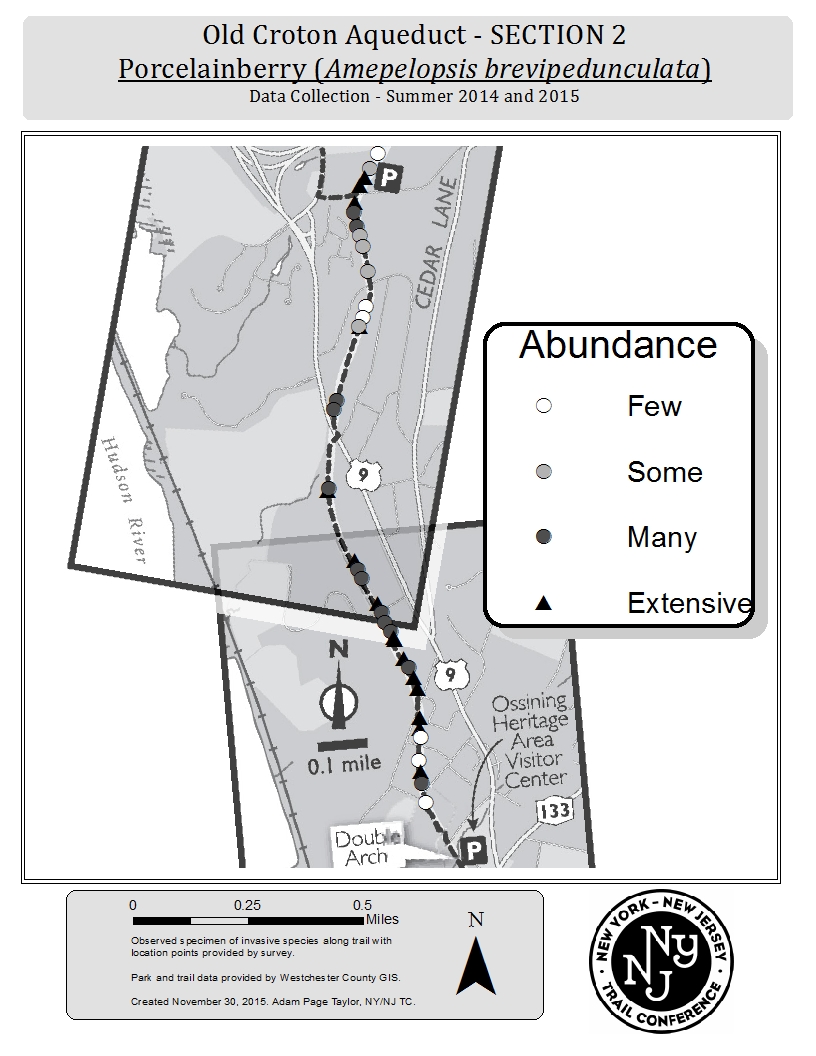 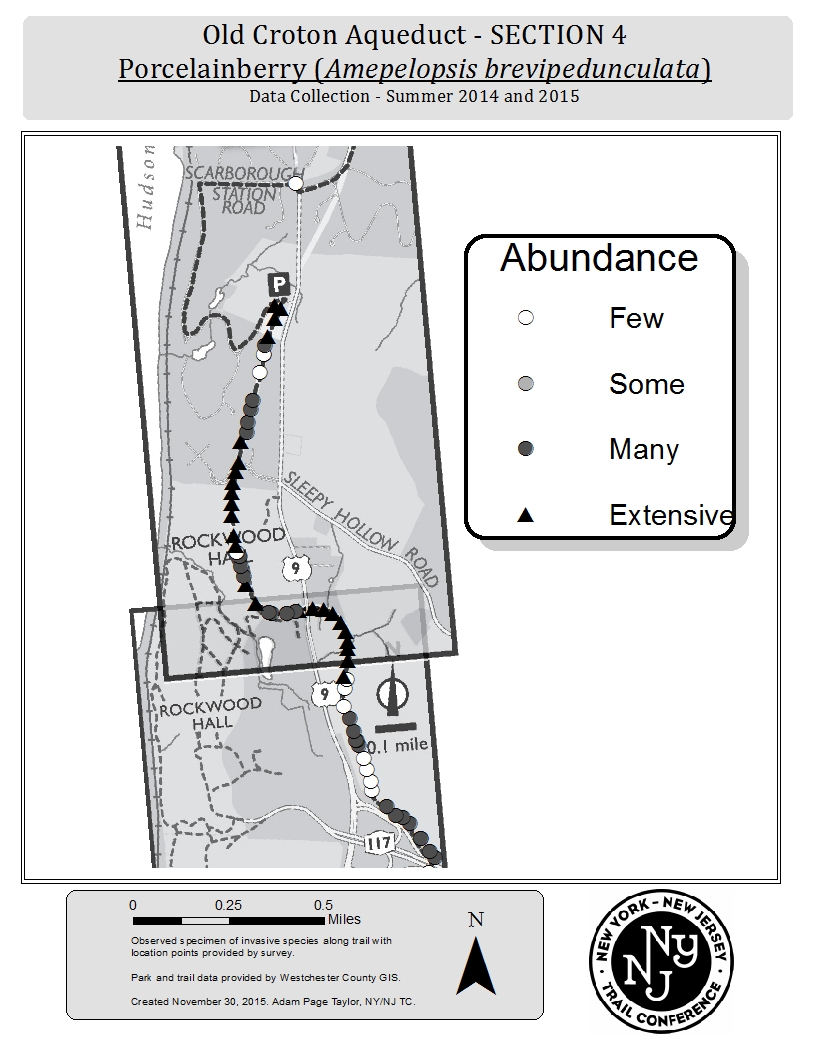 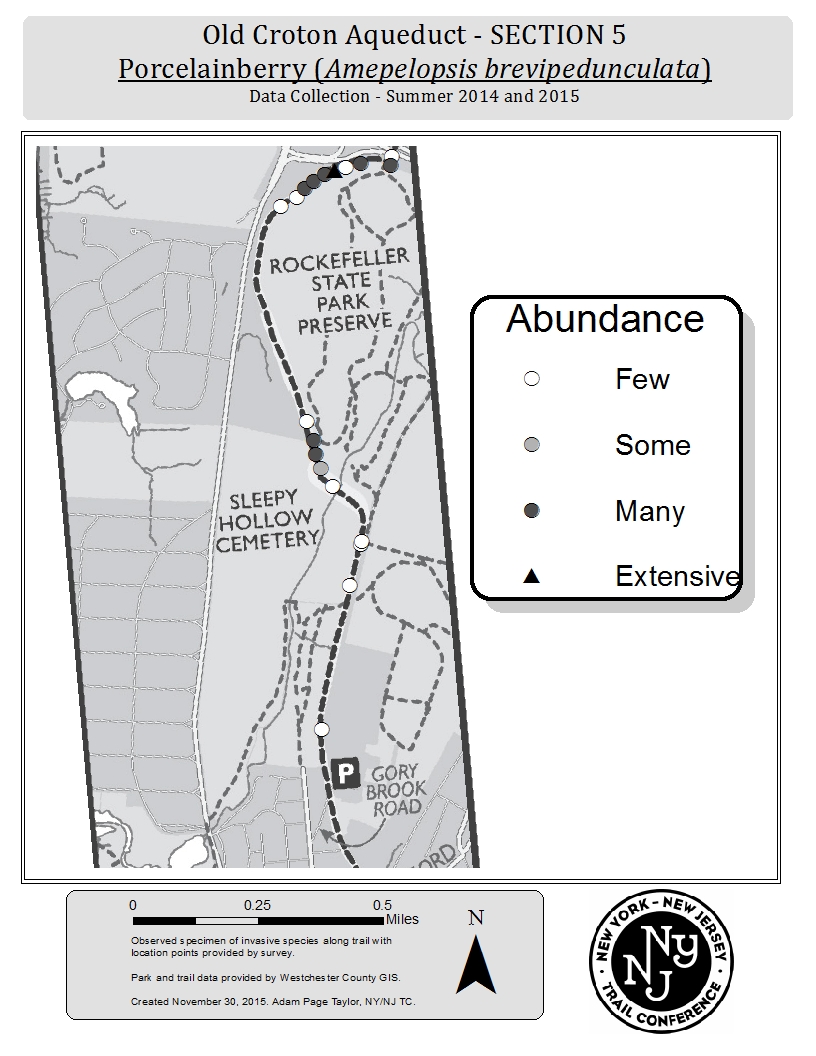 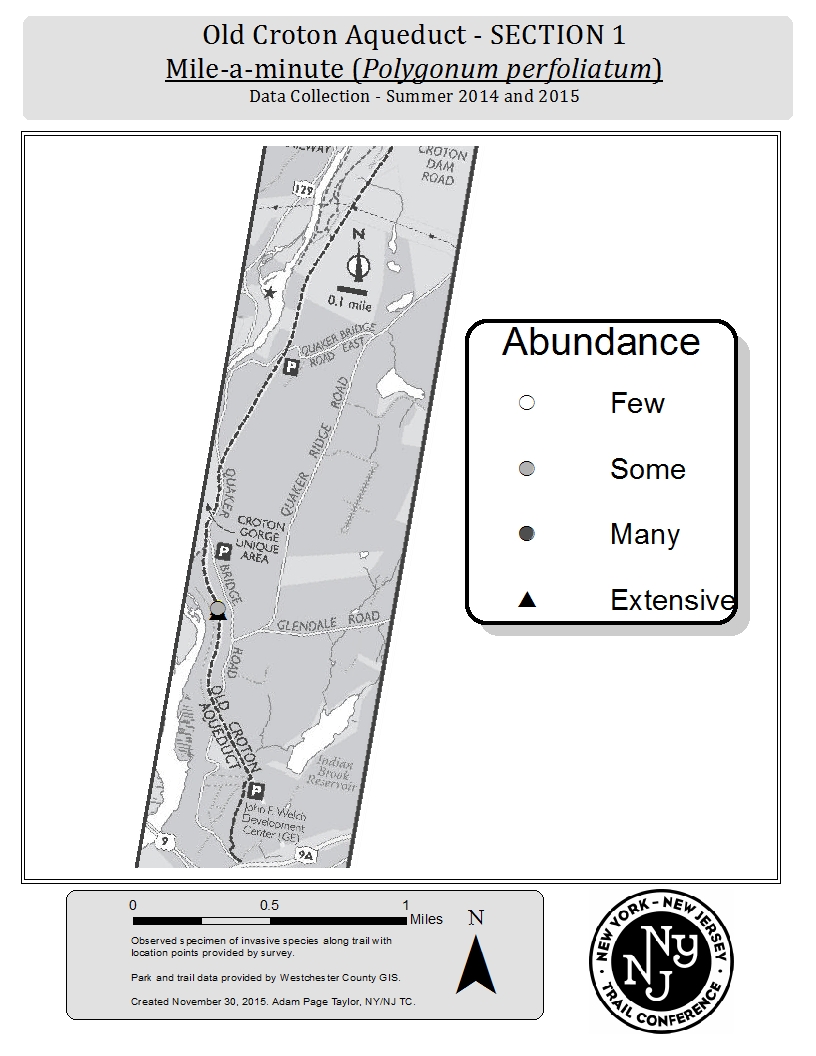 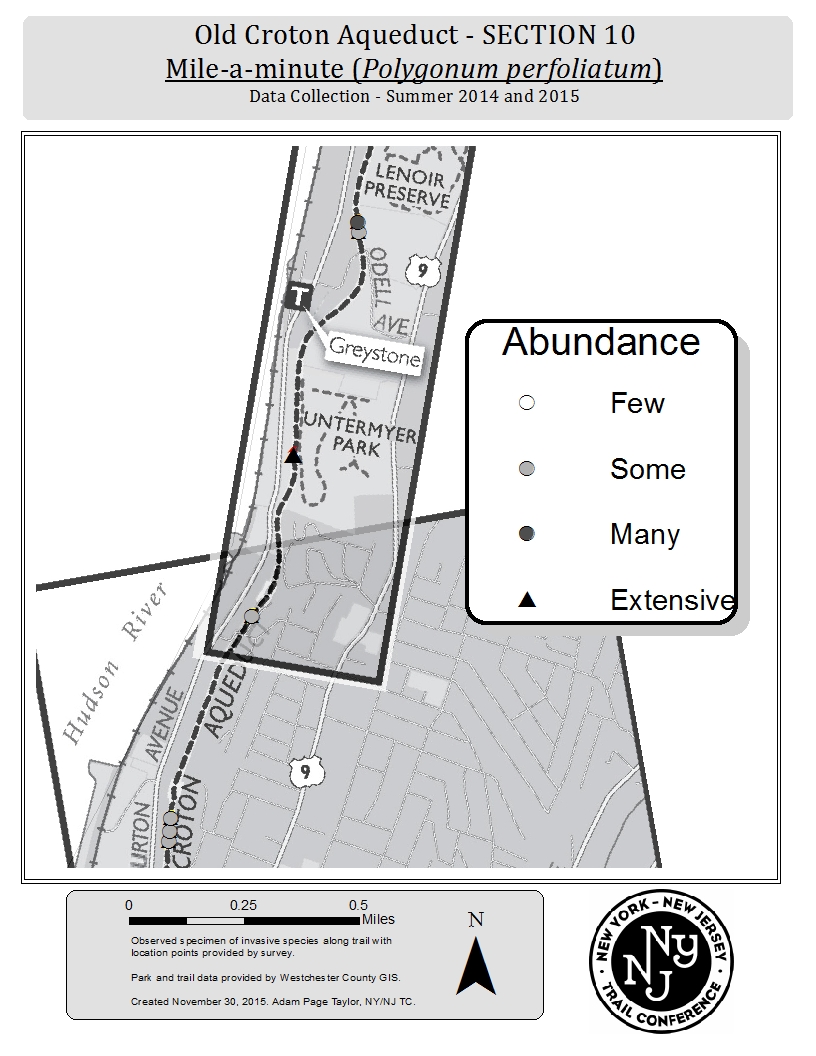 Concerns about invasive species are not limited to the Old Croton Aqueduct Trail. Programs to eradicate non-native species are being launched in many states. New York State, for example, has taken significant steps to raise public awareness and to limit environmental damage. In March 2015, the New York State Department of Environmental Conservation issued regulations banning the sale and transportation of 126 species identified as invasive. The regulations, which address the problem of other types of invasives such as non-native insects, fish and other non-botanical species, cover 69 plants, 17 of which are on the list of the plants we surveyed. A color brochure with questions and answers and excellent pictures can be found at: http://www.dec.ny.gov/docs/lands_forests_pdf/isprohibitedplants2.pdf. The complete list is available at: http://www.dec.ny.gov/animals/265.html. For some species there is a grace period: for example, nurseries are allowed to sell off their existing stock of Japanese barberry. Gardeners who already have barberry, burning bush and other ornamental invasive plants in their yards won’t be penalized, although they are encouraged to consider replacing them with native plants.

The trail in Westchester County is just over 26 miles long. Its condition in terms of invasive plants varies. Some stretches are relatively invasive free. Others are being overwhelmed. Now that we will soon have a good database indicating where the invasive species are and how extensive the invasion is, we can begin the process of deciding where to focus our efforts. There are a number of options. One approach is to determine where the trail is least invaded and work north and south from there to extend the invasive free zones and then maintain them by constantly monitoring their condition and taking appropriate actions as needed. Another is to identify areas of scenic beauty that should be preserved and specific historic structures, such as stone walls, that are being threatened. In addition we might pinpoint particularly valuable trees that are being attacked by vines and could benefit from concentrated efforts. The Friends will be working together with State Parks during the coming year to review the maps, make some reconnaissance trips to identify specific areas for targeted attention and establish priorities for intervention.

The next stage will be to work on plans in coordination with State Parks. Our tasks will include identifying the best management practices for control of each specific plant and obtaining the resources including funding to deal with them. Some work has already begun as groups and individuals have undertaken management of specific sections. As we proceed, information will be available on the Friends website: aqueduct.org.

What You Can Do

Readers of this article are encouraged to nominate particular sections for attention. Please send your suggestions to dalden@aqueduct.org. You are also invited to spearhead ongoing invasive plant removal activities in your favorite section, or to volunteer when we organize specific removal events such as those planned for May 7, 2016. Questions, comments and offers of help can also be sent to Diane at the above email address. The Friends wish to thank Linda Rohleder, Ph.D., who runs the invasive programs at the Trail Conference, for her leadership and assistance. Dr. Rohleder is also the Program Coordinator, Lower Hudson Partnership for Regional Invasive Species Management (PRISM), a program of New York State Dept. of Environmental Conservation that is administered by the Trail Conference. Also thanks to State Park interns Daniel Marello and Mathew Wersebe, to Adam Taylor, volunteer at the Trail Conference who produced the maps, and to all of the volunteers (including some Friends' members) who walked the trail to do the survey work. 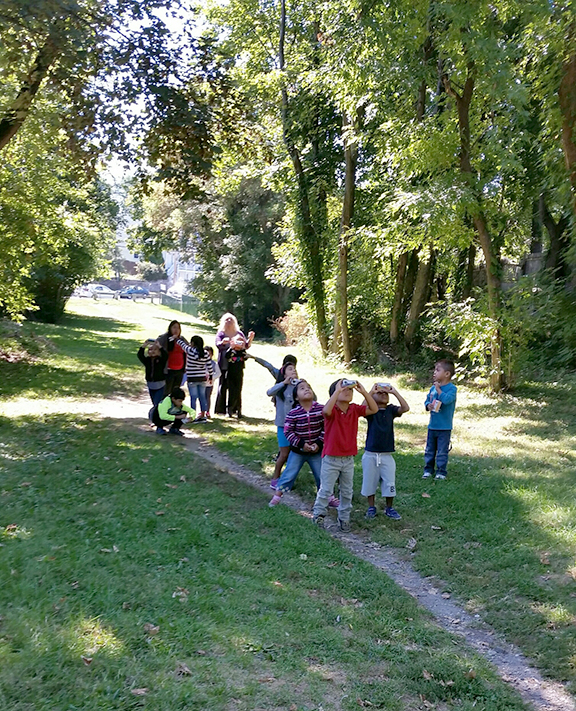 Birdwatchers encountered on the trail during the invasive plant survey. Photo by D. Alden

The Old Croton Aqueduct in the 1920s

A Tale of Two Arches

Keys to the Croton Reservoir on display

Reopening of the Highbridge Step Street