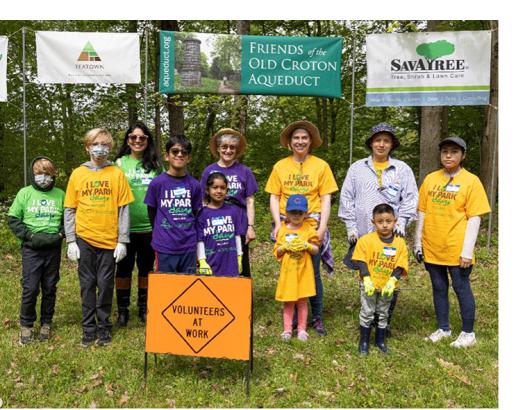 An amazing series of I Love My Park Day events took place in May and June of 2022 on the northern section of the Aqueduct trail, sponsored by Parks & Trails NY and hosted by the Friends of the Old Croton Aqueduct.

On April 15 the crew leaders and the OCA Park Crew came together to walk the trail to assess and plan the work ahead. Our group included Steve Oakes, Historic Site Park Manager in the green hat, David Bonacci in the green shirt on the left and Robert Lee in the front, to select those areas on the trail where we determined we could make the most impact and to decide who was going to work where. Linda Rohleder in the blue shirt chose the secret grotto, Mike Young in the green shirt on the right chose to work with the Barberry bushes in an area where he had worked before. Alice next to me on the left planned to work with the families with children to remove Garlic Mustard and Bob to the right of me, the pied piper of vine cutting, identified tree strangling vines to manage. Leigh Draper from Teatown (between Linda and Mike) planned to stay by the entrance and work with the volunteers to weed the wildflower patch previously planted. The Parks crew decided to work on painting the fence that they had helped construct and planned to collect and dispose of the invasive plants removed.

Although we scheduled I Love My Park Day on May 7th it rained on that day, so we postponed most of the ILMPD activities to other days. However, the SavATree crew was determined to make a difference on the trail, and since they could not come on the May 14th rain date, Stacey Parthemore, her sister-in-law, and two SavATree crew members came and worked on the trail with me in the rain and accomplished an enormous amount.

With a hedge trimmer, chain saws, and a chipper, and determination, they removed multiflora rose bushes in a swampy area and also a large invasive tree. The crew very carefully worked around the native spice bushes in the area and without so much competition, they will now be able to flourish.

Here is a video of Stacy with her hedge trimmer looking very graceful as she attacked a multiflora rose bush. https://youtube.com/shorts/RTbqsVbOBH8?

Thumbs up for a job well done, and determination despite the rain.

In order to minimize the re-sprouting of the mufti-flora rose bushes that were cut down, Ryan from the Invasive Strike Force came on another day and did some very delicate herbicide treatment by “painting” the cut stems. Teamwork! Here he is:

Subsequent walks on the trail have revealed some specular native plants emerging where SavATree removed so many invasive species. I found an unusual plant called Common rush or Juncus effusus, but it was being taken over by Japanese stilt grass and multi-flora rose. I convinced fellow trail walker Paula, to remove some of the stilt grass to help the rush thrive. So, one day she showed up with hat and gloves and a weeding tool and went to work. 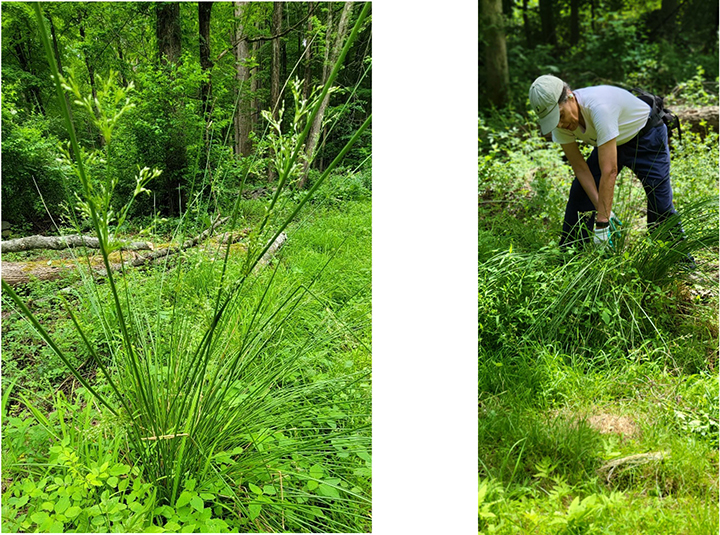 On the rain date of May 14th, 59 volunteers came to work at the Quaker Bridge Road location. 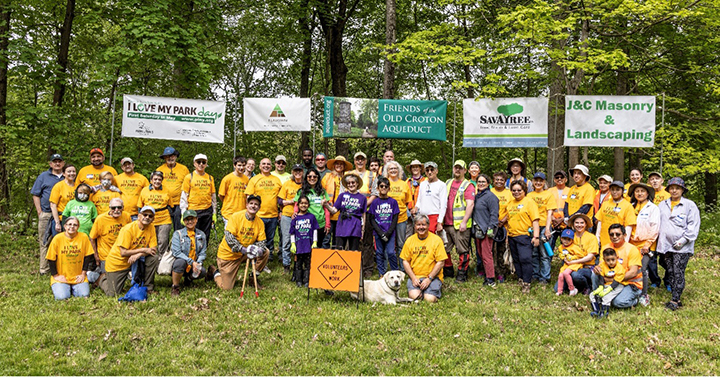 They were welcomed by James Creighton, the Deputy Town Supervisor of Cortlandt and by Brian Pugh, Mayor of Croton on Hudson. Here is James Creighton speaking to the volunteers. 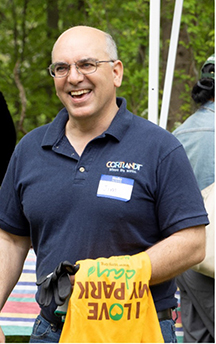 We are very grateful to those who sent us photos as well as the photographers we recruited to help document our work and our successes. Here is Mayor Brian talking with photographer Chris Mahoney. 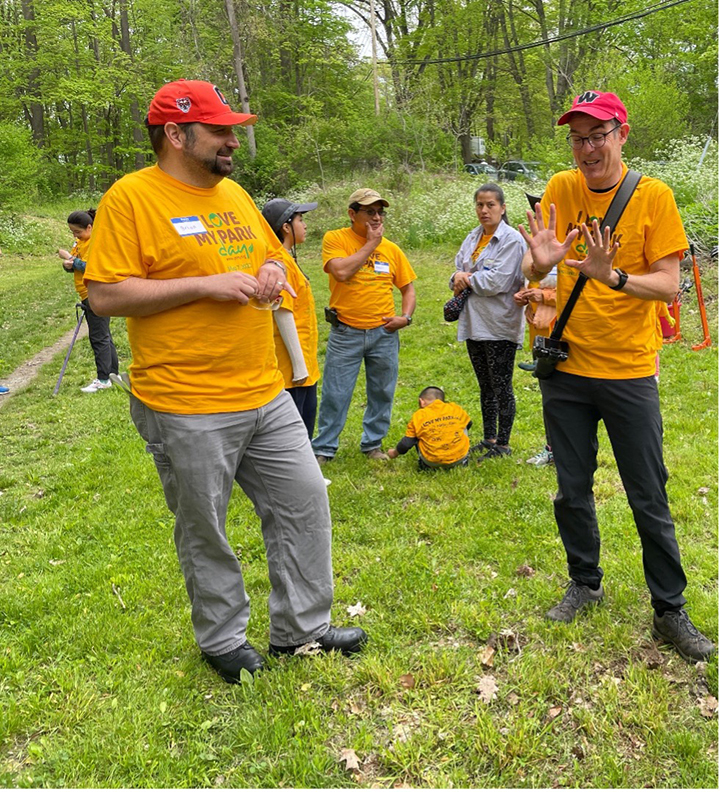 This photo was taken by the other photographer we had recruited, Rick Sammon. Here is Rick being photographed by his wife Susan: 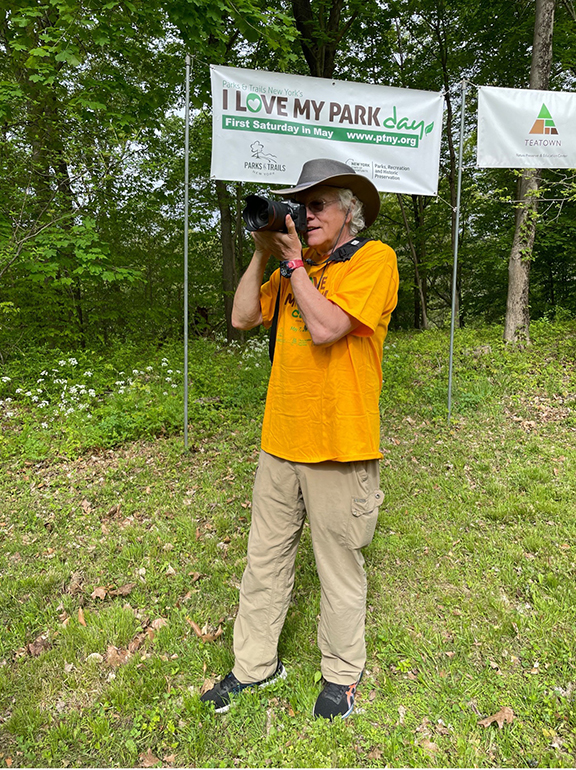 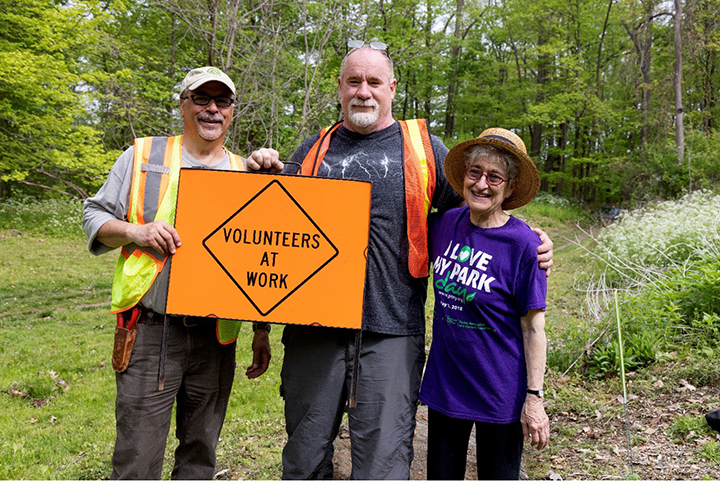 And Guy Pardee of Suburban Native on the right, another expert and dedicated remover of tree strangling vines. When I asked him for a description of what his company does, he said, “Native landscapes and wildlife habitat restorations for humans and other animals.” Guy and Bob were too focused on educating their volunteers and cutting the vines to take photos of their work on the trail, but walking on the trail I see evidence of the vines they cut and the trees they have saved.

We were gratified to have so many volunteers show up from the local neighborhood and environs, including families who came with their children to tend the trail. 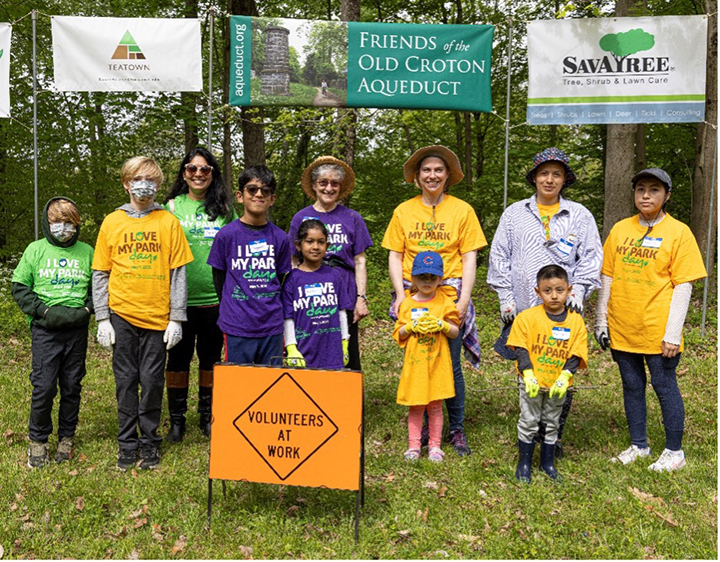 We divided into groups. Alice Lee and her husband Jonathan led the Garlic mustard crew of children and their families; they worked along the hillside of the trail and removed 525 pounds of that destructive plant! Alice took this photo. 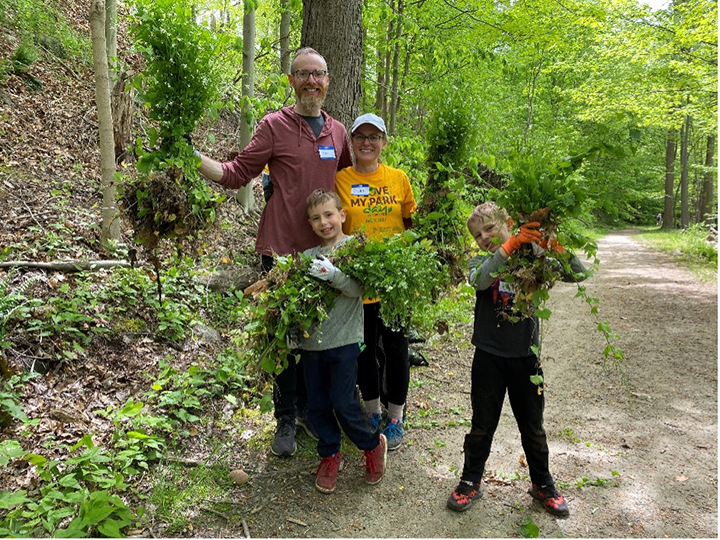 Chris Mahoney took this photo of the work being done on the hillside. 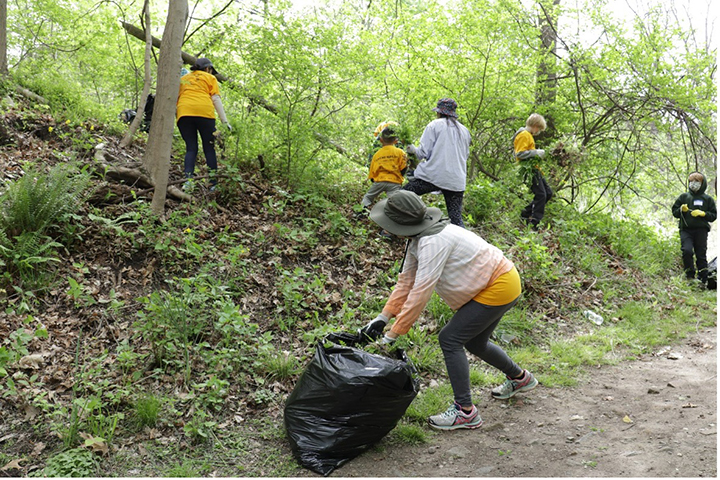 Here is our youngest, enthusiastically bagging the Garlic mustard. 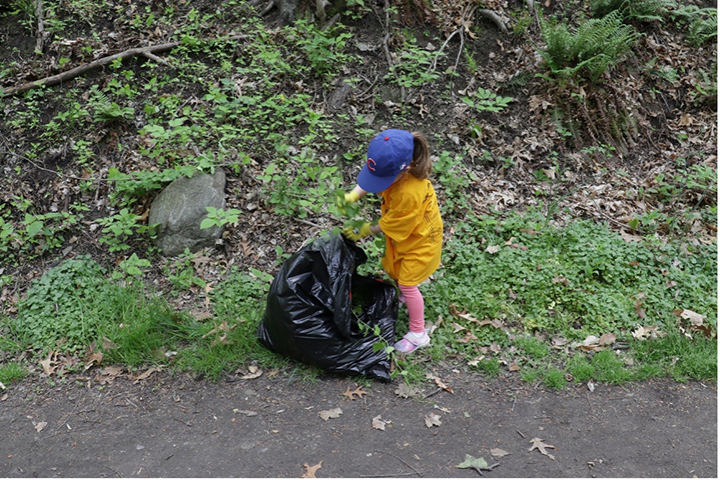 The fence painting group was joined by Mayor Brian Pugh, pictured here with some of the volunteers, including crew leader, handyman and master painter, Pablo Mora. 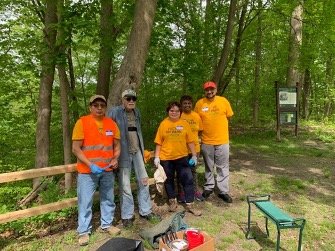 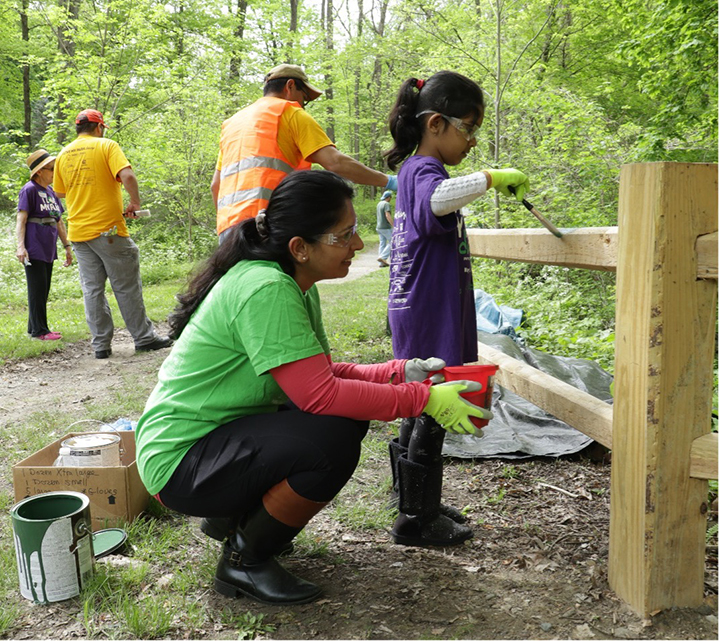 Continuing our tradition of restoring stone walls, our volunteer stone mason, George Cabrera, returned for yet another year with his assistant Carlos to work on restoring the low stone wall close to the entrance to the trail on Quaker Bridge Road, with the help of volunteers. 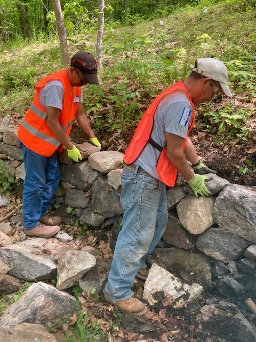 George has been volunteering for ILMPD on the first Saturday in May since 2016 and worked under contract with the Friends of the OCA to do a major stone wall restoration during the last 10 days of March. Here is a link with the saga of the stone walls showing what has been accomplished over the years. https://aqueduct.org/wall-preservation

And here is a link to George’s website: https://www.jandcgeneralcontractor.net/

We also worked to rescue some of the native plants growing on top of the stone wall. We removed them in the morning and in the afternoon, four people replanted the native plants which included Early saxifrage, White wood aster, Plantain-leaved pussytoes, and Solomon seal. 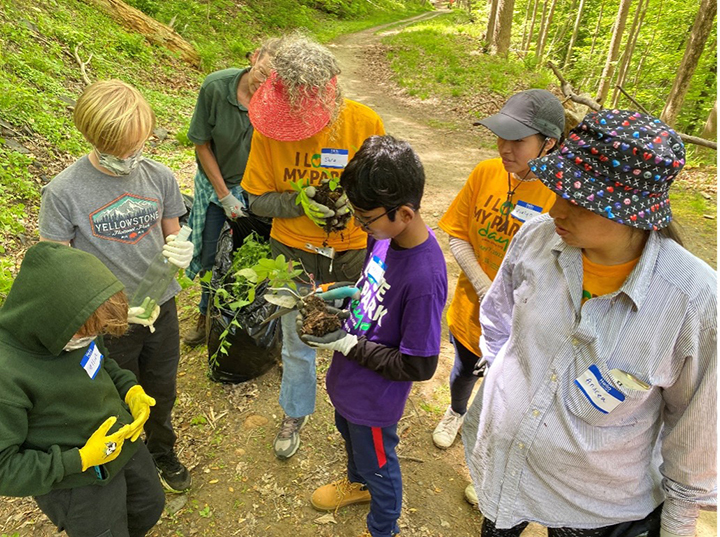 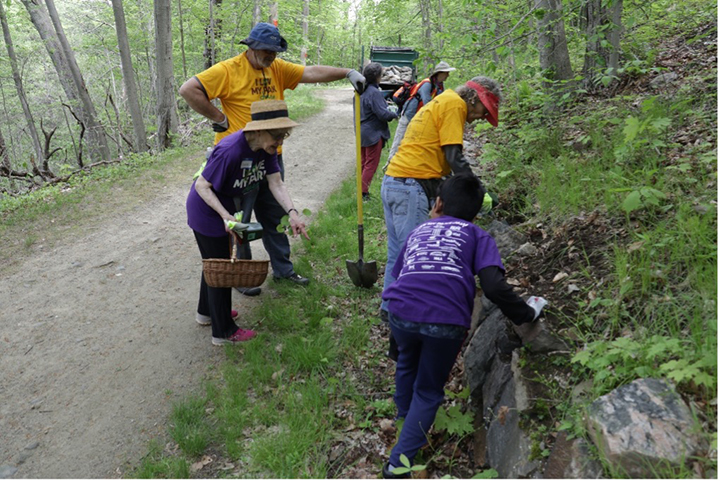 Mike Young, long time ILMPD crew leader and mentor, was joined by William Kellner, an enthusiastic returning volunteer, in tackling the invasive and prickly Barberry bushes, which are known to alter the Ph of the soil and to harbor ticks. Between the two of them they dug up 200 plants in a section of the trail bordering Quaker Bridge Road East, including 110 Barberry bushes; Oriental bittersweet, Siebold’s viburnum and Wineberry accounted for the other 90 plants removed. 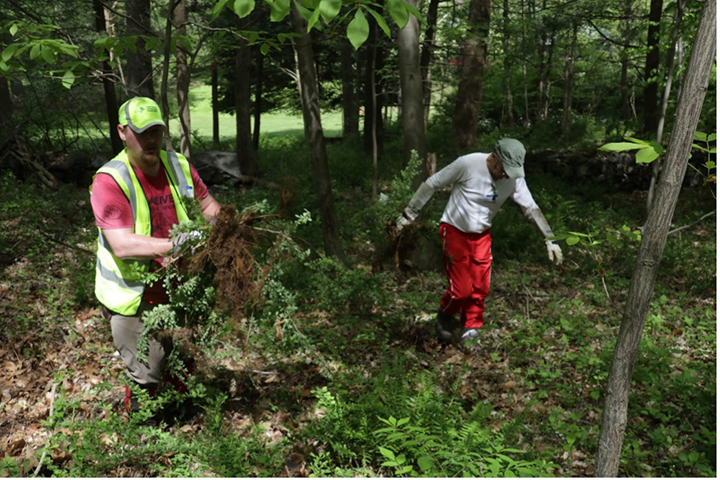 Walking on the trail as I do almost daily, I was amazed at the difference – no Barberry bushes in the section on which they worked. But then I became distraught at seeing the garlic mustard thriving in that spot. I kept my antennae out for possible volunteers to remove them and found them when another group working at the Croton Dam on May 29 limited to adults requested an opportunity to involve their children on the trail. How could I refuse them? On June 5 we had a Pop-Up Garlic mustard pull.

The youngest child was 2 and the oldest, 14, with a total of 13 volunteers completely clearing the area of Garlic mustard. We weighed the bags filled with Garlic mustard: 140 pounds! This was a joyful and delightful event.

Friends Luna and Wren worked together to pull Garlic mustard and the children and their families worked enthusiastically to remove and bag and were pleased with their accomplishments. 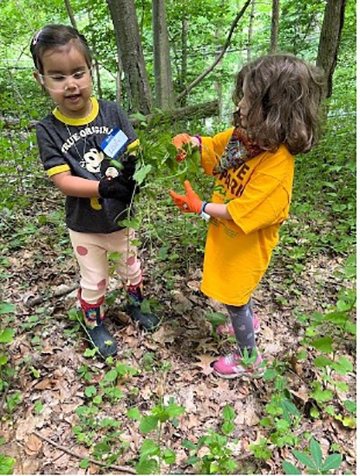 Here is Asher pulling the cart loaded with garlic mustard bags to my car for disposal.

Back to ILMPD, I enticed another group to take a long walk on the trail to work with Linda Rohleder, our long-time mentor and crew leader, to work in an area we called the secret grotto. Here is a video of the grotto I took one day in April. https://youtu.be/Qu-Pni7fdCA

Here is Linda before starting out, helping to orient us in the beginning of the day. 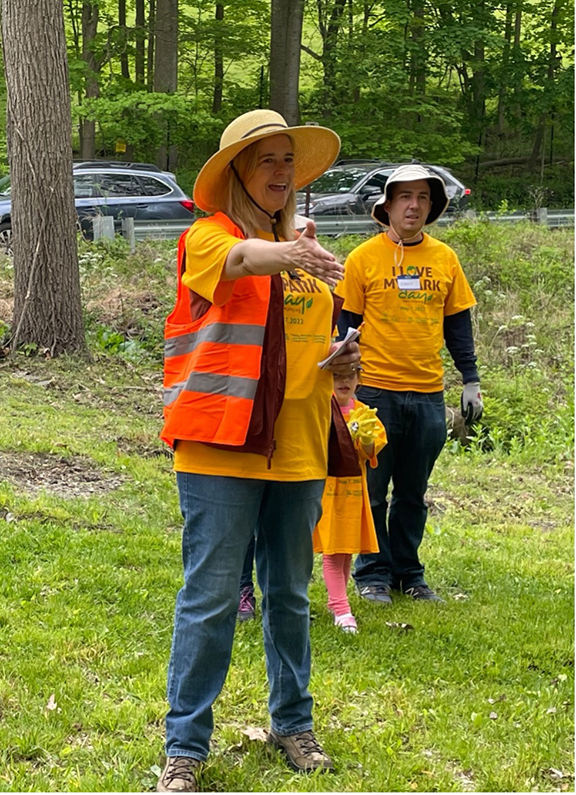 Here is Linda’s report: “In the morning we had 9 people removing invasive plants around a nice little grotto along the trail. The area was about 30x20 feet. Invasive species we dealt with included privet, oriental bittersweet, burning bush, bush honeysuckle, and garlic mustard. We uncovered and protected native bloodroot, trout lily, avens, wild geranium, Virginia creeper, Christmas fern and jewelweed.” Here is the "After" photo taken by Linda:

But the story does not end there; Linda is starting a new not-for-profit organization called Wild Woods Restoration Project to organize volunteers to grow native plants from local ecotype seeds. As a result of working on the trail that day, populations of wild geranium were spotted blooming where Stacy and SavATree had worked the week before, and Linda requested that I collect the seeds when they became mature, which I did. Those seeds will be used next year to grow plants, some of which will be designated for the trail. And three ILMPD volunteers, one of whom met Linda for the first time working at the grotto, are now growing seedlings of other native plants from the Wild Woods Restoration Project, destined for planting this fall.

May 29 was the rain date for NY NJ Trail Conference’s Invasive Strike Force’s section of I Love My Park Day. 14 volunteers joined 6 Invasive Strike Force crew members with the goal of managing Siebold viburnum trees above the Aqueduct Trail near the Croton Dam. The goal for this group was to remove large flowering and fruiting trees to prevent spread onto the OCA.

The Invasive Strike Force of the NY-NJ Trail Conference, led by Ryan Goolic McClean returned on June 11th to continue its work with the help of 5 volunteers and 10 Invasive Strike Force crew members including their colleagues from the Aquatic Strike Force. They reported that they were successful at cutting down and treating all of the fruiting trees on the hill that they could find. This was major accomplishment.

Here are some of the crew members, with their tools and equipment laid out for the day’s work.

We found a blue bell patch which was flagged when it was found blooming last year earlier in the season (see blog from 2021) and some of the volunteers were eager to remove all of the non-native plants invading the patch.

Bill Kellner, who worked so effectively on May 14 removing Barberry bushes came to this event and continued his campaign to pull these bushes up by the roots. Then he worked on the target species of the Invasive Strike Force: Siebold’s viburnum. 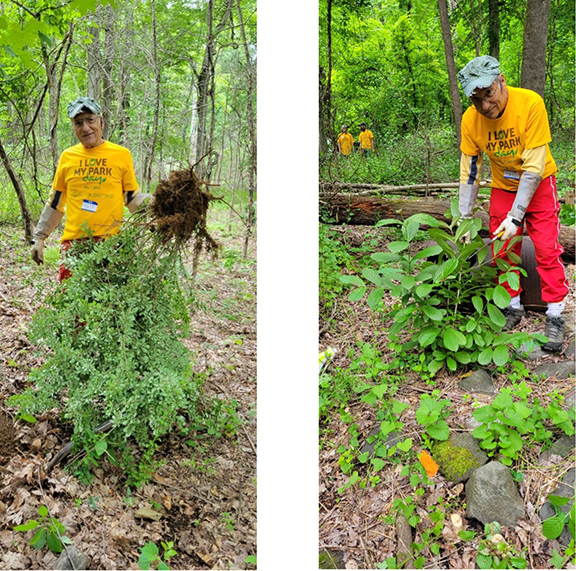 The Ossining section of ILMPD led by Daria Gregg took place on May 14 and included 13 volunteers. They reported removing 267 pounds of Garlic mustard and even tackled the difficult to remove Lesser celandine, digging up 403 pounds from one section.

Then, inspired by the work of the volunteers and by the involvement of some of the Aqueduct neighbors, we held a celebratory guided walk on the Trail on July 30.

Daria was able to show off all she has accomplished over the years on the section of the trail in Ossining she has adopted. 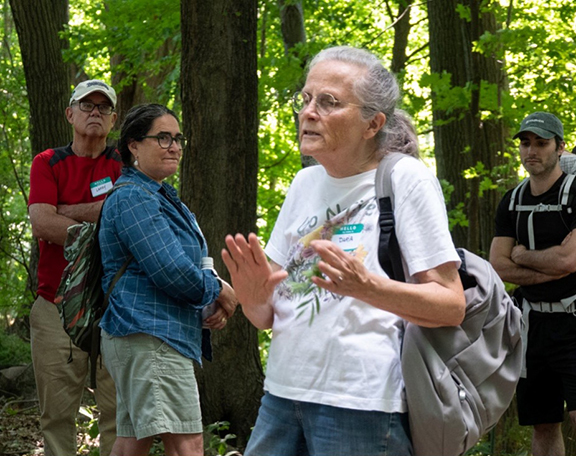 Congratulations and gratitude are due the 158 volunteers who dedicated time, enthusiasm and energy to tend our beloved trail during this extended I Love My Park Day.

Watch for the next installment of our saga – more documentation of the celebratory walk, which includes interesting stories of additional contributions by neighbors living along the trail.