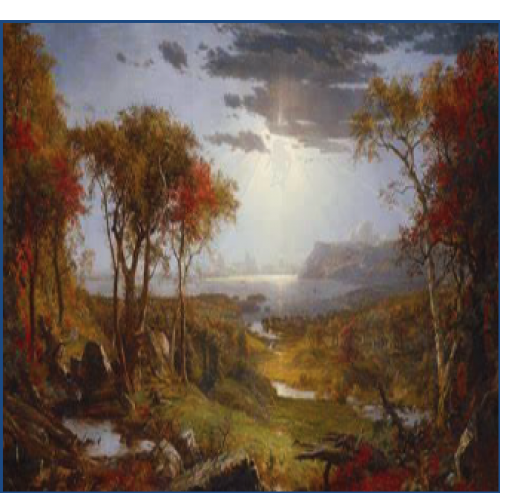 Jasper Cropsey was a well-known Hudson River School painter in the mid 19th Century. His landscapes reflected his interest in the influence of nature on man’s existence, a concept that was fundamental to Hudson River School artists like Thomas Cole and Asher B. Durand. These were the first painters to romanticize the American wilderness.

In the 1860s, Cropsey designed architecture and painted. For his family, he designed a Gothic Revival, 29-room mansion called Aladdin in Warwick, New York. When tastes in painting shifted toward Impressionism, Cropsey’s financial situation faltered, and in 1884 the family (then with four daughters) was forced to give up Aladdin. They settled instead in Hastings-on-Hudson, New York, in a house they called Ever Rest, where Cropsey and his wife lived together until they died.

If weather permits, we will go for a walk along the Aqueduct after the presentation. Participants will be asked to voluntarily wear a mask when indoors. Free KN95 masks will be provided to those who would like one.

Meandering among the Mansions of the Historic Millionaires

A History of Quarry Park, Hastings