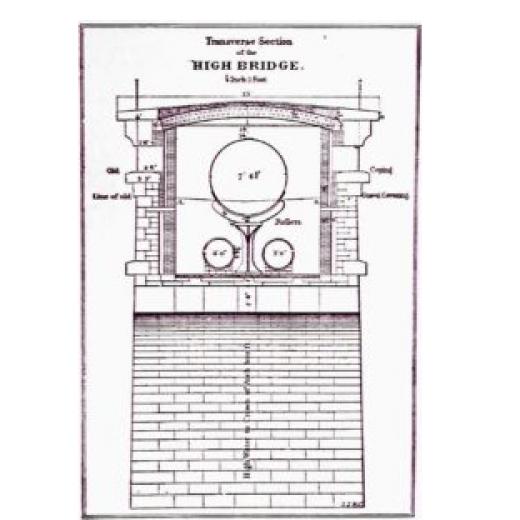 As history would have it, some designers are broadly associated with their works, like Frederick Law Olmsted with Central Park or John B. Jervis with the Old Croton Aqueduct. John James Robertson Croes was not one of those, yet many of us live in a more beautiful environment because of his talents.

Croes was born in 1834 in Richmond, Virginia, son of a clergyman and grandson of a Revolutionary War veteran. He attended the College of St James in Hagerstown, Maryland, and studied civil engineering, graduating in 1853.

In 1860, Alfred W. Craven, Chief Engineer of the Croton Aqueduct, made Croes Principal Assistant to General George S. Greene for the design of the New Central Park Reservoir, the installation of the large pipe on the High Bridge, and other parts of the Croton Waterworks Extension. When General Greene joined the Union Army in the Civil War, Croes took over those projects.

In 1866, Croes worked on the first project of an ambitious plan of Craven’s to build a series of dams and storage reservoirs along the Croton River in northern Westchester and Putnam Counties. He assisted with the design of the Boyd’s Corners Dam, a pioneering high masonry dam. Soon Craven retired and General Greene took his place as chief engineer. Croes took over construction of the dam until it was nearly complete in 1870, the year the Tweed gang took over the Croton Aqueduct Department, incorporating it into the infamous Department of Public Works. Croes’s and Greene’s integrity made them incompatible with the Tweed gang, and they were pushed out.

Croes presented a paper to the American Society of Civil Engineers in 1872, entitled “Memoir of the Construction of a Masonry Dam,” which described the construction, including the sleazy shortcuts of the Department of Public Works. The society was so impressed by his whistleblowing candor that he was awarded a gold medal, and the society decided to make it annual and name it for him. Today’s engineers know the Croes Medal, but probably know little about its namesake.

In 1874, New York City annexed a portion of South Yonkers, which became the 23rd and 24th Wards, in what would later be the west Bronx. The Department of Public Parks appointed Croes as Civil and Topographical Engineer and Olmsted as Landscape Architect to design roads and parks for the area. By 1877, their drawings were adopted by the city.

Olmsted was propelled by his recent success at Central Park. Still, the city plan for the 23rd and 24th Wards collided with local interests, foundered, and finally was remembered mainly for muddy, unfinished roads. Croes and Olmsted complained in correspondence to each other about their “political masters,” and before long, Olmsted fled to Brookline, Massachusetts. Portions of the Olmsted and Croes city plan can be seen in the current roads of the Kingsbridge Heights, Fieldston, and Riverdale sections of the Bronx.

Croes was also one of the first Palisades Interstate Park Commissioners, and he advised and assisted tirelessly in the creation of the park. He also worked on the design of roads and parks in northern Manhattan. During the final years of his life he was a professor at Princeton University. When he died, in 1906, he was a leading civil engineer.

Croes did not produce one particular work that gave him lasting fame, but he was a brilliant, cultured engineer who contributed to the beauty of roads, parks, and civil engineering works that we admire on a daily basis. When you look across the Hudson River at the Palisades; or explore the beautiful roadscapes of Riverdale, Fieldston, and northern Manhattan; or admire the beauty of the Central Park Reservoir and High Bridge, remember that without the work of J. James R. Croes, it would all be different.