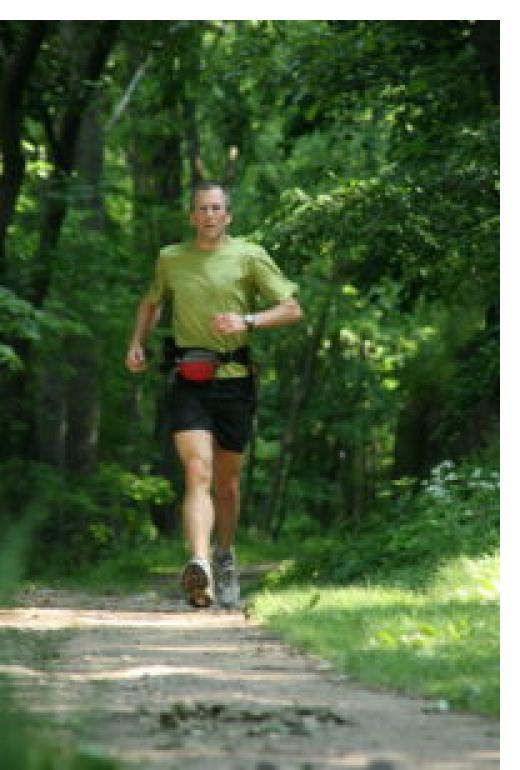 A Dedicated Friend, Peter Bakwin wrote this entry about jogging the entire length of the Old Croton Aqueduct (41 miles!)

I grew up in Colorado but spent summers visiting my grandparents at their sprawling Westchester home. There were woods to explore, a lake to swim in, and many cousins for companions. Years later, when I started running ultramarathons, I felt an urge to run from that house, now owned by my father, into New York City. The house is just a few miles from the Croton Reservoir, so the Old Croton Aqueduct was the obvious route.

Averaging just 60 feet wide, the Old Croton Aqueduct State Historic Park must be one of the world’s skinniest parks. Running the aqueduct trail in Westchester is a curious experience—it often feels remote, yet you are never far from human habitation. You peer into backyards and dart across roads. Often you are forced to leave the aqueduct itself to detour around buildings and highways. Once in a while, you pop out of the woods and into the center of one of the many towns along the Hudson River: Ossining, Tarrytown, Irvington, Dobbs Ferry, Hastings, and, finally, Yonkers. All of which are excellent places to resupply with food and water.

I left Dad’s house at first light on a May morning and ran toward the reservoir, the air crisp and clear. An hour of easy jogging brought me to the elegant stone Croton Dam and the start of the trail. Now it was a straight shot, 41 miles to the New York Public Library. The soft ground and flat grade made for easy running. I love running alone with a breeze in the trees, listening to birds and the sound of my own breathing.

Stately stone ventilators mark most one-mile intervals, vivid reminders of this engineering marvel. Like the Roman aqueducts, this one was driven entirely by gravity.

In Ossining, Dad met me with snacks and drinks at the famous Double Arch—two overlapping bridges over the Sing Sing Kill gorge, now a town park. Ossining is the only town that still uses the Aqueduct for water; elsewhere it houses telecommunications lines. I ran the town streets for a few minutes, then scampered across busy Route 9 and dove back into the woods. After a short diversion to a pedestrian bridge over Route 117, the trail passed along the east side of the Sleepy Hollow Cemetery immortalized by Washington Irving.

Charming Tarrytown tempted me with its cafés, but I pressed on. After a short section along Route 9 to cross the New York State Thruway, it was back into the woods. Soon, I crossed the lawn of the ostentatious Lyndhurst mansion, once owned by the railroad baron Jay Gould.

I met Dad again in front of the derelict Keeper’s House in Dobbs Ferry, which since my run has been restored as a Visitor and Education Center.

The miles went by pleasantly, with occasional views of the Palisades across the Hudson. Navigating downtown Yonkers was tricky, but the map put out by the Friends of the Old Croton Aqueduct helped me find my way. When I reached Van Cortlandt Park, I was excited to be entering New York City. After 30 miles, I still felt great.

Once through Van Cortlandt Park, the rest would be city streets and urban parks. The aqueduct crosses the Harlem River via High Bridge—the oldest bridge in the city, which was recently reopened to pedestrians after extensive restoration. I crossed the Washington Bridge and got to High Bridge Tower just as Charlotte Fahn, of the Friends, was concluding a school group tour. It was a rare opportunity to ascend the 200-foot tower. Despite my tired legs, I climbed the spiral stairs and was rewarded by outstanding views.

The sidewalks of Amsterdam Avenue were tough on my legs, and the heat was getting to me.

At 85th Street, I entered Central Park. South of the park the sidewalks were jammed, so I walked with the flow of pedestrian traffic, feeling out of place in my dirty and sweaty running clothes.

Nearly eight hours after walking out of Dad’s front door, I reached the 42nd Street library. I tried to imagine what it must have been like here in the 1840’s, standing next to the reservoir’s 50-foot walls. By following the route of this historic structure under my own power, I felt a connection with the past that I could not achieve any other way. I am thankful to all those responsible for preserving this historic route.

Construction of the High Bridge

New Historic Images of the OCA

No Publicity is Bad Publicity!

Seen on the Trail Dept: Chicken of the Woods