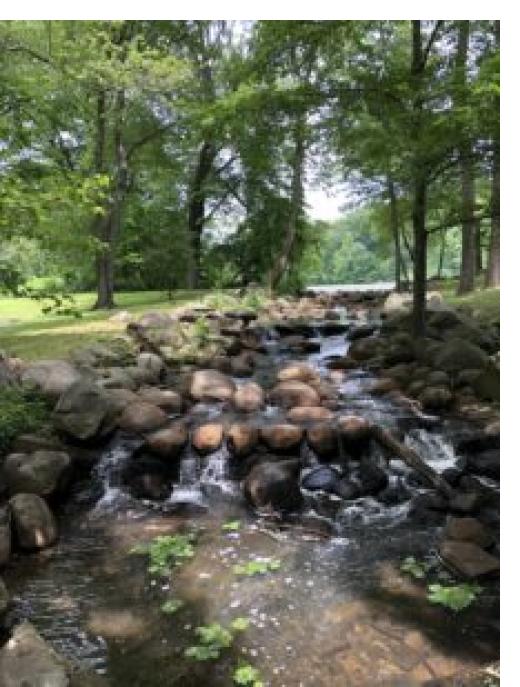 Because the Old Croton Aqueduct was powered by gravity alone, the Aqueduct and the trail above it do not follow a straight line. Instead, to maintain the average 13.25-inches–per–mile downward slope of the tunnel on its journey from the Croton Reservoir, its path follows the ridges formed by ancient glaciers. Armed by the early and forceful exercise of eminent domain, New York City constructed its tunnel through public and private property in a single-minded quest to meet citizens’ urgent need for clean, abundant water.

The trail’s winding journey provides an unparalleled opportunity to explore not only the engineering feats of the Aqueduct, built in just five years from 1837 to 1842, but also the natural beauty and multilayered history of the Hudson River Valley and New York City.

Walks and tours along the Aqueduct feature many such discoveries. One walk follows the route of Tibbetts Brook, from its beginnings in H.F. Redmond Junior Park in Yonkers, named after a post-World War II Yonkers patriot. Tibbetts Brook was originally referred to as Mosholu by the Lenape Native Americans. The brook’s current name is an altered version of the name of a 17th century British settler of the land, George Tippett.

There are several points of access to Tibbetts Brook Park from South County Trailway, which runs north to south on the western side of the park. Redmond park provides easy access to South County Trailway, on the route of the old Putnam Railway, affectionately known as the “Old Put.” The park provides free parking near the access point to the rail trail. As you travel south on that trail, you can see a structure of the New Croton Aqueduct to the east.

In 1927, Westchester County opened Tibbetts Brook Park on land confiscated from the Tippett estate following the American Revolution. The county cleared the land and restored the purity of Tibbetts Brook, which had become polluted by a dump to the north. Within the park there is a varied network of trails. Crossing the northern section on one of these trails, you can connect with the Old Croton Aqueduct trailway, which runs through the park on its eastern side.

Here at Tibbetts Brook Park’s northeast corner, the Old Croton Aqueduct runs through the park, with the New Croton Aqueduct just to the east. Several old New York City waterworks structures can be seen along the trail. Nearby is one of the Aqueduct’s tall cylindrical stone ventilators, which originally served to freshen the water in the tunnel. Another ventilator can be seen on the trail just after it emerges from the park’s southern border.

You can reach Van Cortlandt Park to the south via either the Aqueduct trail or the rail trail. But do not do so before exploring the trails within Tibbetts Brook Park on the shores of two lakes, lined by trees and wildflowers, bisected by a waterfall and a wood–and–stone footbridge. You will discover a great variety of birds and other wildlife. North of the lakes, there is an elaborate water park, attracting families like a magnet but leaving Tibbetts Brook and the lakes in relative isolation.

Tibbetts Brook continues south to Van Cortlandt Park, where it crosses America’s oldest public golf course and forms Van Cortlandt Lake, before it disappears somewhat ignominiously into a large sewer at the lake’s southwestern corner. There are proposals to daylight Tibbetts Brook so that its fresh water can flow into the Harlem River.