The opening of the Friends' trail improvement project in Dobbs Ferry was enthusiastically attended by local residents, state officials, Dobbs Ferry trustees and, of course, by the Friends. 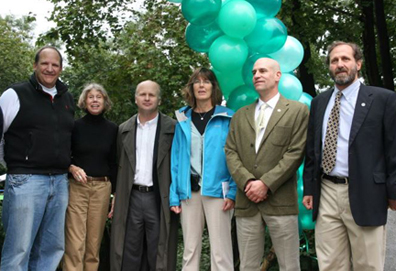 Mayor Hartley Connett spoke of the important benefit made by the new trail accessibilty to the whole area. It now looks inviting and welcoming and the hazardous blocks of cement and rocks are no more.The new ramp can safely be used by all.

NY State commissioners Rose Harvey and Dr. Lucy Waletsky represented State Parks. Rose Harvey praised the cooperative spirit between the State, the Village and the Friends that made this project work so smoothly.
Mavis Cain, President of the Friends said that this was a "People" project. 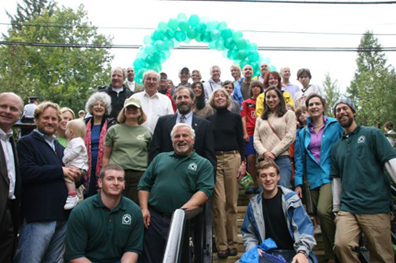 Friends show up to celebrate the occasion

Often fund raisers reach out to companies and foundations. For this project the Friends approached only residents and members and the result was fabulous. The mandatory match of $31,400 for the $157,000 grant was met quickly and generously by the community. Mavis told a few amusing anecdotes about individual donors, who got a round of applause. She then introduced Bob Kornfeld who did the first site plan which helped the Friends win the grant. He, in turn, introduced Gary Ricci, the site manager for the Old Croton Aqueduct State Historic Park.

A big thank you to all!