We are following the guidance of NYS Parks by discontinuing our walks and tours until we can once more be sure that we can safely offer events on the trail. The Aqueduct trail is still available for personal use and enjoyment, consistent with whatever the current health advisories are at the time. We are especially lucky to have the trail readily at foot during this time. 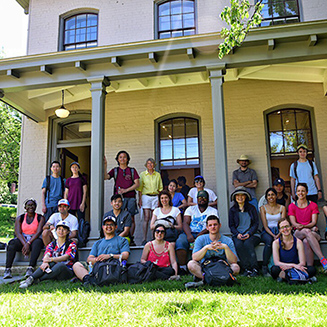 My first story will remind you of “Downton Abbey”: At four o’clock one winter afternoon, I was about to close up when a lone visitor arrived. When I learned that he had come all the way from Astoria, Queens, of course I said, “I’ll stay open for you.” And when I heard his German accent, I couldn’t resist a chat to practice my own German. I asked, “Was ist Ihr Beruf?”(What is your profession?). He answered, “Ich bin Haushalt Meiste.” I didn’t understand, so he helped me out: “Butler to you.” I asked,“You mean like Carson in ‘Downton Abbey’?” “Yes.”
His name is Niklaus. He is now as far as I know, the only butler on our membership list.

The Bearded Santa Claus
In early December, a walker arrived who looked as if he was out of a story for children. He had a long straggly beard, carried a walking stick, backpack and was wearing sturdy boots and a heavy, well-worn jacket. He deposited himself on a chair, saying he needed a rest. Then to my astonishment he pulled out a wad of hundred-dollar bills saying, “I need some maps.” He needed $200 worth of maps! — “to give as Christmas presents.”

“You must be Santa Claus!” I said. He answered, “I can’t be because I’m Jewish” — then handed me another hundred-dollar bill as a donation.

I learned that he is a mathematician who, as he put it, “haunts the halls of MIT.”

How Many Walkers Come from Iceland?
So far only two. Recently, an attractive young couple arrived at the House and were fascinated by our story. Of course, I had to get their story. They were doing a short assignment of stem-cell research at Sloan Kettering. But how did they find the Keeper’s House?

The answer was interesting: “If you are Scandinavian, or European of any kind, you love to walk. And so you Google “Interesting walks.” And guess what? The Aqueduct pops up. Their explanation made sense, no wonder we get so many European tourists.

The Best Dressed Bikers in the World
In the middle of one afternoon, a couple walked in the door and looked as if they’d stepped out of “Gentleman’s Quarterly” for international bikers.

“I can tell you two are serious bikers,” I said. “You have the correct gloves, the correct shoes and gaiters, and matching vests and helmets.” Their story was a travelogue. Recently retired from the medical world in Bremen, Germany. They had flown, with their fancy bikes, to Toronto to bike the Lake Shore and then the Erie Canal. Someone on the Erie Canal route had recommended visiting the Keeper’s House on the Aqueduct. That’s a hop, skip and a jump!

While his wife was in the bathroom, the man said to another visitor (from Quebec, as it happens), “Don’t tell my wife, but I’m planning a tour of the Gaspe Peninsula in Quebec next year.”

The Trespassers of Decades Ago
Local teenagers had possessed the Keeper’s House long before we did. We called them our happy trespassers. When we started restoring the broken-down house, we were thrilled to discover, written on the wall of an upstairs room, “The Explorers’ Club”. There followed a list of rather childishly written names of neighborhood kids who had hung out in the abandoned house, perhaps climbing in through a cellar window. We took a photograph of the names on the wall before we painted over it. It was as much their house then, as it is ours now. I discovered, with a bit of sleuthing, that one of the “explorers” is still in the neighborhood. I asked if we could take a photo of her and her cousins — fellow “explorers”. She declined. She did not want to be labeled a trespasser.  But she understood our pleasure at finding the list before we painted the walls.

And Finally, the “Lazy Walkers”
One quiet afternoon, a group of 30 walkers straggled into the House.  A diverse group, of various ages, they obviously needed a rest, having walked almost all the way to Dobbs Ferry from Manhattan. I asked if they were a special group, and they said, “We call ourselves “The Lazy Walkers.” And to think they walked all the way from Manhattan. They said the name gives them permission to dawdle. But they left the house at a gallop.……..

I encourage every reader of this column to pay a visit to the Keeper’s House and leave a story behind.