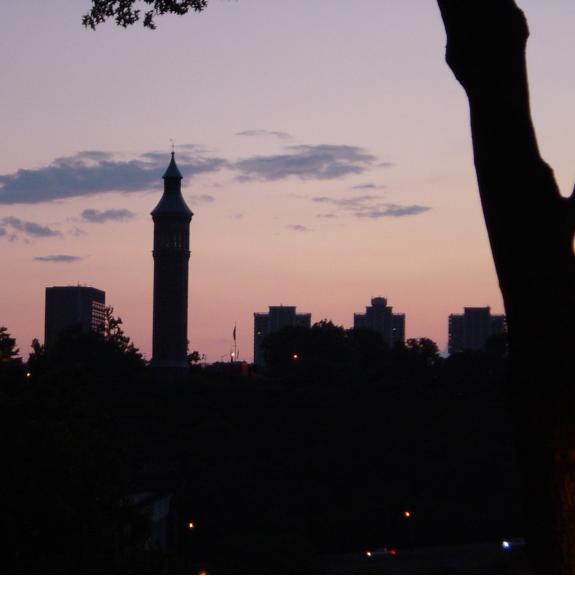 One effect of the happily welcomed reopening of High Bridge Tower in 2021 was to turn attention to the Old Croton Aqueduct’s High-Service Works, of which the Tower was a part. In fact, some accounts refer to this elegant, octagonal granite structure on the northeast Manhattan skyline as the High-Service Tower.

The original Croton Aqueduct, which went online in 1842, is famed for being entirely gravity-powered. However, as early as 1851, as development in New York City spread northward, the need to supply water to the higher elevations of Manhattan Island was recognized. North Manhattan is substantially higher than the elevation at which Croton water entered Manhattan. Pumping was therefore required, to be achieved by the High-Service Works.

The cluster of structures comprising the High-Service Works were, at the Manhattan end of the High Bridge, a wharf and coal house for receiving and storing coal, a boiler and pumphouse with a tall smokestack, and – further up the hillside - a seven-acre, 10.8 million gallon reservoir and the High-Service Tower, 170 feet high. Within the Tower, at the top, was a wrought iron pressure tank with a capacity of 47,000 gallons. Period images of the scene also prominently show a heap of slag, the waste product from burning coal, spreading down the hillside from the waterworks to the Harlem River. 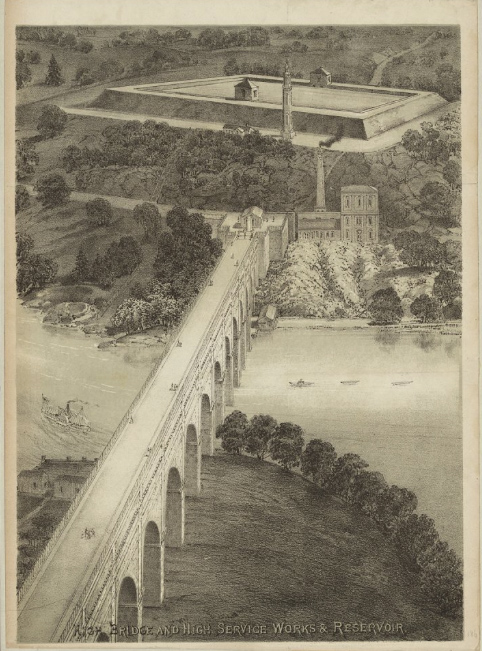 A representation of the High-Service Works. Original source unknown.

Croton water entered Manhattan from the High Bridge at an elevation of about 125 feet above mean high tide. From there it was pumped up another 75 feet to the reservoir, which was sited about 200 feet above high tide, and into the adjacent Tower. The water then ascended the Tower through one of two pipes - still in the center of the interior - to reach the tank at the top, and descended through the second pipe, under pressure sufficient to allow the water to reach the buildings of north Manhattan through a network of distribution pipes. “The highest level of the water in the tower was to be 324 feet above high tide, 57 feet above the highest point on Manhattan Island” (Wegmann, 1896).

The High-Service Works, including the Tower, were designed under then Chief Engineer Alfred W. Craven. Construction began in 1866 and was completed in 1872. Eventually, when the New Croton Aqueduct became New York City’s principal supplier of Croton water, pumping at High Bridge ended, to be undertaken where the new Aqueduct entered Manhattan. In 1934, the reservoir was demolished, part of it transformed into Highbridge Park’s huge municipal swimming pool of today. The tank at the top of the High-Service Tower is gone, but to our great good fortune, the Tower itself remains.

For many of us who are devoted to the Tower, at least as appealing as the marvelous 360-degree views seen from a height of almost 400 feet above sea level is the warm, softly colored brick-lined interior. This contrasts with the black iron of the two soaring vertical pipes in the center and of the generously proportioned winding stairway mounted along the wall. Stone-framed windows of several shapes reveal the outdoors as visitors ascend (or descend). It’s never been clear if the Tower was meant to admit the public, but in any case its design reveals a respect for civic infrastructure to be treasured.

Schedule an appointment for a tour of the refurbished Tower with the NYC Parks Department HERE.

Read an affectionate account of a visit to the Tower, from the Friends’ newsletter no. 12 (2002) HERE