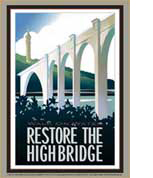 New York City's proposed design for the restoration of the High Bridge was presented to the Landmarks Preservation Commission at a hearing on April 5, 2011. The entire set of drawings can be downloaded HERE.

There was praise for most aspects of the design, including ramps to be added to make the bridge accessible to people with disabilities, preservation of historic materials like the original bricks on the walkway, and the carefulness to be taken in work on all components of the historic Aqueduct bridge.

However, two important elements of the plan - the lighting proposal and the eight-foot height and oppressive design of the safety fence - met with vehement opposition from those who testified. Nevertheless, the Commission voted its approval of the entire proposal. 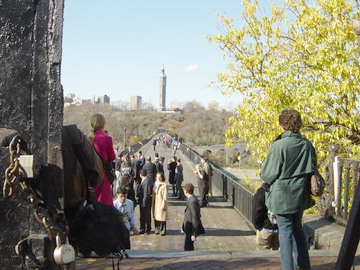 The Daily News commented critically on the safety fence in an editorial on April 7.

The paper also ran a news article on the subject in the same issue.

Review of the proposal by New York State preservation officials, the Section 106 process, is still underway. Comments on the plan submitted by Friends of the Old Croton Aqueduct to the state's Historic Preservation Office can be downloaded HERE.

Treasures of the OCA

Managing Garlic mustard on the Aqueduct Trail during the Pandemic

Saving trees from the strangling vines