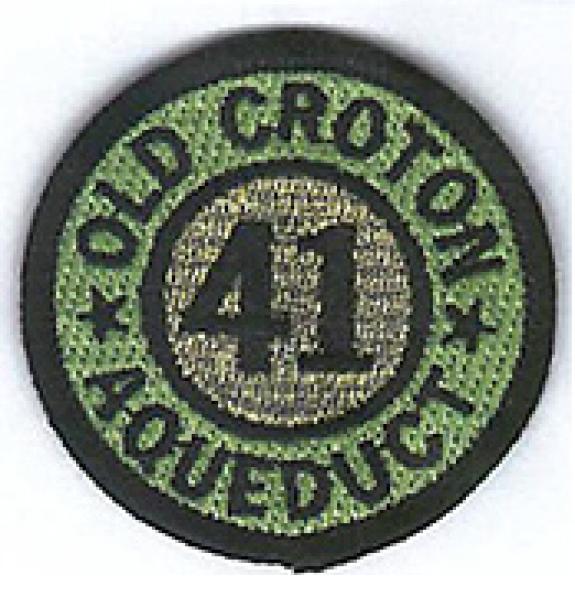 Over several days during the holiday week of 2019-2020, I was inspired to achieve a goal that I have often thought about: walking the entire 41-mile length of the Old Croton Aqueduct historic trail. Although there are certain sections of the park that I frequently visit, large swaths were, up to this point, unknown to me. It was a real pleasure to finally get out and see what the rest of the Aqueduct trail has to offer! I was not disappointed by my discoveries!

Day 1: Bryant Park to Jerome Park Reservoir
I started my journey on Christmas Day. Planning to tackle the route from south to north, I headed down to Bryant Park on the subway from my home in Inwood (upper Manhattan). The streets of Midtown Manhattan were mercifully empty and I was able to catch a glimpse of the Rockefeller Center Christmas Tree and the giant menorah at Grand Army Plaza. I crossed Central Park at the height of the morning dog walker activity, which was delightful! Walking through the Upper West Side I was glad for all the notations on the Friends' map of historical sites and points of interest that I had never taken notice of before. I continued through Hamilton Heights and Sugar Hill passing through blocks of beautiful old townhouses that gave off an aura of bygone days. The High Bridge was the climax of the day's journey-- although I’ve crossed it many times already it always gives me a feeling of awe and gratitude that our organization and the City were able to restore this gem to serve as a public space once again. The "Aqueduct Walk" in the Bronx was surprisingly pleasant. I finished the day at the southern end of Jerome Park Reservoir, following Kingsbridge Road down the hill to return to my home.

Day 2: Jerome Park Reservoir to Tarrytown
On Saturday December 28th, I set out from home with the lofty goal of walking from 215th street in Upper Manhattan to Tarrytown. The Tappan Zee Bridge is a lovely backdrop to the views from Inwood Park, and being fond of long walks, I've been waiting to try hiking up to it, on one or the other side of the Hudson River. The 41-mile Aqueduct expedition provided the ideal opportunity!

The trail from Kingsbridge Road to Tibbetts Brook Park is familiar territory to me. I find the section in Van Cortlandt Park to be one of the nicest stretches of hiking path within New York City. North of Tibbetts Brook Park, though, was a new experience. The east-west transversal through Yonkers was a little depressing but after that, things rapidly improved. I was amazed by the views of the Palisades and the Hudson River that opened up through the bare tree branches. The villages and towns that I passed through were inviting, almost making me regret that I had a destination to reach, and could not explore the winding side streets.

I have been wanting to visit Untermyer Park for a long time, so when I finally reached the gate on the Aqueduct Trail, I knew I would sidetrack for a steep climb into its breathtaking gardens. The stone structures and artifacts were awe inspiring as was the view from the top of the hill! Wishing I could stay longer, I had a quick lunch under the trees and shouldered my pack. The Keeper's House in Dobbs Ferry was well within my sights! Although it was not particularly planned, I was glad to finally have the chance to visit it following the progress of the restoration project. I spent about half an hour talking to the docent there and checking out the exhibit.  I thought the old architectural drawings were fascinating. They really brought to light the enormous effort, design and planning of the great Aqueduct beneath my feet. At the detour point around the NY State Thruway I took a premature turn and lost some ground. I decided to just follow Route 9 to the Tarrytown Metro North station and call it a day. The Tappan Zee bridge hovered over the river in the dusk like some other-worldly monument.

Day 3: Irvington to Ossining
Not wanting to "cheat" and skip any section of the trail, I opted to retrace my steps from Irvington to Tarrytown and continue on from there to Ossining for Day 3. I had rested for a couple of days since the previous leg of my walk - Day 2 covered almost 19 miles and left me utterly exhausted! The town was still sleeping when I disembarked from the Metro-North train and headed up Main Street to the OCA. This time I took the correct detour around the Thruway, making my way through Lyndhurst, Tarrytown, and Sleepy Hollow. I had been looking forward to checking out Rockefeller State Park Preserve; crossing into its boundaries felt almost surreal - I knew it was quite special. As I strode along I promised myself to return on another day, with the sole purpose of visiting the trails and roads that, for now, I had to leave unexplored in the interest of reaching my chosen destination.

The rustic landscape sparked my imagination and I tried to envision what things were like while the Aqueduct was being built.

Approaching the Village of Ossining from the south side was a new perspective. Tired but appreciative of the unfamiliar, I made my way down the steep sloping Main Street to the Metro-North station and headed home - one more day to go!

Day 4: New Croton Dam to Ossining
I opted to complete the final leg of my trek in mostly the opposite direction. I have done this particular section of the trail many times and it has been a favorite hike of mine for years. I begin in the town of Croton-on-Hudson, at the Metro-North Station, making my way through the quiet suburban streets to the beautiful Silver Lake Park. I always stop there for a few minutes at the small beach alongside the trail to listen to and admire the lively Croton River as it frolics and gushes among the rocks, stalling only briefly by the small dam to, perhaps, admire in turn the rustic frame wherein it has momentarily landed. I followed the well-traveled trail to the spur which leads down to the Quaker Bridge; there a steep but quick climb up Quaker Bridge Road brought me back to the Aqueduct. I enjoyed the feeling of remoteness on this section of the trail, walking the last miles to the end – to the beginning, really -- of the OCA, to be rewarded with the grand view of the New Croton Reservoir and Dam. The assortment of hawks circling above the spillway was, and always is, impressive. I lingered in the area for some time, meditative in the winter landscape. After a while I returned to the Aqueduct trail and finished my mini-expedition with the familiar walk in Ossining. I had finally experienced the full length of the OCA, discovering a few more of its treasures and yet leaving many stones unturned for future exploration. Thanks to the Friends of the Old Croton Aqueduct for inspiring me to set this goal and accomplish it!

"One Man's Journey: A Walk on the Croton Aqueduct Trail"